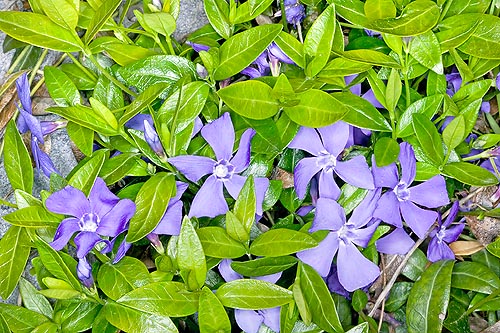 The Vinca minor is known, since ages, for its medicinal virtues © Giuseppe Mazza

The Vinca minor L. (1753) is native to hedges and shady woods of southern Europe and of the central one up to the Caucasus, both in the plains and in the hills ; in Italy, it is native all over its territory, Sicily included, but Sardinia.

The name of the genus, after some, comes from the Latin “vincire” = to tie up, with reference to the thin and strong stems utilized for making wreaths, after others, from “vincere” = to prevail, as it is evergreen and, therefore, able to “prevail” over the winter.

The Latin name of the species “minor” = minor, has been given in order to distinguish it from the similar plant Vinca major.

Perennial herb with thin training stems, long up to about 1 metre, and rooting at nodes with opposite leaves, lanceolate, of glossy dark green colour, long up to 3-4 cm. From the trailing stems, in spring, come out the floriferous branches, initially upright, tall up to about 30 cm, with solitary flowers of 3-5 cm of diameter, which appear at the axil of the leaves on a long peduncle. 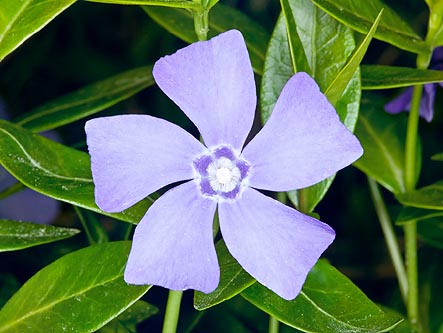 The petals, somewhat irregular, are spatulate, with a generally violet-blue colour, more occasionally, white or pink. The fruits are spindle-shaped follicles containing thin seeds, long 7-8 mm. It easily reproduces by division of the stolons.

Plant known since remote ages in the popular medicine, it contains, as a matter of fact, several alkaloids, potentially toxic if ingested, the most important being the vincamine, utilized also in current medicine, in appropriate dosage, as periphery and coronary vasodilator. As ornamental plant, it is usually employed as groundcover in shady locations and in wet and rich of humus soils.

Vinca minor was last modified: May 6th, 2018 by Giuseppe Mazza