The licentious violets. Violets like to change colour, naturally unfaithful they easily hybridise. How to cultivate them. 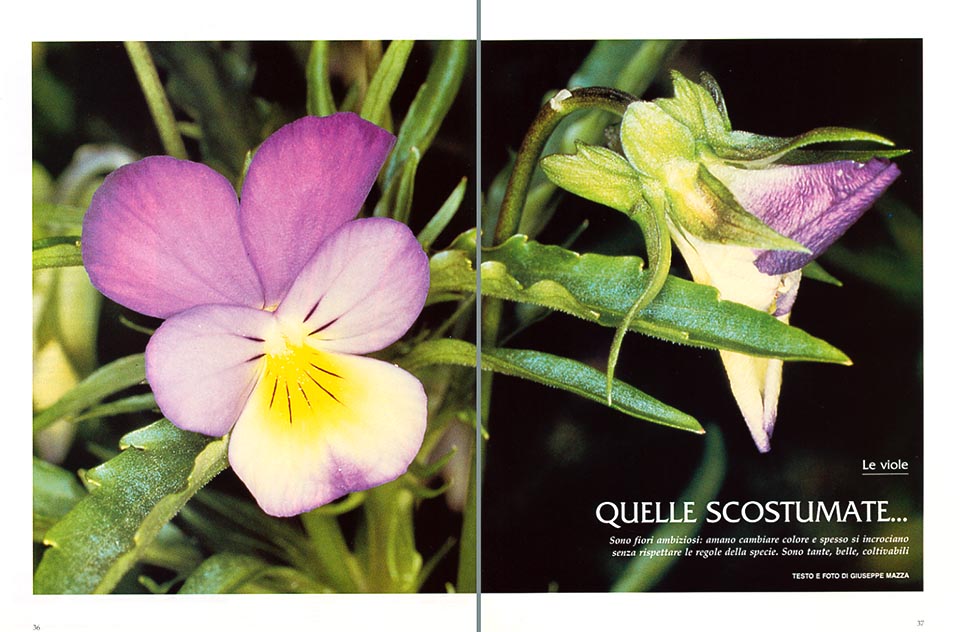 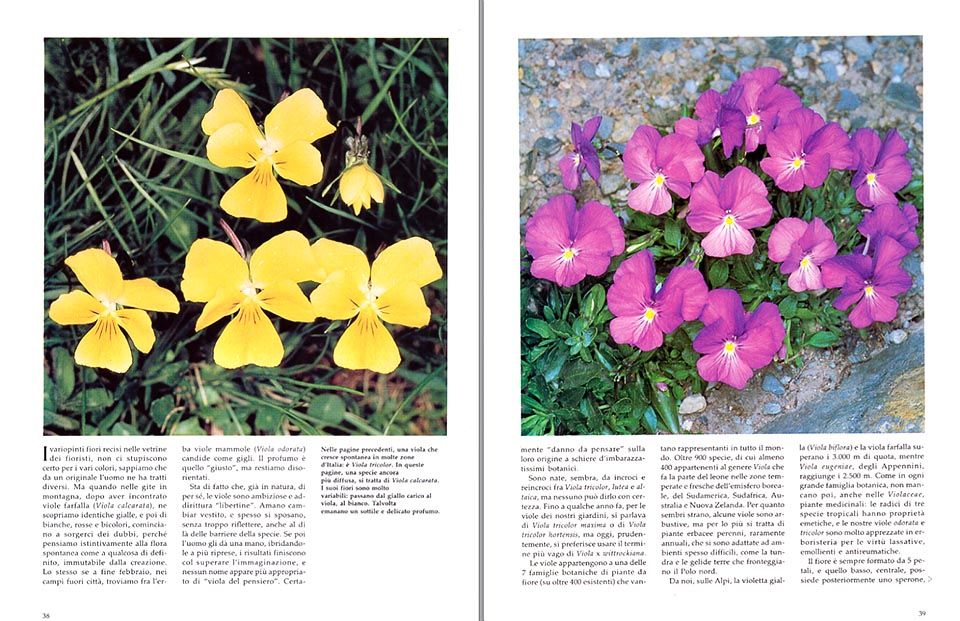 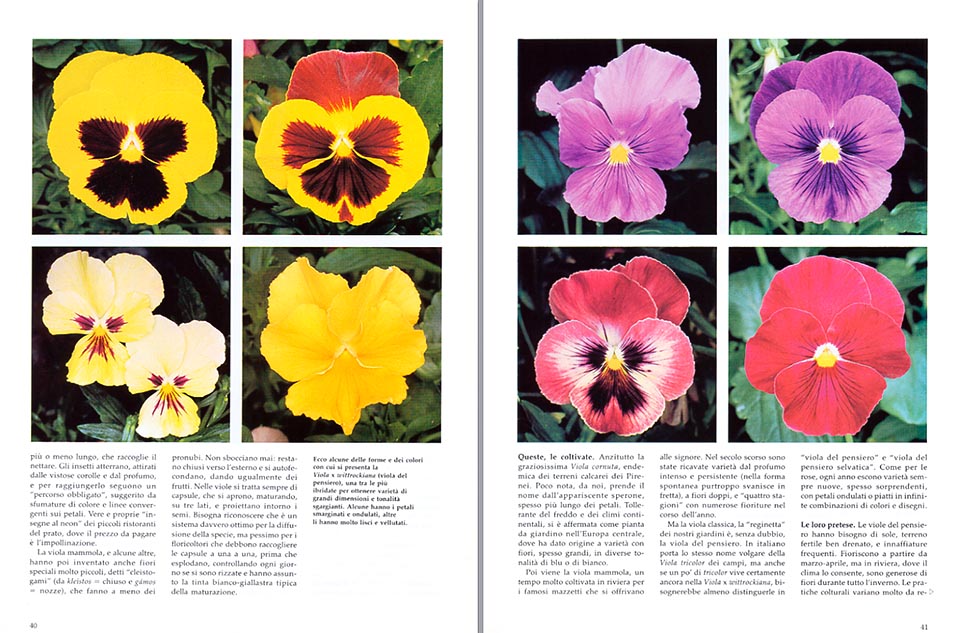 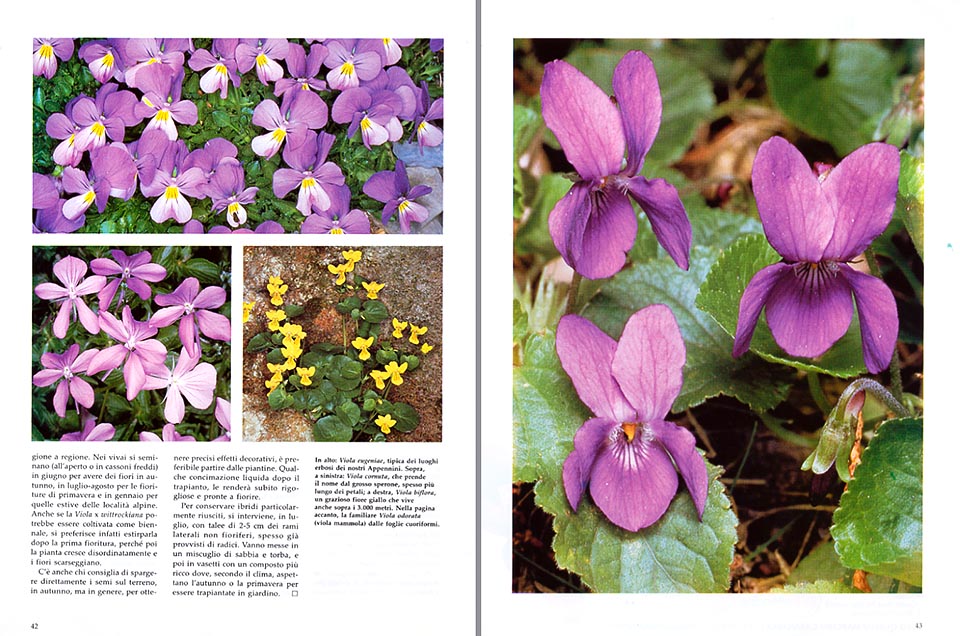 The many-coloured cut flowers which ogle from the shop windows of the florists, and the white, red and violet hyacinths, which we have just received, do not by sure astonish us for their colour. The man has pulled out different ones from the original, and this is normal.

But when, during our excursions up in the mountains, after having made some small bunches of Butterfly Violet (Viola calcarata), we discover some identical ones, but yellow, and then, white, red and two-coloured, then we start getting some doubts, because, by instinct, we think to the spontaneous flora as to something of definite, unchangeable since the creation.

The same happens if, by the end of February, in the fields out of the cities, we find, between the grass, some Sweet Violets (Viola odorata), as candid as lilies. The perfume is the right one, but we are puzzled, and we do not know if to pick them up, for preparing, later on, at home, some candied violets.

The fact is that, already in the wild, by themselves, the violets are ambitious and libertine.

They love in changing suit, and get married often, without too much thoughts, even beyond the barriers of the species.

If then, the man helps them, hybridizing them several times, the results overcome the imagination, no other name appears more suitable than “Pansy”.

With their fanciful drawings, they recall small dwarfs with nice little smiling faces, they evoke, in the books, remote memories, and, above all, “give matter to think”, about their origin to crowds of very embarrassed botanists.

They were born, it seems, from crossing and re-crossing between the Viola tricolor, the lutea, and the altaica, but nobody can confirm this with certainty.

Until few years ago, for the violets of our gardens, they were talking of Viola tricolor maxima, or of Viola tricolor hortensis, but now, prudently, they prefer to use the more indefinite term of Viola Wittrockiana-Hybriden.

As for them, the violets, the quarrels and the puzzles do not interest much, proud, as they are, of belonging to one of the seven botanical families of flower plants (on more than the existing 400), which boast representatives all over the world. More than 900 species, of which at least 400 belong to the genus Viola, which has the lion’s share in the temperate and cool zones of the boreal hemisphere, of South America, South Africa, Australia, and New Zealand.

However much funny it may seem, some violets are shrubby, but most of them are perennial, herbaceous plants, seldom annual, which have adapted to often difficult environments, such as the tundra and the chilly lands which face the North Pole.

In our country, on the Alps, the Yellow Wood Violet (Viola biflora), and the Butterfly Violet, overcome the altitude of 3.000 metres, while the Viola eugeniae of the Apennines, reaches the 2.500 metres.

Like all botanical families, also in the Violaceae are not missing the medicinal plants: the roots of three tropical species hold emetic properties, and our violets odorata and tricolor are very much appreciated in herbalism, for the laxative, emollient and anti-rheumatic virtues.

The flower is always formed of five petals, and the low one, central, holds on the back a spur, more or less long, which collects the nectar. The insects land, attracted by the showy corollas and the perfume, and, to reach it, follow a fixed course, suggested by gradations of colour and lined converging on the petals.

Real and proper “neon signboards”, of the small restaurants of the meadows, where the price to pay is the pollination.

The Pansies, and few others, have then invented also special flowers, very little, called “cleistogamous” (from kleïstos = closed, and galos = marriage), which do not need the pollinators. They never blossom: they remain closed towards the outside and self-fecundate, producing, all the way, fruits.

In the violets, it’s always matter of capsules, which open, while ripening, on three sides, and throw the seeds around. Very good system for the diffusion of the species, but quite bad for the floriculturists, which have to pick them up, one after another, before their explosion, verifying every day if they have raised and have assumed the white-yellowish dye, typical of the ripening.

But, which ones are the horticultural species?

First of all, the very charming Viola cornuta, endemic of the calcareous soils of the Pyrenees. Not too much known, in our country, it does not get the name from sad events of conjugal unfaithfulness (all the violets, but the cleistogamous ones, which practise the incest, are potentially unfaithful), but from the striking spur, often longer than the petals.

Tolerant of the cold and the continental climates, it has made itself known as garden plant in central Europe, where has originated cultivars with flowers, often big, in various shades of blue or white.

Then comes the Sweet Violet, time ago very much cultivated in the Riviera, for the famous little bunches which were offered to the ladies. As the delicate perfume reveals, the humble presence of the sweet violets between the grass, the mini bouquets of violets, were symbolizing the various virtues of the ladies, hidden by the modesty, but pointed out, in spite of that, by their actions.

In order to fully exploit their “seducing” endowments, during the last century, they have obtained varieties with strong and persistent perfume (this, unluckily, in the spontaneous form, fades quickly), with double flowers, and “four seasons”, with several flowering during the year.

But the classical violet, the beauty queen of our gardens, is, without doubt, the Pansy.

In the Italian language, it has the same popular name of the Viola tricolor of the fields, but, even if a little of tricolor surely still lives in the Viola Wittrockiana-Hybriden, I think it should be necessary to distinguish them in “Pansy”, and “Wild Pansy”.

Like roses, always new cultivars come out every year, often surprising, with wavy or flat petals, in endless combinations of colours and drawings.

The Pansies need sun, fertile and well drained soil, and frequent watering. They flower from March-April, but in the Riviera, where the climate allows it, they are generous of flowers during the whole winter.

The cultivation practices vary much between the regions. In the nurseries, they are seeded (in open air, or in cold large cases), in June, in order to get flowers in autumn, in July-August, for the spring flowering, and in January, for the summer ones, of the Alpine locations.

Even if the Viola Wittrockia-Hybriden might be cultivated as a biennial, they prefer, in fact, to uproot it after the first blooming, because, after that, the plant grows up untidily, and the flowers are lacking.

There is also somebody who suggests to scatter the seeds directly on the ground, in autumn, but, usually, in order to get precise ornamental effects, it is preferable to start from the small plants. Some liquid manuring after the transplant, will render them, at once, luxuriant and ready for flowering.

For conserving particularly successful hybrids, we shall intervene, in July, with cuttings of 2-5 cm of the non floriferous lateral branches, often already provided with roots. They must then to be placed in a mixture of sand and peat, and later, in small pots,with a richer compound, where, depending on the climate, they wait for the autumn, or the spring, for being transplanted in the garden.

To boil, in one litre of water, 1 kg of sugar with a knob of glucose, until obtaining a syrup at the 35-40% (can be measured with a syrup weigher). Then, submerge, rapidly, the flowers of the Sweet Violets, and take them off with the skimmer, placing them, for drying up, on a grating.

→ To appreciate the biodiversity within VIOLACEAE family please click here.

Violets : they hybridize easily for kids enjoyment was last modified: May 22nd, 2019 by Giuseppe Mazza