Misteltoe, the greetings plant of one thousand secrets. Lives on 170 different plants, but is not a parasite. History and legends. The flowers have orange scent. Medicinal uses. 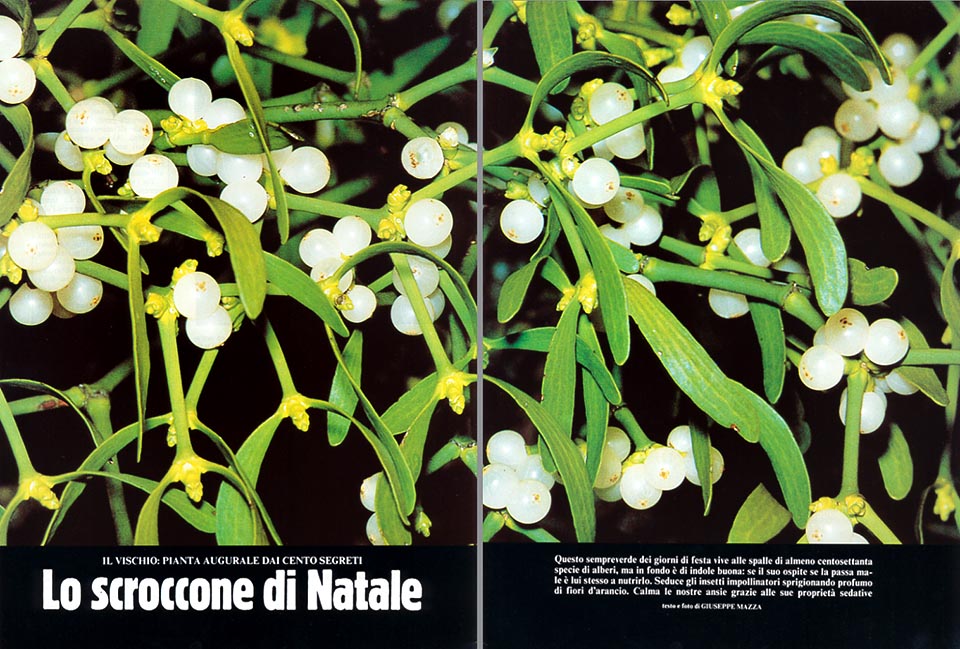 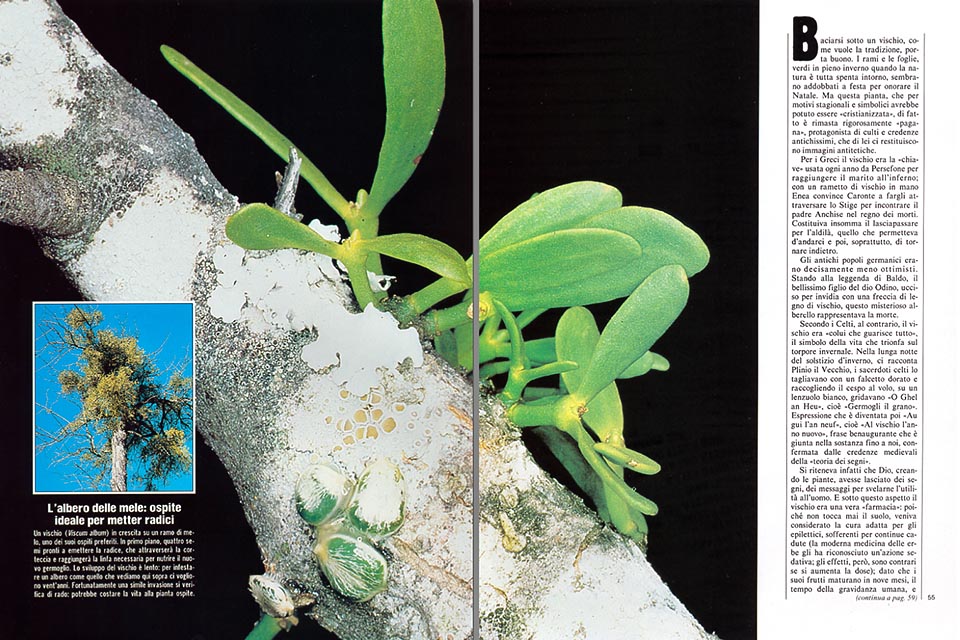 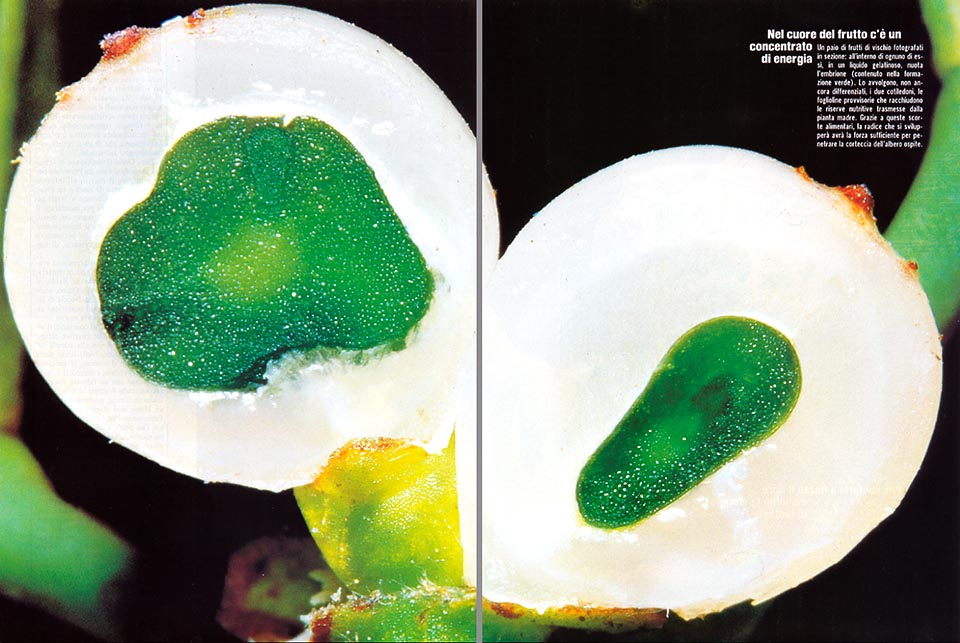 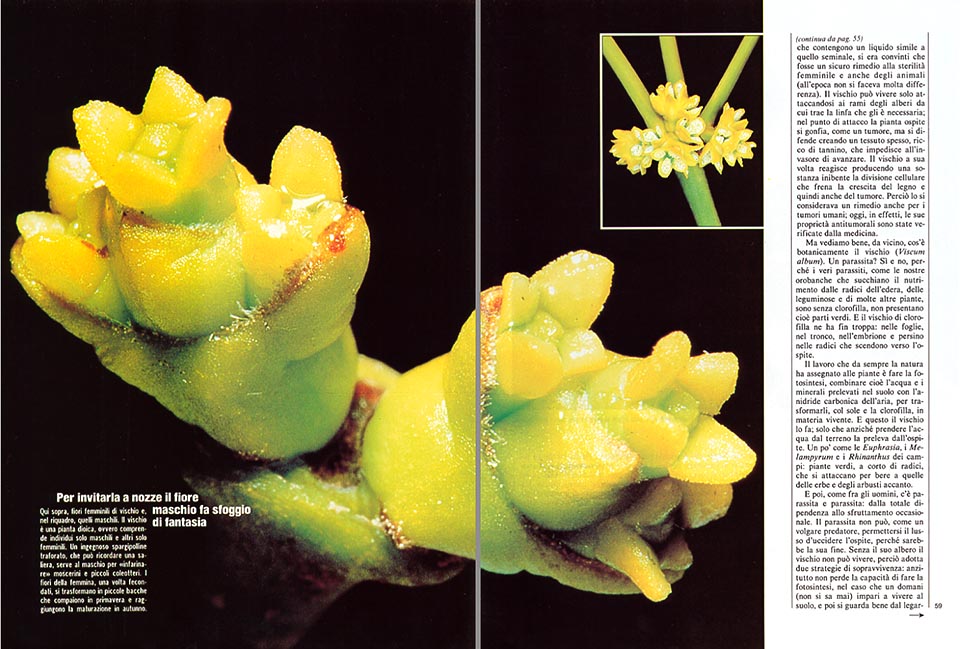 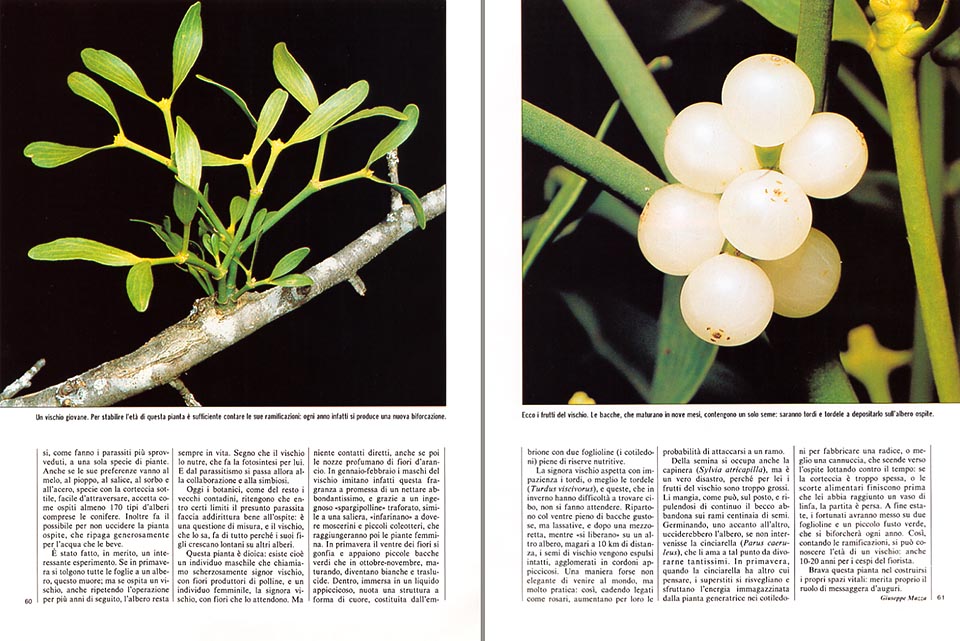 Kissing each other under a mistletoe on the New Year’s Day, brings good luck.

The branches and the leaves, as green as the life in the middle of winter, when, around, the nature is all dull, seem decorated for the festivities, like the Christmas Tree, for the birth of the Holy Child; but, even is, for seasonal and symbolic reasons this plant might have been easily “converted to Christianity”, it has remained strictly “heathen”, remainder of very old worships and beliefs.

For the Greeks, the mistletoe was the “key” used every year by Persephone to reach her husband in the Hades during the winter months; and it’s with a small branch of mistletoe in his hand, that Aeneas convinces Charon to let him cross the Styx for meeting his father Anchises, in the dead kingdom.

It was, therefore, the pass for the other world, which was permitting to go there, and then, what is more important, to come back.

The ancient Germanic peoples where, definitely, less optimist. After the legend of Baldr, the very handsome and invulnerable son of the god Odin, killed for envy with an arrow made with wood of mistletoe, this mysterious sapling, the only one, who, being too young, had not sworn to respect him, was representing the fading away of the light of the sun, and, therefore, the death.

But, for the Celts, on the contrary, the mistletoe was “He who cures everything”, the symbol of the life which triumphs over the winter numbness.

Opposite images, but, after all, not so much distant, which here superpose, because it is not easy to separate the good from the evil, the beginning from the end, the death of the seed from the birth of the new plant.

During the long winter solstice night, Pliny the Elder relates, the Celtic priests, white dressed, were cutting it, with solemnity, with a golden reaping-hook, and seizing the tuft, on a white sheet, were shouting “O Ghel an Heu”, that is, “Let the Wheat germinate”. Expression which, later on, became “Au gui l’&n neuf”, that is “To the mistletoe the new year”, a phrase of good wishes which has come, in the substance, till our times, confirmed by the medieval beliefs of the “theory of the signs”.

They believed, in fact, the the Good Lord, while creating the plants, had left some marks, messages to the men, for disclosing them their utility.

And under this point of view, the mistletoe was a real mine. As it never touches the soil, it was used for curing the epileptics, who, often, fall down on the ground (the modern medicine, has, in effect, recognized to it a sedative action, which, however, reverses with the dosage), and as its fruits ripen in nine months, the time of the human pregnancy, and contain a white and glutinous liquid, similar to the semen, they were persuaded that it was a sure remedy to the women and the whole livestock sterility (at that time, they were making not too much difference).

Finally, as in the point of junction, the host plant swells, like if it had a tumour, it was, by sure, curing also these last ones.

And even if it seems absurd, nowadays, the anti-cancerous properties, have been ascertained, and verified chemically. In fact, the host plant defends itself, creating a thick tissue, rich of tannin, which does not allow the mistletoe to advance, and that this, in its turn, reacts with a product which inhibits the cellular division, which slows down the growth of the wood and so, also of the tumours.

But let us see well, at close quarters, what is botanically, the mistletoe.

Yes and not, because the true parasites, like our broomrapes which suck the nourishment from the roots of the ivy, of the fabaceae, and of many other plants, are without chlorophyll, that is, do not present green parts.

And the mistletoe has even too much chlorophyll: not only on the leaves, but also in the stem, in the embryo, and even in the roots, which go down towards the host.

The job which, always, the native has given to the plants, is to make the photosynthesis, which is, to combine the water and the minerals taken off from the ground with the carbon dioxide of the air, transforming them, with the sun and the chlorophyll, in “vegetable meat”, in living matter. And this is done by the mistletoe; only, instead of taking the water from the ground, it takes it from the host.

Something like the Euphrasia, the Melampyrum and the Rhinanthus of the fields: green plants, lacking of roots, which stick on, for getting the water, to those of the nearby grasses and shrubs. A phenomenon substantially identical, even if less evident, as it takes place, all, under the ground.

And then, as for men, there is parasite and parasite: from the total dependency, to the occasional exploitation.

The art of having the others working is an old one, subtle, which requires astuteness and far-sightedness: the parasite cannot, like a common predator, to afford killing the host. The death of the hen which lays the golden eggs, is also, almost always, its end; and unless being a dodder, which yellows and does not work, when it cannot suck a plant, and becomes green again and makes the photosynthesis if the host dies, in nature, much more than for the men, the “reconversions”, are difficult.

Without its tree, the mistletoe is dead, but being aware of this risk, it adopts two survival strategies: first of all, it does not lose the capacity of producing the photosynthesis, in the case that one day (who knows!), it learns to live on the soil, and then pays great care not to tie up with only one species, as the more unprovided parasites do.

Even if the preferences of the Viscum album go, decidedly, to the apple-tree, the poplars, the willow-tree, the service-tree, and the maple, species with thin bark, easy to go through, it accepts as hosts at least 170 types of trees, and attacks, with two races, also the conifers.

Moreover, it is doing its possible not to kill the host plant, which repays, cash, for the water it drinks.

An interesting experiment has been carried on as to this matter. If in spring, we cut, one by one, all the leaves of a tree, this will die; but if it gives hospitality to a mistletoe, even if repeating the operation for several consecutive years, it remains always alive.

This means that this nourishes it, and makes the photosynthesis for it, too.

And from the parasitism we pass then to the collaboration and the symbiosis: nature is definitely much less schematic than us.

Nowadays, botanists, as anyway were doing the old countrymen, believe that, within certain limits, the presumed “parasite”, does the host good: it is question of moderation, and mother mistletoe, which well knows this, does all the possible so that its offspring grow up, far away, on other trees.

But no direct contacts, no infatuations or love disappointments, even if, later, the marriage perfumes, very romantically, of orange blossoms.

In January-February, the males of the mistletoe imitate, in fact, the fragrance as an advertisement of a very copious nectar, and thanks to an ingenious perforated “pollen spreader”, similar to a salt cellar, thoroughly powder midges and small coleoptera, which will then reach the feminine plants, fecundating them.

In spring, the Ladies are already pregnant: the belly of their flowers swells and we can notice some small green berries, which, in October-November, ripen, becoming white and translucent. Inside, embedded in a sticky liquid, like in a space craft, a heart-shaped embryo swims, with its two small leaves, the cotyledons, full of nourishing reserves.

Mother mistletoe waits, impatiently, for the thrushes, or better, for the Missels (Turdus viscivorus), and these ones, which in winter do not have much to eat, are not late.

They go away with the belly full of tasty but laxative berries, and, after half an hour, while they release them on another tree, perhaps 10 km far away, the babies are expelled, intact, agglomerated in tacky cords.

It’s maybe, a not very elegant birth, but very practical, because, falling down tied like rosaries, they increase the possibilities to catch a branch.

Of the seeding takes care also the Black caps (Sylvia atricapilla), but it is a real disaster, because, for it, the fruits of the mistletoe are too big.

It eats them, as it can, on the spot, and cleaning continuously the beak, leaves, dangerously, on the branches, hundreds of babies mistletoe.

Growing up, one close to the other, they would, by sure, kill the tree, but a specialist intervenes, the Blue tit, (Parus caeruleys), who loves them so much… to eat them all, one by one.

In spring, when the Blue tit has other things to worry about, the surviving babies mistletoe wake up. They take advantage of the energy stored in the cotyledons, for fabricating a root, or better, a thin cane, which goes down towards the host in a tough war against the time; because if the bark is too thick, and the food reserves end before reaching a vessel of ascending sap, the match is lost.

In summer, the lucky ones will have set up two small leaves and a little green stem, which bifurcates every year. So, counting the ramifications, we can easily know the age of a mistletoe: even 10-20 years for the florists’ tufts.

And we can even ask ourselves if we might manage without this useless Christmas havoc.