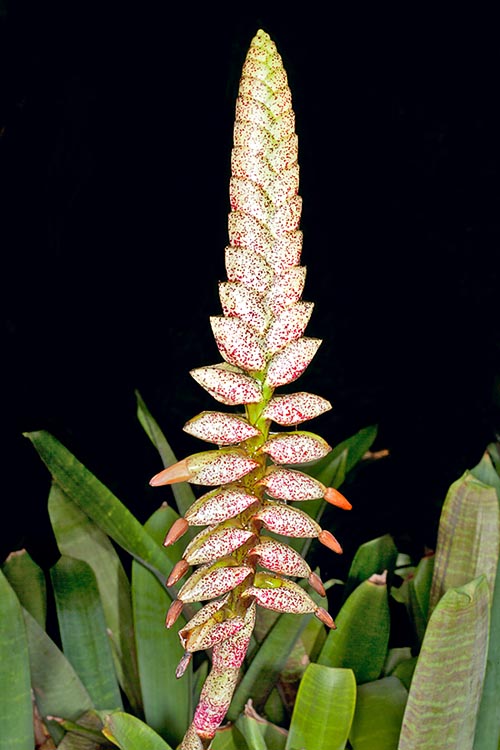 The species is native to Brazil (Espirito Santo), where it grows in the coastal forests on mountain rocky slopes around the 1000 m of altitude.

The Vriesea fosteriana L.B.Sm. (1943) is an evergreen herbaceous species, monocarpic (it fructifies only once then dies), acaulous, epiphytic and lithophytic, presents a funnel-shaped rosette up to about 1 m of diameter formed by numerous coriaceous leaves placed in way to form a central cavity usually full of water.

The leaves are arcuate, oblong, 50-60 cm long and about 10 cm broad, with rounded apex and irregular reddish brown bands interspersed by green or yellowish stripes, in particular in the lower page.

The flowers, rich of nectar, are pollinated by the bats, last one night only and emit an unpleasant smell. The fruits are capsules containing several seeds provided with pappus (feathery appendage which favours their dispersion by means of the wind). It reproduces by seed, by micro-propagation and at amateurish level by vegetative way through the new plants which generate at the base of the plant and that can be detached once they have reached the size of at least one third of that of the mother plant.

Species standing among the most ornamental of the genus Vriesea, in particular due to the foliage, whose colouration intensifies with the light and the age, it has been discovered only in 1940, but has shortly become very popular, has originated numerous hybrids and they have selected different varieties as per the tonality and the colour. Cultivable in open air in the humid tropical and subtropical zones, and marginally in the warm temperate ones, sheltered from the winter rains, where it can stand temperatures up to about -2 °C for a very short period; it requires full sun or slight shade and much aerated, porous, draining and rich of organic substance substrata. Elsewhere, it is to be cultivated in pot in order to shelter it during the colder months in a very luminous location, with lower temperatures which are preferable not to go under the 14 °C, on much aerated substrata, porous, draining, rich of organic substance and with addition of coarse sand. It requires high ambient humidity which may be increased with nebulisations by using water at ambient temperature and not calcareous in order to avoid unattractive spots on the leaves.

In summer it is advisable to leave some water in the central cavity formed by the rosette of leaves, renewing it frequently thus to avoid the forming of any mosquito larval nest, whilst in winter it is good to leave it rather dry, in presence of low temperatures, in order to avoid possible rottenness.