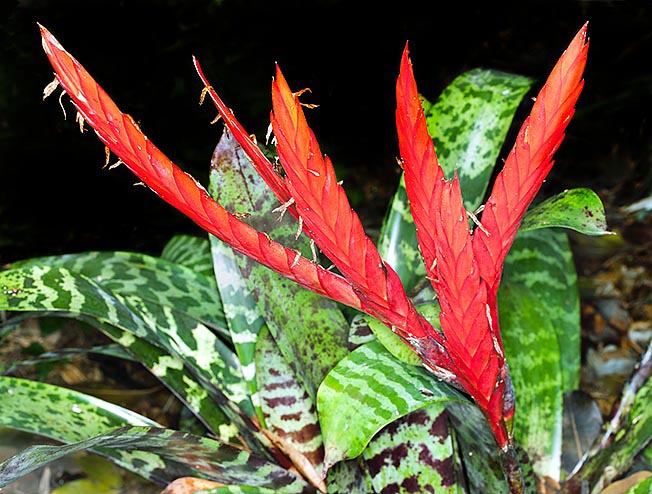 The species is native to Trinidad and Tobago and Venezuela, where it grows epiphytic on the trees in the humid forests or on the calcareous rocks close to waterfalls up to about 600 of altitude.

The genus is honoured to the Dutch botanist Willem Hendrik de Vriese (1806-1862); the name of the species is the Latin adjective “glutinosus, a, um” = slimy, sticky, with reference to the substance emitted by the inflorescence.

The Vriesea glutinosa Lindl. (1856) is an evergreen, monocarpic (fructifies once only and then dies), evergreen herbaceous species, acaulescent, epiphytic and lithophytic, presenting a funnel-shaped rosette formed by several leaves placed in way to form a central cavity usually full of water.

The leaves are oblong, unarmed, 35-45 cm long and 5-6 cm broad, of green colour with purple spots especially on the lower page. The inflorescence at the centre of the rosette, up to more than 1 m long, is formed by a floral scape covered by bracts of pale green colour with dark red spots ending in a compound raceme, that is formed by more racemes departing from a central axis; the single racemes, 35-45 cm long, are covered by imbricate, about 6 cm long bracts placed on two opposite (distichous) rows of bright red colour, glossy due to the slimy substance they emit, persistent for many months, inside which develop the short-lasting tubular flowers of red colour.

Besides by seed, it reproduces by vegetative way through the adventitious plants similar to blades of grass generating at the base of the plant, even well before having reached the floriferous maturity, and which may be detached when they have reached a height of 18-20 cm. Very ornamental species due to the spotted foliage as well as due to the bright long-lasting inflorescence, cultivable in open air in the tropical and humid subtropical climate zones, as it does not bear temperatures close to 0 °C, on the trees as epiphyte or in filtered sunlight rocky gardens. Elsewhere, it can be cultivated in pot, in light substratum, aerated and rich in organic substance, in order to be able to be sheltered in very luminous location during the colder months, with lowest temperatures which are better not to go down under the 14 °C.

It requires a high ambient humidity that may be increased with nebulisations utilizing water at ambient temperature and not calcareous in order to avoid unaesthetic spots on the leaves. In summer, it is better to leave some water in the central cavity formed by the rosette of leaves, renewing it frequently thus to avoid it becomes a larval nest of mosquito, whilst in winter it is preferable to leave it rather dry, in presence of low temperatures, for avoiding possible rottenness.