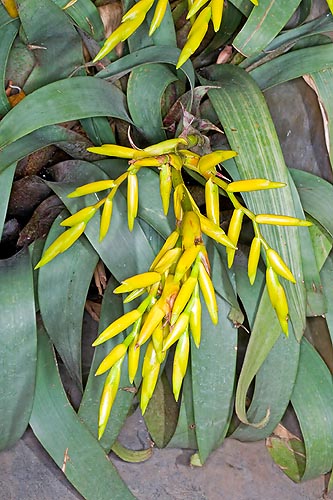 Very used in the Tropics as decorative plant © G. Mazza

The Vriesea saundersii (Carrière) E. Morren (1875) is native to Brazil (State of Rio de Janeiro), where it grows on the rocky slopes and in the humid coastal forests up to 400 m of altitude ; very diffused in the past, is now at risk of becoming extinct due to the anthropic pressure.

The genus is honoured to the Dutch botanist Willem Hendrik de Vriese (1806-1862); the species is dedicated to the English botanist and horticulturist William Wilson Saunders (1809-1879).

Evergreen herbaceous plant, monocarpic (bearing one fruit only during its existence), acaulescent, epiphyic and lithophyte, it has a funnel-shaped rosette, broad about 45 cm and 60 cm (inflorescence included) tall, formed by several leaves placed in way to form a central cavity usually full of water. The leaves are linear, with sharp apex, bent, leathery, about 40 cm long and 6 cm broad, of green grey colour and covered by microscopic grey scales; brown red dots are distributed irregularly on the surface, particularly on the lower one. The inflorescence, at the centre of the rosette, is formed by an about 30-35 cm long floral scape, smooth, provided with bracts similar to the leaves at the base, whilst, upwards, they are shorter and broader, grey green, with brown red dots.

The scape ends with a 20-30 cm long and about 15 cm broad, inflorescence, formed by a compound raceme, that is, formed by several racemes departing from a central axis; the bracts under the single racemes, 10-15 cm long and 6-7 cm broad, are similar to the scape terminal ones. The single racemes are formed by 5-8 flowers about 15 mm distant each other and placed on two opposite lines (distichous), the floral bracts are oval, about 3 cm long and 15 mm broad, of green-yellow colour; the flowers are of sulphur yellow colour, about 5 cm long, with oval, 3 cm long and 1 cm broad sepals. It reproduces, besides by seed, by vegetative way through the new plants which originate at the base of the plant and which can be detached when the have the size of at least one third of the mother plant. Plant of great ornamental value, both for the foliage and the inflorescence, it can be cultivated in open air in the tropical and both humid or with marked seasonality subtropical climates, on the trees as epiphytic or in rocky gardens and on reefs and crags, in full sun, where the leaves assume reddish tones, or in partial shade. Elsewhere, it is to be cultivated in pot on very aerated, porous, draining and rich of organic substance substrata, in luminous position, with temperatures over the 14-16°C, best by 20-24°C.

It is one of most utilized Bromeliaceae due to its compact shape, besides its aesthetic characteristics, in the terrariums. Watering must be regular in summer, but the substratum must be allowed to dry up before giving water again, and reduced in winter and the local humidity, in presence of dry air and high temperatures, can be increased with nebulisations utilizing water at room temperature and not calcareous, thus to avoid anti-aesthetic dots on the leaves. In summer, some water can be left in the central cavity formed by the rosette of leaves, renewing it frequently in order to avoid the formation of mosquito larvae nest, whilst in winter it is better to leave it dry to avoid possible rottenness.