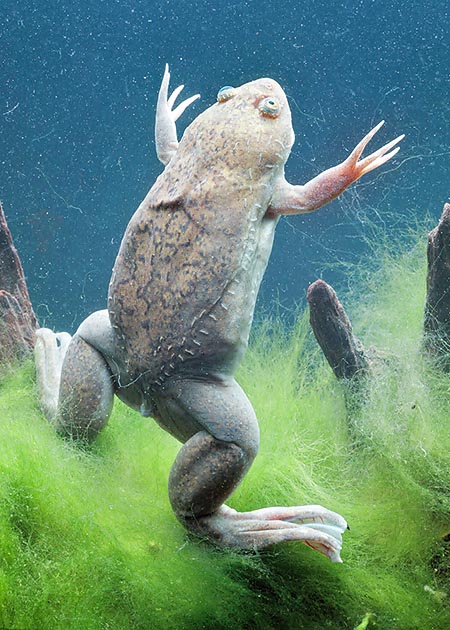 It is an odd anuran amphibian, belonging to the family of the Pipids (Pipidae), remarkable for the exceptional development of the hind legs and employed as laboratory animal. The African clawed frog (Xenopus laevis – Daudin, 1802), is taxonomically afferent to the order of Anurans (Anura), the tail-less amphibians, family Pipids (Pipidae), genus Xenopus. To the family of the Pipidae, carries also the well known South American Surinam toad (Pipa pipa) where one of the oddest reproduction systems is observed.

The African clawed frog is a typical African anuran, in particular of the sub-Saharan Africa.

It is present in the fresh waters (lakes, rivers, swamps, ponds); and is a strictly aquatic species which never ventures on the mainland.

The appearance of this amphibian is quite weird. The body is stocky, much compressed up and gradually narrowed forwards; the head, which does not appear separated from the trunk, is also flattened and is tapered towards the apex which ends in a rounded point. The eyes are less prominent than in most other anurans. All these characters and the unusually smooth skin, permeated with viscous humours, confer an exceptional hydro dynamism, so that it is legitimate to consider these odd amphibians as the best among the swimmers of their order.

As it is logical, the legs are structured in way to facilitate as much as possible the swimming: the fore ones, which might constitute an obstacle, are quite poorly developed and equipped, each one, of four long digits, very thin and sharp, entirely free of webbing. On the contrary, the much more robust digits of the hind legs are completely webbed up to the apex, and are so much muscled to seem, at first glance, rather short; actually, the hind legs, when completely stretched out, are longer than the body. The huge webbed feet have five well developed toes, of which the three inner ones are equipped with a small claw or spur.

The dimensions of this frog are average: the females do not exceed, in fact, the ten centimetres of length concerning the body, whilst the males are quite smaller; this is a permanent character of somatic sexual dimorphism. The colouration is little conspicuous, it merges with the bottom and the aquatic plants of the water basin where it is located. In any case, this colouration may vary depending on the location, thing which is quite common in the anurans. The back and the other upper parts are grey or brownish, with more or less evident pale or dark secretions; the lower parts are white. Furthermore, in both sexes, it is evident a particular texture on the back and the sides recalling the seams of the clothes or the surgical stitches done on the skin.

As stated before, these frogs are strictly aquatic and never reach the banks of the stream or the water basin where they do live. Their biological cycle is normal if compared to that of the Surinam toad. 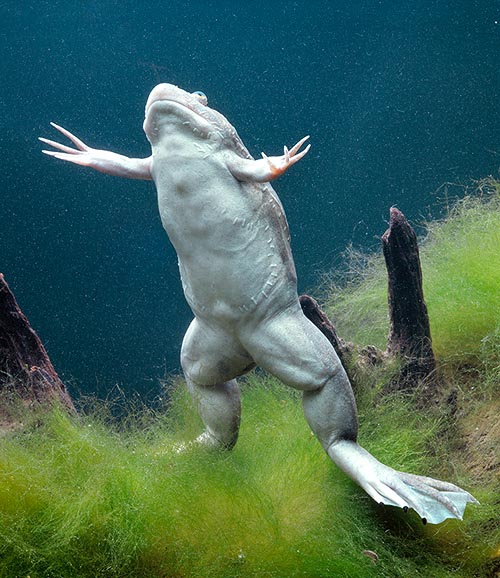 The males emit their mating call mostly during the evening hours, contracting the muscles of the larynx, as they do not have vocal sac(s). The females may either accept or refuse such call, emitting, in their turn, a vocal signal; very uncommon phenomenon in the amphibians. Once the mating starts, the male girds the female from behind utilizing the spurs of the fore legs and, by matching its cloaca to the female’s one, emits the semen inside a chamber, or pseudo-uterus, where the eggs are conveyed. The female eggs of African clawed frog are each one wrapped in a gelatinous capsule where it is also possible to find some haematic traces and are laid in the ponds on rocks, branches and aquatic plants; after the spawning, the mother does not care them and even will not care the due to born offspring.

If the African clawed frogs are strange, their tadpoles are not less odd as, once they have reached a remarkable size, they are already equipped with legs and appear extraordinarily translucent, thus showing, by transparency, many details of their inner anatomy and appear as speckled by numerous small brown spots, formed by “chromatophores”, visible under the skin; the development along with the relevant metamorphosis completes in 7-9 weeks.

These amphibians nourish of aquatic insects (both adults and larvae), of nektonic insects (such as the mayflies, the damselflies or the dragonflies) and of several other species living in the muddy bottom, which, by means of the robust small claws of their hind legs, they move continuously; they nourish also of small crustaceans, as well as, in some instances, of eggs of other amphibians and also (even if quite rarely, thus doing an act of cannibalism), of those of a conspecific. Should the water basins they populate dry up, they may survive for quite long periods by digging into the mud. When swimming, the African clawed frogs dart with surprising rapidity and remarkable elegance; much more awkward, on the contrary, so much to appear ridiculous, is the position they get when they stay motionless in the water, or when they slowly settle on it: in these cases, they spread apart the fore legs, which remain slightly bent and with the toes spread wide, thus assuming an attitude which, to the human eye, looks curiously declamatory.

These frogs are easy to breed and furthermore, if properly stimulated, they may reproduce in whatever period of the year; in the wild, even is they have counted 3-4 reproductive cycles per year, usually they reproduce in spring. The IUCN states that this species is at very low risk of extinction.