Zamia vazquezii D. W. Stevenson, Sabato & De Luca 1996, is endemic to the region of Veracruz, in Mexico, where it grows in the shade of the tropical forest on mainly clayey and deep soils. In this area the rainfall has an annual average of 1500-2000 mm, whilst the temperatures fluctuate between 10-20 °C in winter and 20-30 °C in summer.

The genus Zamia comes from the Greek  “ἀζαίνω” (azaíno) or “ἀζάνω” (azáno) = cone, referring to the reproductive structures of this genus, that recall the strobili of the conifers. The specific name vazquezii,  honours the memory of Mario Vazquez Torres, explorer and naturalist dedicated to the study of the cycads of Central-American regions. The species has been accepted only in 1996 as previously was confused with Zamia fischeri (Miquel 1874), from which it distinguishes for the more erect posture of the leaves, the greater length and the broader folioles. The distinction in two species has been confirmed also by genetic tests. 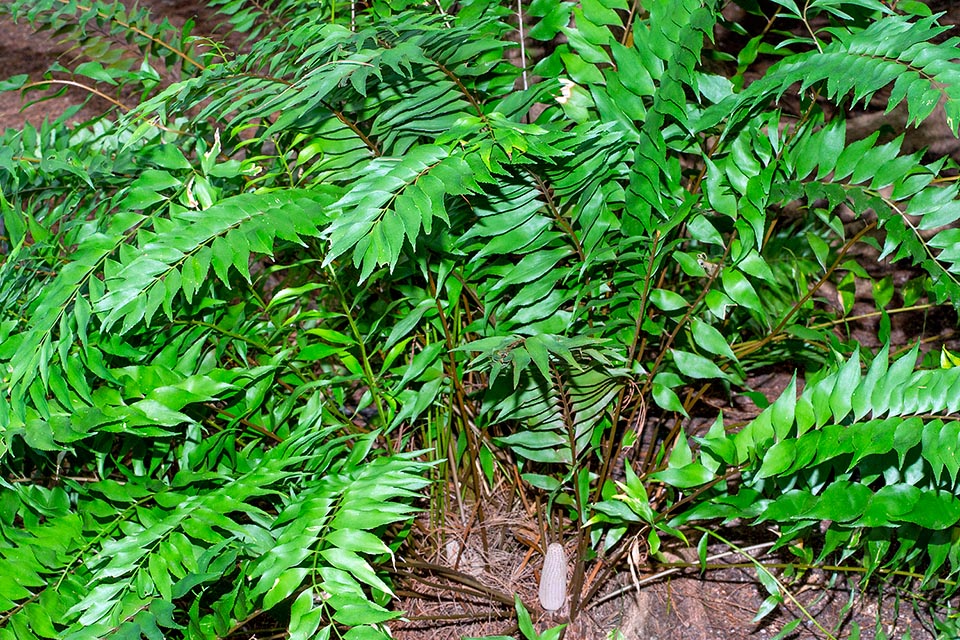 Almost extinct in nature, Zamia vazquezii is endemic to the region of Veracruz, Mexico, where grows in the shade of the tropical forest on clayey and deep soils © G. Mazza

Zamia vazquezii displays a tuberous underground stem, that can be 35 cm long and has a diameter of 12 cm, that, with the age, tends to ramify.

The foliar crown is usually formed by 4 to 6 fronds having a rather erect posture, about 1 mm long and 16-29 cm broad, of brownish colour when emerging, shading then to the pale green when mature. The petiole is elongated, circular in transversal section and tapering towards the apex, without grooves or ridges, stipulate, about 40 cm long, of 4 mm of diameter, unarmed or rarely equipped with tiny scattered spines. Along the rachis are distributed about 14-26 couples of sessile folioles, of papyrus consistency, opposite or sub-opposite, ovate or obpyrifom, acuminate, in a non uniform way, with almost cuneiform basis, 7,5-12,5 cm long and 2,5-3,8 cm broad, with slightly serrated margin. 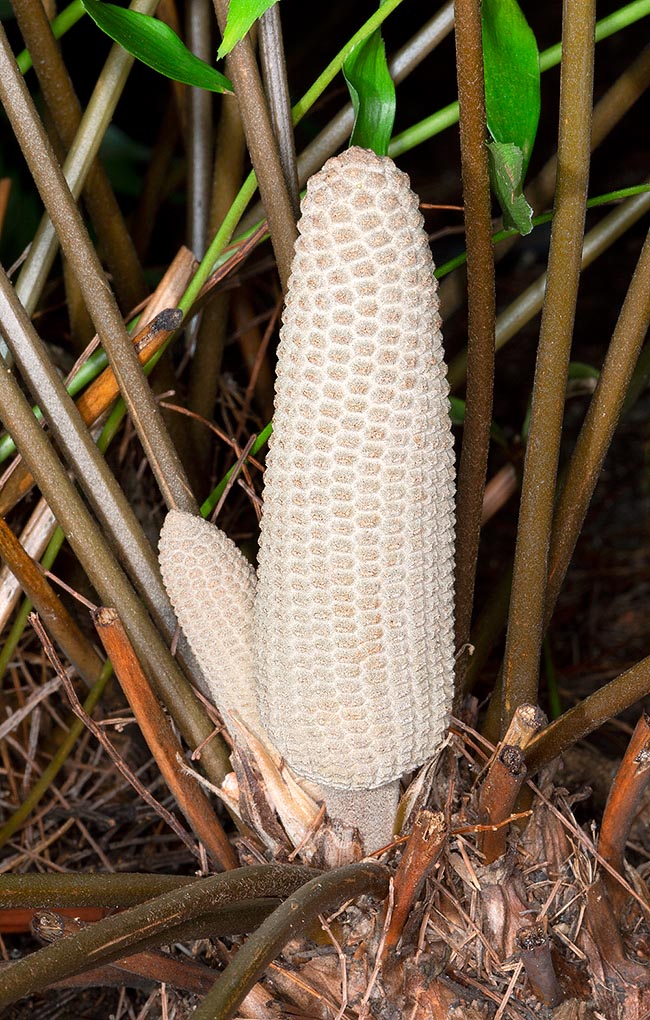 Male cones can be 10-11 cm long with 2-2,6 cm of diameter. The microsporophylls are shaped like a blunt wedge © Giuseppe Mazza

The female cones are solitary, cylindrical to ovoid-cylindrical, erect, 15 cm long and 5-7 cm broad, with a tomentose appearance, of grey to grey-brown colour, blunt and apiculate apex, 2,5-3 cm long peduncle, of 6-7 mm of diameter, brown tomentose.

One to three male cones, ovoid to ovoid-cylindrical conical, 10-11 cm long and of 2-2,6 cm of diameter, thickly tomentose, of grey colour, erect until the dispersion of the pollen.

Microsporophylls, shaped like a blunt wedge, hexagonal front, 3-4 mm tall, 7-10 mm broad, more or less flat, with indistinct facets, but the terminal one that is slightly depressed.

Zamia vazquezii unites, inside the species, three distinct forms, all confined in the coast of the Gulf of Mexico, between Hidalgo, San Louis Potosí and Veracruz.

All three forms have female cones that remain densily tomentose and grey.

Among the two forms of San Luis Potosí and Hidalgo, one distinguishes for the pale green folioles, the cuneiform appearance and a prominent dentation along the margin, whilst the other shows long folioles, almost linear and deeply toothed.

The third form is that of Veracruz and is morphologically like those of Hidalgo-San Louis Potosí, but is twice bigger, under every aspect. It is very rare and is localized in the territory north to Veracruz, where have remained only few specimens. It is the form on which is based the description of the species.

The activities of research and study on the taxon proceed with difficulty as the complex Zamia vazquezii. has been greatly depleted and now few are the plants still remained “in situ”.  The great number of specimens removed the traffickers of plants, along with the continuous destruction of the habitat done by the human activities, have almost caused the extinction of the population in nature.

Zamia vazquezii and its forms is easy to cultivate and can be purchased in nursery even big specimens that compete, under the ornamental profile, with those of the origin locations. In the same time the cultivated plants usually emit a greater number of cones, that, through the artificial manual pollination, allow to get a good quantity of fertile seeds. The young plants grow up quickly and the fertility, reached with the emission of the cones, can be obtained jn few years. 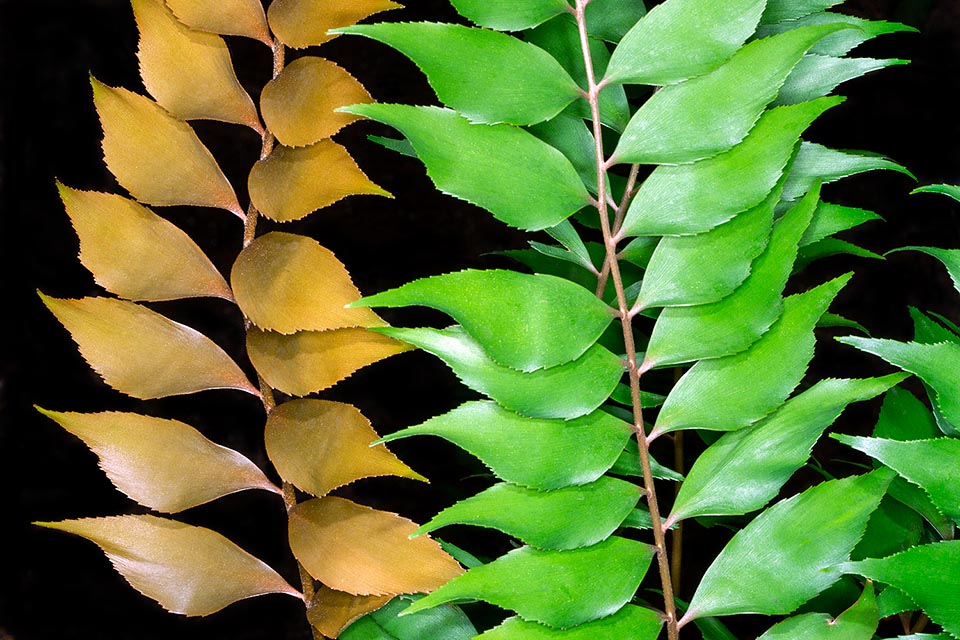 Rare in nature but frequently cultivated, is an appreciated ornamental plant due to the contained size and the elegant drooping posture of the bright green and bronze leaves while growing. Resists short frosts without serious damages adapting to shade situations and full sun, but sufficient humidity must be provided © Giuseppe Mazza

Thanks to the rather contained dimensions, the absence of spines, the leaves easily flexible and the adaptability to the conditions of poor lighting, Zamia vazquezii is cultivated and appreciated as ornamental plant. In garden, it adapts well to the conditions of full sun as well as of shade, provided that a sufficient humidity is maintained. It reveals a good tolerance to cold and the leaves can withstand short-lasting frosts without serious damages.

Under the phytosanitary profile Zamia vazquezii can be infested with mealybugs, whose damages to the emerging leaves can compromise the development of the whole crown and, in the most serious instances, may cause the death of the plant.

Zamia vazquezii now considered as a species under risk of extinction (IUCN Red List), is inserted in the Appendix II of the Convention on International Trade of Endangered Species (CITES).