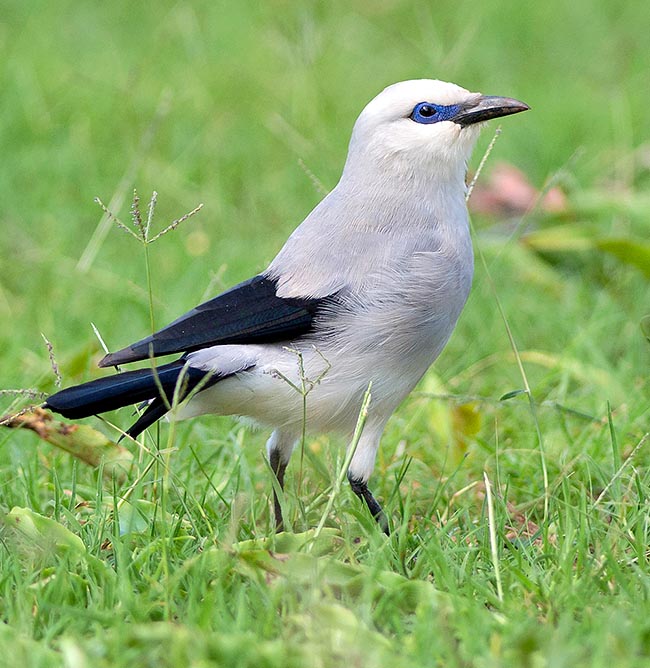 The rare Stresemann’s bushcrow (Zavattariornis stresemanni Moltoni, 1938) is a bird endemic to South Ethiopia belonging to the order of the Passeriformes and to the family of the Corvidae.

Who knows whether captain Vittorio Bottego during his ominous pioneering campaign of the late nineteenth century in the valley of the river Omo, to which later on was dedicated the name, did ever have the pleasure of meeting along his way this bird or to understand of having met a unique being of its genus that lived isolated in that corner of the world since unimaginable times?

Sure that with his quarrelsome and intolerant character he did not care too much and was interested only in populations to submit, areas to conquer and altercations with local tribal leaders to solve in his favour, so much that this way to treat with the local aborigenes led him to be badly killed by a Houalla leader.

Still many years had to pass before that this bird was identified and classified, only specimen of a unique genus. It was in 1938 that Prof. Moltoni, famous ornithologist who became later on the Director of the Natural Sciences Museum of Milan, discovered inside an ornithological collections of specimens collected by Prof. Zavattari in Borana land in Ethiopia, a bird with unknown characteristics and never classified before. It was so that he determined it and dedicated this bird to two of his distinguished colleagues of that time, rightly the genus to Prof. Zavattari and the species to Prof. Stresemann.

It has been much debated on the systematic collocation of this bird that shows characteristics of the Sturnidae as well as of the Corvidae and finally it was decided to classify it in this last family although there would not be a surprise to see it relocated among the starlings or among other new groups. A small outsized crow or a little grown-up starling, it is in any case a particular bird that has attracted strong attention since the first moment of its discovery.

When we talk of endemism in the avifauna, seen the facility of movements the birds have, usually we think of a species living in some island lost in the ocean, in a series of isolated valleys at very high altitude or in particular areas surrounded by deserts or environments that isolate them from any contact or even of apterous forms that little can do for getting out from their seclusion. For the 15 species of birds endemic to Ethiopia these situations appear a real fantasy seen that they might quite well find little far from the place where they live, the same characteristics found in the very small area they have chosen.

This is the case of the bush crow or Ethiopian bushcrow or, if we like so, Stresemann’s bushcrow, as the Anglo-Saxons say. Southern Ethiopia is a highland that slopes, starting from the plateaus of more than 4.000 m of altitude southward with Kenya touching in the lowest point, the Omo valley and the Lake Turkana or westward towards southern Sudan and the great plains of the Nile. Large spaces very similar to each other that might easily host this bird but that, on the contrary, do not reveal any trace of it. It is necessary to rech Yabello and than, suddenly, appears behind the first bush met by the roadside, this nice ash white bird trotting fearless and without any restraint just a few steps away from the observer and then immediately another one and one more. Yes, because as soon as we get in its area it shows up at once in a good number, on the contrary, it can be defined as a common bird where it lives. 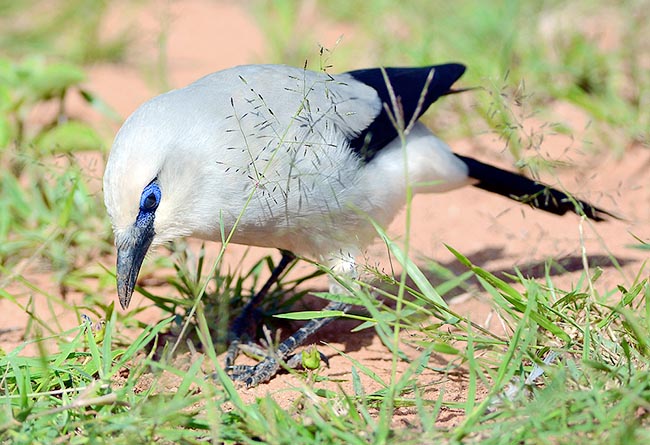 As aforementioned, its scientific bino- men is strictly linked to ornithologists of the time.

Zavattariornis from Zavattari, Italian explorer and zoologist who was the director of the Zoology Institute of Rome University from 1935 to 1958 and from the Greek “ornis” = bird; stresemanni rightly from Erwin Stresemann, also German ornithologist and explorer.

The vulgar European names are rather repetitive in their meaning: in English Stresemann’s bush-crow; in German Akazienhäher; in Spanish Urraquita de Stresemann; in French Corbin de Stresemann and in Japanese an unutterable Sodegurogarasu.

The range occupied by this bird stands among the most reduced between the 15 Ethiopian endemisms and barely covers the 5.000 square km.

Practically and distinctly it occupies an area crossed by the main road to Kenya in the stretch going from Yabello to Mega, about a hundred km, with a neat delimitation in its boundaries. It has not yet been detected the slightest deviation in the paths of this area and not even have been verified cases of findings, even accidental, out from this place. A fairly arid territory formed by soil in reddish laterite, of dried up beds of small water streams, with little dense undergrowths of tall acaias and a thorny underwood rather sparse offering ample empty spaces on the ground. Also small cultivations are present, some meager seasonal pastures, numerous villages of few huts with many ovines grazing and many and very high termite mounds. A quite common situation in the south of Ethiopia but that represents for this bird along with another similar endemic to the same area, the white-tailed swallow (Hirundo megaensis) the only place where to live. Obviously, the Stresemann’s bush-crow is sedentary and does not get away from the native place except for civilizing other territories inside the area even if often, considered the strong sociability, the families seem to form scattered colonies.

The Stresemann’s bush-crow nourishes of insects and of their larvae, foods that it actively seeks on the ground where spends most of its time, rummaging among the fissures and the holes in the soil digging with the strong beak, at the foot of the trunks or under the bushes, on the bark of the trees or under the animals dung.

Curiosity and attention that often lead it to rummage a few meters from your feet without realizing to be in front of a human being. It is a very sociable bird and in the same time social, seen that it lives in small groups sharing with them the search for food, the uproar on the trees and the nidification in colony. It is not at all afraid of the human being and certainly not of the animals passing close but when it sees a raptor it prefers to take shelter immediately or under a bush or between the tangle of branches of the acacia trees, fearing its attack.

It bears with absolute disinterest also the numerous species of starlings, sparrows and Red-bellied parrots (Poicephalus rufiventris) and hornbills that, numerous, share with it the environment where it lives. 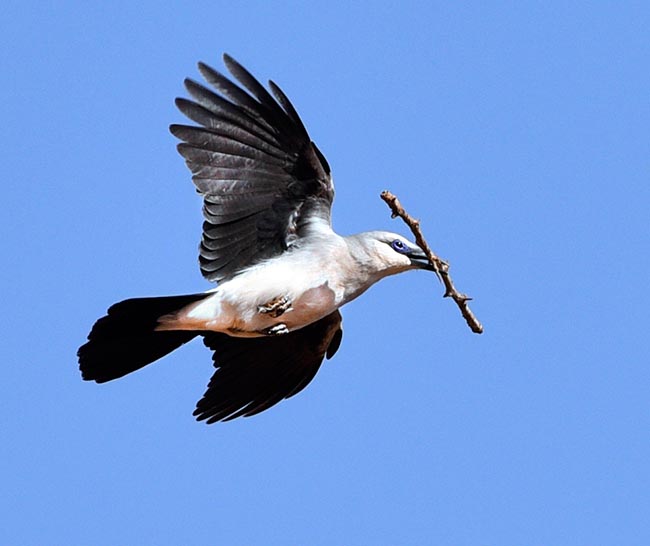 Both spouses care the construction of the nest with thorny twigs spherically twisted on acacias crowns. <br />Stable but endangered species, like all endemisms confined in very reduced areals © Gianfranco Colombo

The Stresemann’s bush-crow lives in its own world as if everything around is not part of its life. It is a talkative bird and often emits guttural and acute verses and in rapid succession to communicate and to signal any displeasure towards undesirable intruders.

The Stresemann’s bush-crow has the size of a small western jackdaw as it hardly reaches the 30 cm of length, a wingspan of about 50 cm and a weight of 150 g.

It has not the flight of a corvid, but is rather similar to that of a starling with quite rounded and compact wings and an always tense and beaten flight. It could broadly resemble that of an Eurasian jay (Garrulus glandarius) without the glides typical of this bird.

At first sight it appears white although being of light bluish ash colour on the back, the wing coverts and on the upper tail whilst it is candid white on the cheeks and on the chest. It has the wings with the remiges, the tail and the paws black remarkably contrasting with the white colour of the body during the flight. It has black beak of reduced and more elegant size if compared to a crow, with eyes surrounded by cobalt blue cere well visible at close range. When on the ground, it walks like a starling but often hops like a turdid. There is no difference between the sexes. The young do not have bright colors like the adults and the white presents traces of a diffused cream nuance; the cere is greyish and does not yet show the characteristic blue of the adults.

Their nests are globular masses of thorny twigs intertwined among the thick branches of the acacias, in the highest point of the crown. At times they can be mistaken with other nests of big sturnids but if carefully observed they can be distinguished due to the bigger size of the twigs used. Seen from below it is not always possible to distinguish the entry hole being this well camouflaged among the branches but the access happens from the lower part of the nest. Both partners contribute to the construction of the nest possibly with a higher prevalence of the male seen the impossibility of getting a sure identification between the sexes. In this species the enlargement of the family unit is common with the presence of one or more not nidifying helpers that assist the couple in the family work. The partners are united for the whole life.

It nidifies during the first months of the year by the beginning of the spring rains, coinciding the birth of the progeny with the humid period in way to take advantage from the increased food availability. It usually lays 6 cream coloured eggs spotted of reddish small dots gathered in a crown in the basal part that are hatched for about 18 days. The chicks come to life completely naked and then cover, initially, with a light greyish down and after one week with the first immature’s feathers. They stay in the nest for about three weeks and then fly off but remain linked to the parents for at least another month after. During this period they continuously follow the parents from whom they are regularly nourished. The independence takes place a little later but the young appear to remain linked to the native place and to the familiar group for long time.

It is not exactly known how long they can live, but it is thought that having a reduced number of natural foes, absence of predation or anger from the humans and the scarcity in the use of pesticides in the local agriculture, they may survive for at least a decade. Although being a bird not presenting particular dangers, it has been considered as an endangered species like all the endemic species confined in a very reduced territory. After the last studies done, it seems however that the population is stable.