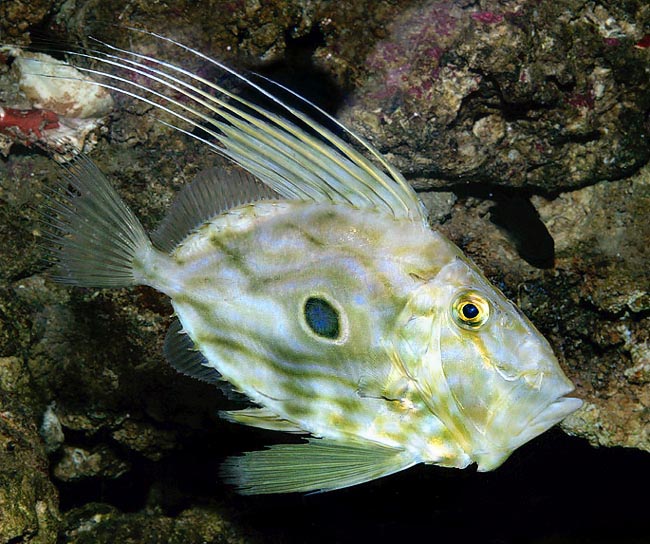 The St. Pierre or John dory (Zeus faber Linnaeus, 1758) belongs to the class of Actinopterygii, the ray-finned fishes, to the order of Zeiformes, and to the family of Zeidae.

The name of the genus recalls Zeus, the father of the Gods for the ancient Greeks, and, as per Pliny, it was also the name the Romans did give to this fish.

The name of the species, “faber” = smith, originates from the fact that the shape of the fins should evoke the tools of this profession.

The epithet St. Pierre refers, on the contrary, to the legend after which the black spot appearing on the sides should be the imprint of the thumb and the index of St. Peter. At Capernaum (Matthew 17.24-27), they had in fact asked Jesus two drachmae for entering the temple. Jesus was not in agreement but, in order not to shock the people, He told Peter to throw a fishhook into the sea, because in the first fish caught he should have found a gold coin for paying the fee. It is therefore, an important fish, which has always fascinated the human fantasy.

Its distribution is quite ample. Besides Mediterranean, Black Sea included, it has colonized all the eastern Atlantic coasts, islands included, from South Africa to Scandinavia, all those of the Indian Ocean, including Australia, and those of the western Pacific. Practically, nowadays, it is absent only in the American continent. 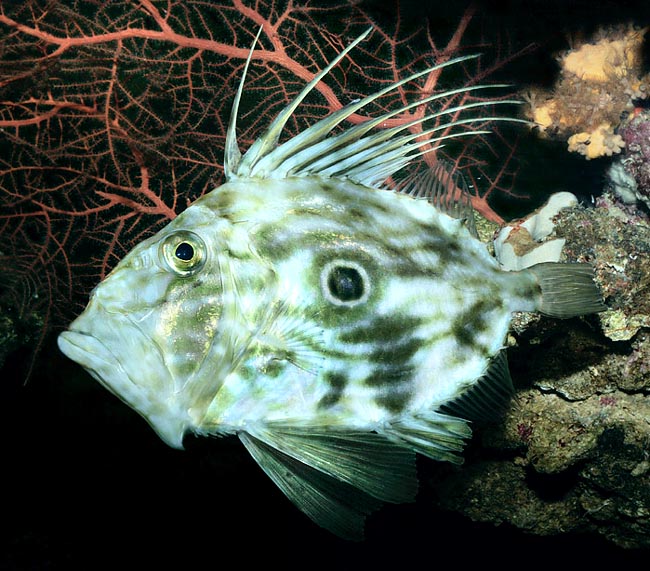 Specially in young, the membrane between dorsal rays extends with a showy look well beyond the spines © Mazza

It can reach the length of 90 cm and the 8 kg of weight, even if it seldom exceeds the 40 cm. The body is oval, compressed on the sides, with scales so small to be almost invisible.

The head, big and monstrous with various spinosities, has a protractile oblique mouth. The lower jaw is longer, with a robust spine at the base on both sides. Both carry from 3 to 5 series of conical teeth, higher on the vomer.

The first 9-11 rays of the dorsal fin are long and spiny, and, particularly in the juveniles, the membrane separating them extends in a pyrotechnic way well beyond the tip. At their base we see still more spines on both sides, and then, finally, we get 21-25 soft rays.

Also the two ventral ones do have a spine, followed by 6 soft rays, but here what is astonishing is their length.

On the other hand, the pectoral fins are tiny and the tail, spatulate, is more or less convex. Having such a spectacular and fanciful whole of fins, the St. Pierre fish is by sure not hydrodynamic, and in fact it swims quite badly, slowly, often askew or flaky, with successive shots.

On the whole colour, violaceous or greenish grey with silvery hues, we note some dark or yellowish striations, but the focal point drawing the attention stands in the dark spot, bordered with clear, placed in the centre of the sides.

Very greedy, the St. Pierre plays the mimetic card and the curiosity it arises with its shapes, for swallowing the passing-by fishes.

Or, it slowly approaches the schools, almost hidden, opposite, in order to appear smaller.

In both cases, as soon as the prey is close, it protrudes the big protractile mouth and swallows the prey in a second, even before the prey realizes it.

Everything can be found in its stomach: pilchards, herrings, but also cuttlefish, squids and crustaceans. In the stomach of a 32 cm specimen caught along the Italian coasts there were even 25 young European flounders (Platichthys flesus) even seven cm long! The Zeus faber reproduces, in the Mediterranean, between November and May. The pelagic eggs float, but later, during the incubation, which lasts almost two weeks, they get heavier and open in deeper waters.

The larval forms are part of the plankton, and as soon as the young are strong enough to resist the currents they become benthic. They will reach the sexual maturity by around the fourth year of life, when 23-29 cm for the males and 29-37 cm for the females. Seen its enormous diffusion, it is not an endangered species, but seen that its prized flesh is much asked for, their fishing should be limited by fixing the minimum width of the mesh size of the nets to 37 cm, in order to allow to every specimen to reproduce at least once.

The reproductive cycle of the John dory is, in fact, long: for doubling the population are needed, depending on the zone, from 4,5 to 14 years. The vulnerability index of this species is of 68 over 100.