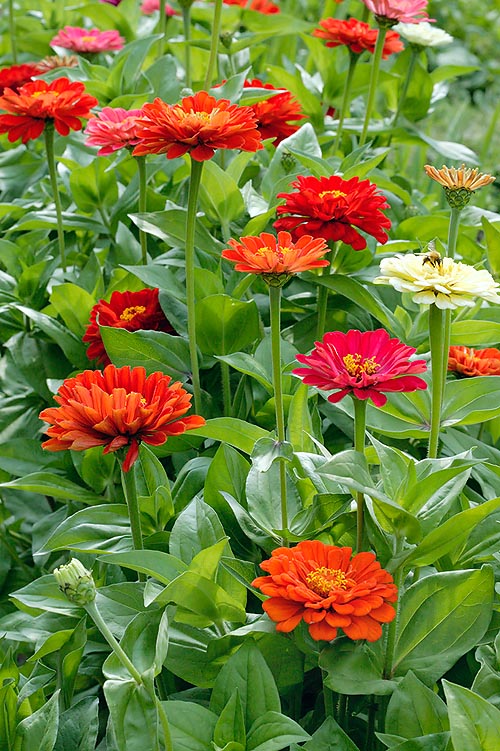 Depending on variety, the Zinnia elegans may measure 15 to 120 cm © Giuseppe Mazza

This plant is native to Mexico (states of Colima, Durango, Guerrero, Jalisco, Mexico, Michoacán, Morelos, Nayarit and Sinaloa), where it grows in the deciduous or sparse forests, grasslands and fallow lands between the 600 and the 1.800 m of altitude.

The genus was honoured to the German anatomist and botanist Johann Gottfried Zinn (1727-1759).

The name of the species is the Latin adjective “elegans” = distinct, elegant, with obvious reference.

The Zinnia elegans Jacq. (1792) is a much variable annual herbaceous plant, erect, ramified, 0,15-1,2 m tall, with wrinkled stems due to a rigid down; it has opposite, sessile leaves, amplexicaul (which, at the base, is clasping the stem), ovate to lanceolate and of rather pale green colour, 2-10 cm long and 1-2 cm broad, rough to the touch.

The terminal inflorescences, of 4-7 cm of diameter, solitary, on an 8-10 cm long peduncle, are the typical flower heads of the Asteraceae, formed by a host of sessile flowers spirally inserted on a conical or cylindrical base, the receptacle, surrounded by an involucre formed by several series of obovate imbricate bracts, the outer ones being 2-4 mm long, and the inner ones up to 10 mm.

The 8 to 13 (many more in the cultivated forms) flowers of the outer ring, called ray florets, have the corolla from obovate to oblanceolate, 1,5-3 cm long, formed by five petals united together, mainly of purple violet colour. The ray florets are female and have the function of attracting the attention of the pollinator, like the petals of a single flower.

Inside the ring are the bisexual flowers, called disc florets, about 8 mm long, with yellow tubular corolla, with five dark purple edged lobes.

The fruits, containing one seed only and called achenes (or, more correctly, cypselae), in the Asteraceae, are compressed. The fruits of the ray florets are about 8 mm long and 3,5 mm broad, covered by small rigid bristles. 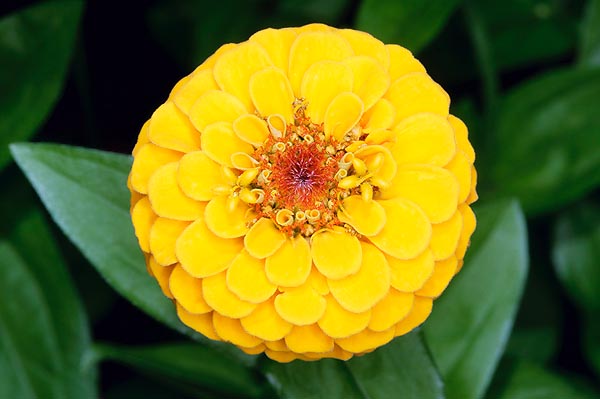 Almost all colours, but blue, for a blooming lasting till autumn © Giuseppe Mazza

Those of the disc florets are about 5 mm long and are ciliate.

It very easily reproduces by seed, in winter in sheltered location, where it germinates in one week at the temperature of 22 °C, or directly in the ground in spring.

The first flowering takes place about two months after the seeding.

Introduced in Europe by the end of ‘700 (1796), it has raised immediately the interest and already during the very first years of its diffusion.

The great intrinsic variability in the shape and in the colour of the flowers was immediately remarked. As a matter of fact, quite soon did appear spontaneously plants with colour differing from the purple violet and of which was immediately given notice and diffusion, as was the case for the first with scarlet red flower and of that with white flower.

But the true turning point took place at the appearance, during the second half of the ’800, of the first variety with double flower. 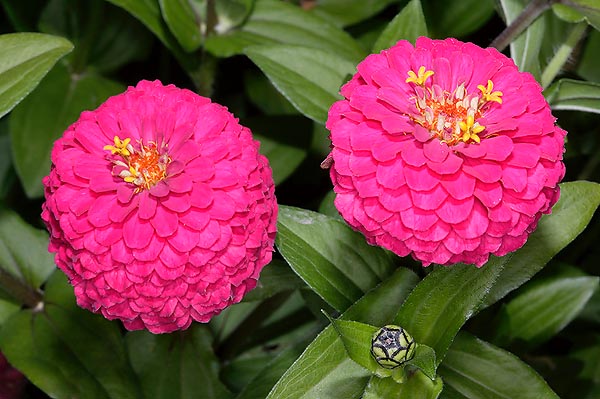 In the cultivated forms the ray florets, originally 8-12, have become much numerous © Giuseppe Mazza

Since that moment, there was a stroke to the selection and to the crossings to create varieties with semi-double and double flowers, which, in very few years, have replaced the botanical forms with simple flower, and with the most varied colours.

The Zinnia elegans became in this way and in short time, one of the garden plants most ever cultivated.

Its great popularity comes not only for the long period of its flowering, from late spring to late fall, and for the intense and bright colours, going from the white to yellow, to pink, red, dark purple, but the blue (there is also a green variety called ‘Envy), but also for the facility of its cultivation.

Growth velocity and, mainly, the easiness with which a seed is obtained.

Besides the countless shades of colours, the varieties distinguish for the posture, shape and dimension of the flower head. We go from the 4 cm of diameter of the dwarf cultivars to the 15 cm of the giant ones. 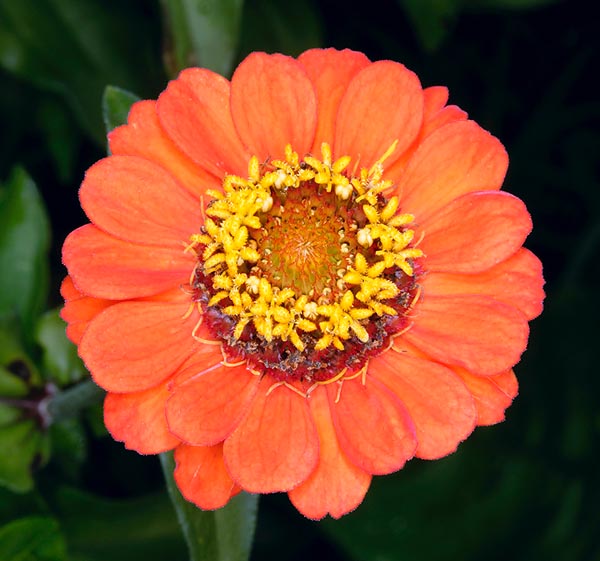 The disc florets, yellow, are 5-lobed and about 5 mm long © Giuseppe Mazza

Whilst, concerning the shape, we have simple, semi-double, double, “dahlia”, “cactus” like flowers, or with the petals (the ray florets) thin and twisted, and “pompon”.

It needs full sun, and is not particularly demanding about the soil, provided the same is perfectly draining, being easily subject to radical rottenness in presence of stagnating humidity, even if it prefers rather sandy and rich of organic substance soils.

In particularly humid climates, it may be attacked by fungal diseases, in first place the powdery mildew (Erysiphe cichoracearum).

It is important therefore, when effecting the installation, to avoid situations of stagnating wetness, spacing the plants properly, at least 30-60 cm depending on the posture (dwarf or giant).

To avoid this, during the last years they have selected varieties resistant to the white mildew, in particular, the new hybrids of Zinnia elegans and Zinnia angustifolia, with a compact posture, have shown a high resistance to humidity and diseases.

The parasites which may more easily attack it are the aphids and the cottony scale.

Thanks to the great variability of posture, it may find the proper collocation in whatever contest, from the low edges to the bottom ones, from the flower beds to the rocky gardens. 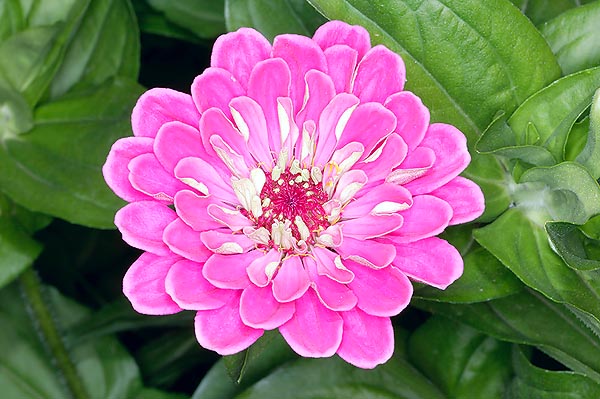 The flower head may vary from 4 to 15 cm, with the most varied forms © Giuseppe Mazza

In order to get a richer and more prolonged flowering, it is useful to eliminate the withered flowers. Watering must be regular, but spaced, in order to allow the superficial layer to dry up and once well rooted, it may bear dry periods.
It is good to pay attention not to wet the leaves when watering, thus to avoid the forming of anti-aesthetic dark dots.

It is also an excellent pot plant for decorating balconies, terraces and patios, and for this purpose are particularly indicated the dwarf and compact varieties.

It is widely utilized also as cut flower; for a long lasting, 5-7 days, the flowers are to be picked up when completely open and by early morning, taking off the lower leaves and placing them immediately in water. When properly dried up, the flowers maintain well the colours, but the red and the purple, and therefore they are often utilized in the dry flowers compositions.

Zinnia elegans was last modified: May 6th, 2018 by Giuseppe Mazza