Old Havana, jewel of Cuba. It is an ensemble unique in the world, the largest Spanish colonial centre declared a “ World heritage site ” by UNESCO. 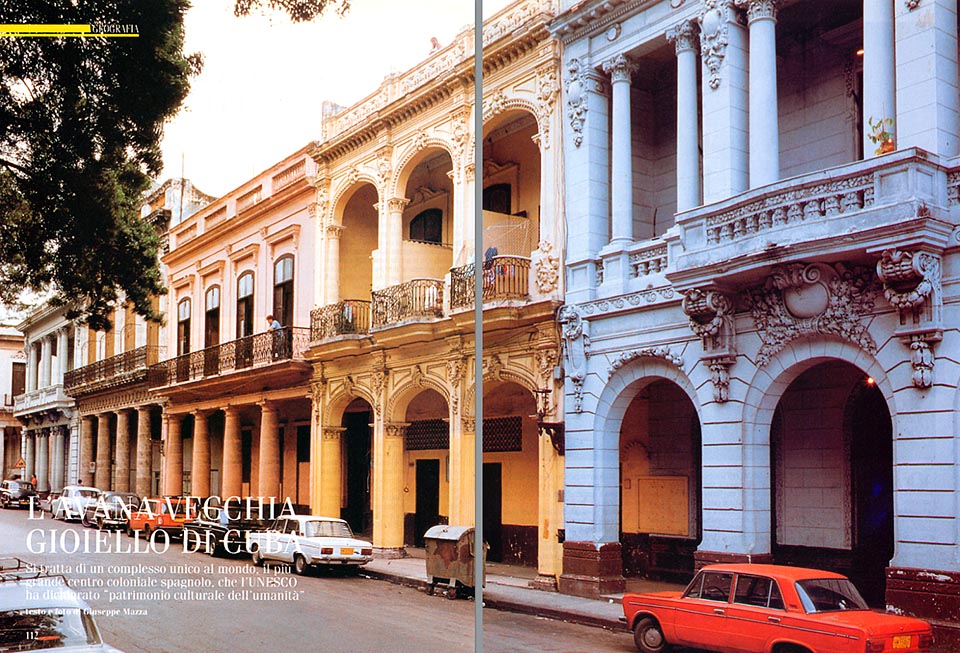 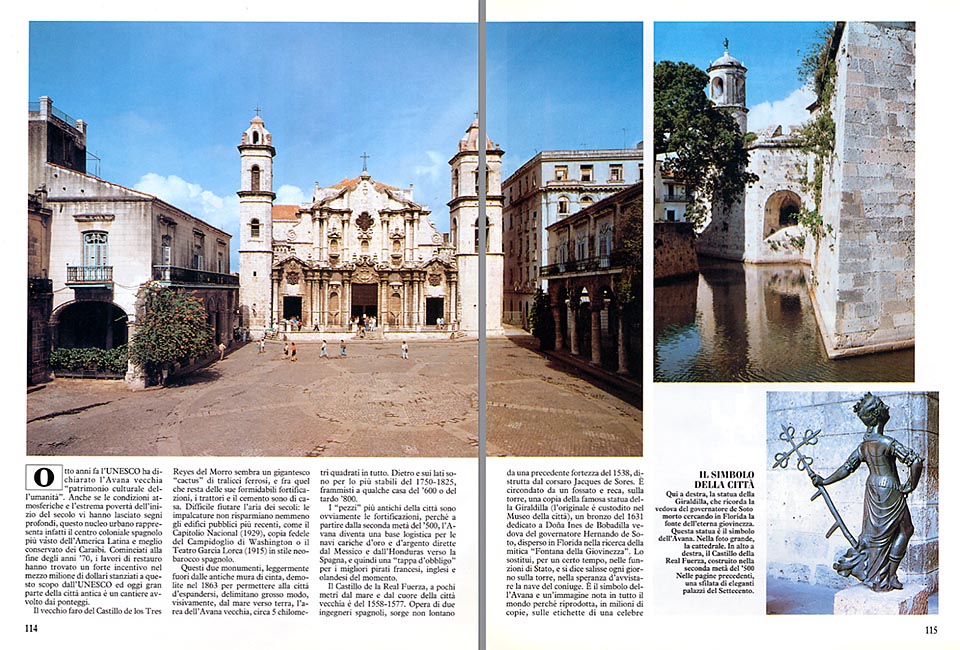 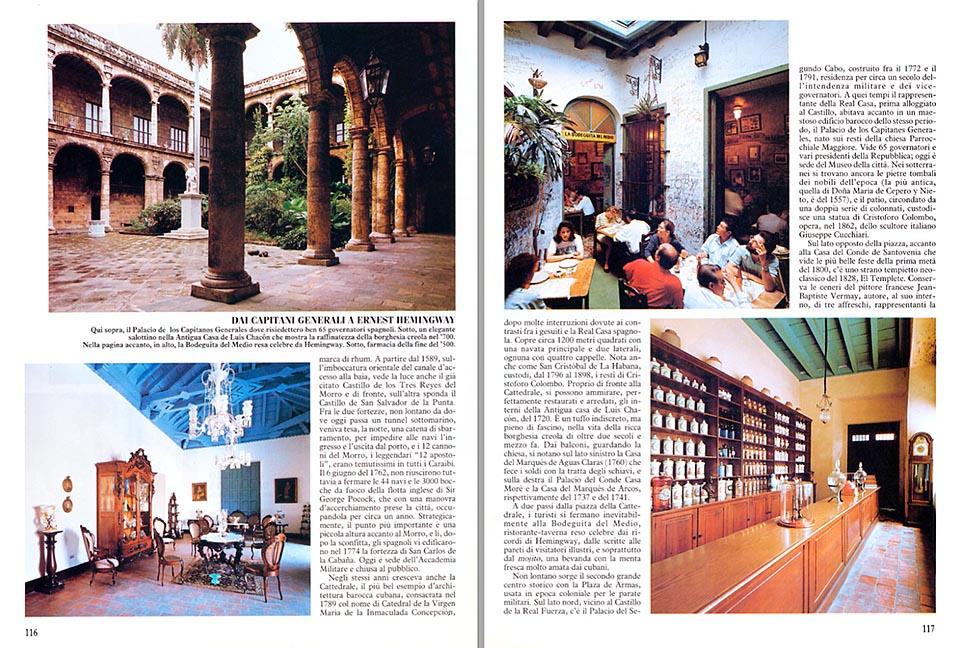 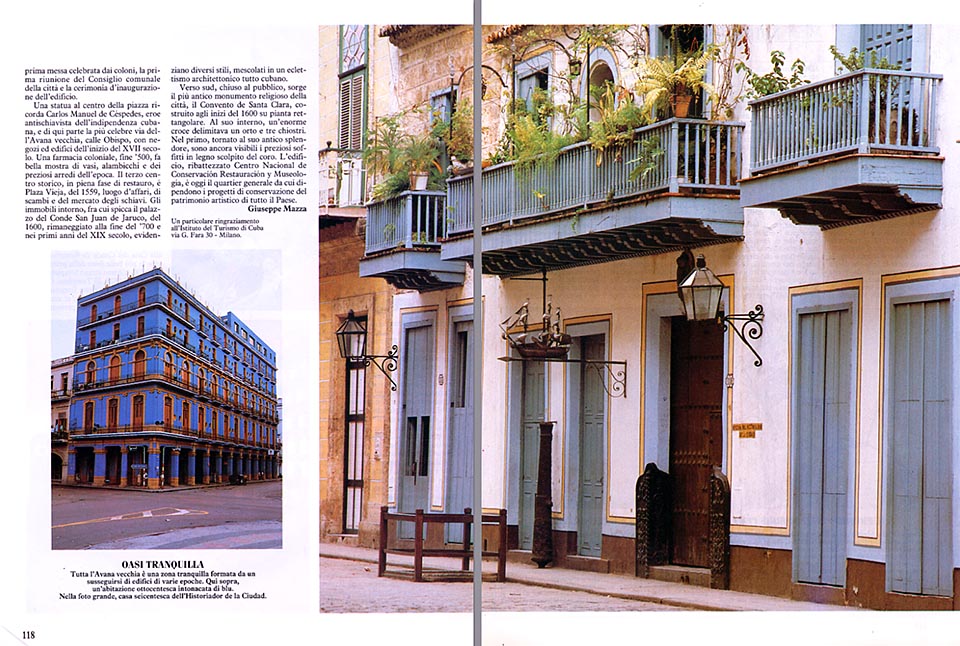 The UNESCO has declared the old Havana “World Heritage Site”.

Even if the atmospheric conditions, and the extreme poverty of the beginning of the century have left there profound traces, this urban nucleus represents, in fact, the widest Spanish colonial centre of Latin America and the best kept of the Caribbean.

Started by the end of the seventies, restoration works have found a strong incentive in the half million dollars allocated by UNESCO for this purpose, and today a huge part of the old city is a working site, surrounded by scaffoldings.

The old lighthouse of the Castillo de los Tres Reyes del Morro, looks like a colossal cactus of ferrous latticeworks, and between what remains of its powerful fortifications, tractors and cement are of the family. Difficult to feel the atmosphere of the centuries: the scaffoldings do not spare even the more recent buildings, such as the Capitolio Nacional (1929), exact copy of the Capitol of Washington, or the Teatro Garcia Lorca (1915), built in Spanish neo-baroque style.

These two monuments, slightly outside from the ancient town walls, demolished in 1863 to create room for the city expansion, fix the boundaries, more or less, visually, from the seaside, towards the land, the surface of the old Havana, about 5 square Km., at all.

Behind and on the sides, there are mainly buildings of 1750 – 1825, mingled with some houses of 1600, or the late 1800. Houses in a heavy status of degradation, and those living there, try to “restore” them as they can, with some help from the government.

The most old “pieces” of the city, are, obviously, the fortifications, because, starting from the second half of 1500, Havana became a logistic base for the vessels loaded of gold and silver, bound from Mexico and Honduras to Spain, and therefore, a “compulsory stoppage” for the best French, English and Dutch pirates of the time.

The Castillo de la Real Fuerza, a few metres far from the sea and the heart of the old city, dates of 1558 – 1577. Realised by two Spanish civil engineers, raises not far away from a previous fortress of 1538, destroyed by the corsair Jacques de Sores. It is surrounded by a ditch and has, on the tower, a copy of the famous statue of the Giraldilla (the original is kept in the City Museum), a bronze of 1631, dedicated to Dona Ines de Bobadilla, widow of the governor, Hernando de Soto, missed in Florida, while looking for the legendary “Source of the Youth”.

She replaced him, for some time, in the governing functions, and they say that she went, every day, on top of the tower, hoping to sight the vessel of her husband. She is the symbol of Havana, and a figure known all over the world, because reproduced, in millions of copies, on the labels of a famous brand of rum.

Starting from 1589, on the eastern entrance of the channel leading to the bay, came to birth also the previously cited Castillo de los Tres Reyes del Morro, and in front, on the other bank, the Castillo de San Salvador de la Punta.

Between the two fortresses, not far from where now passes an under water tunnel, a barrage chain was installed, for hindering the vessels to enter and get out of the harbour, and the 12 cannons of the Morro, the legendary “12 Apostles”, feared all over the Caribbean. On the 6th of June 1762, however, they did not succeed in stopping the 44 vessels and the 3.000 firearms of the English fleet of Sir George Pocock, who, with an encircling manoeuvre, took possession of the city, occupying the same for about one year.

Strategically, the most important point, is the little height close to the Morro, and there, after the defeat, the Spaniards built, in 1774, the fortress of San Carlo de la Cabana. Nowadays, it’s the seat of the Military Academy and is closed to the public.

In the same years, also the Cathedral grew up, the most beautiful specimen of the Cuban baroque architecture, consecrated in 1789, with the name of Catedral de la Virgen Maria de la Immaculada Concepcion, after many stoppages, due to contrasts between the Jesuits and the Spanish Real Casa. It covers about 1.200 square metres, with one main nave and two aisles, each one with four chapels. Known also as San Cristobal de la Habana, it kept, from 1796 to 1898, the remains of Christopher Columbus.

Just in front of the Cathedral, we can admire, perfectly restored and furnished, the interior of the Antigua casa de Luis Chacon, of 1720. It’s an indiscreet, but fascinating, dive in the life of the rich Creole bourgeoisie of more than two and a half centuries ago. From the balconies, looking towards the church, we notice, on the left side, the Casa del Maqués de Aguas Claras, (1760), who enriched with the slave-trade, and, on the right, the Palacio del Conde Casa Moré, and the Casa del Marqués de Arcos, of 1737 and 1741, respectively.

Close to the square of the Cathedral, tourists stop, inevitably, at the Bodeguïta del Medio, restaurant-inn rendered famous by the memories of Hemingway, with the inscriptions, on the walls, of illustrious guests, and, mainly, by the mojito, a drink with fresh mint very much loved by Cubans.

Not far away, there is the second large historical centre: the Plaza de Armas, used during the colonial times for military parades. On the northern side, close to the Castillo de la Real Fuerza, there is the Palacio del Segundo Cabo, built between 1772 and 1791, residence for about one century, of the military Intendance, and of the vice-governors.

In those times, the representative of the Real Casa, previously lodged at the Castillo, lived close to a majestic baroque building of the same period, the Palacio de los Capitanes Generales, erected on the remains of the Major Parochial church. It gave hospitality to 65 governors and several presidents of the republic; now it’s the seat of the Museum of the city. In the underground, there are still the grave stones of the persons of rank of that time (the oldest one, that of Dona Maria de Cepero y Nieto, is dated 1557), and the patio, surrounded by a double range of colonnades, keeps a statue representing Christopher Columbus, made in 1862, by the Italian sculptor Giuseppe Cucchiari.

On the opposite side of the square, close to the Casa del Conde de Santovenia, where took place the most beautiful feasts of the first half of 1800, there is an odd neo-classic temple of 1828, El Templete. It keeps the remains of the French painter Jean-Baptiste Vermay, author, inside, of three frescoes, representing the First Mass celebrated by the settlers, the First meeting of the City Council, and the Ceremony of the inauguration of the building.

A statue in the centre of the square, celebrates Carlos Manuel de Céspedes, antislavery hero of the Cuban independence, and from here begins the most famous road of old Havana, Calle Obispo, with shops and buildings of the beginning of the 17th century.

The third historical centre, under restoration, is Plaza Vieja, of 1559, place of affairs, exchanges and market of slaves. The buildings around, between which is conspicuous the palace of the Conde San Juan de Jaruco, of 1600, altered by the end of 1700, and during the first years of the 19th century, emphasize different styles, mixed in an architectural eclecticism, typical of Cuba.

Towards south, closed to public, stands the most ancient religious monument of the city, the Convento de Santa Clara, built at the beginning of 1600 on a rectangular plant. Inside, an enormous cross was delimiting an orchard and three cloisters. In the first one, now back to its old magnificence, are still visible the precious ceilings in carved wood of the choir, in the upper part of the church, which looks now, without altar, like a spacious, naked hall.

In the dormitories of the nuns, with UNESCO money, have been instaleld the most modern apparatuses of restoration, and the building, renamed Centro Nacional de Conservacion, Restauracion y Museologia, is now the head quarter from which depend all the projects of conservation of the artistic patrimony of all the Nation.