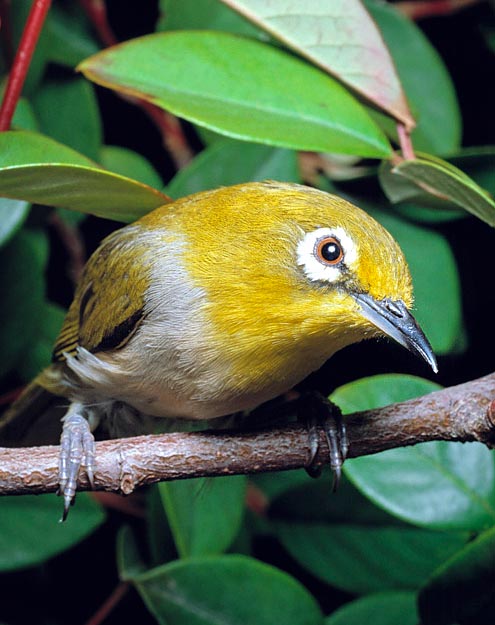 At home in Japan, Zosterops japonicus has become a pest in the Hawaii © Mazza

The Japanese White-eye (Zosterops japonicus Temmink e Schlegel 1847) is a little small bird belonging, along with other species of the same genus, to the so-called group of the “white-eye” family. It is part of the great order of the Passeriforms (Passeriformes), the family Zosteropidae, the genus Zosterops and the species Zosterops japonicus. There are eight subspecies and some geographic variants.

The name of the genus “zosterops” comes from “zoster” = belt, edge and “op-” = to see, due to the characteristic small eye-ring of white feathers surrounding the eyes.

The term “japonicus” = of Japan, in Latin, refers to the place of origin of the species.

This species is found naturally, as the name mentions, in Japan where it is common, diffused and known; but is present also in Taiwan, in eastern China and in the northern Philippines. Part of the population does migrations taking it to spend the winters in Burma, on the Hainan Island (southern extremity of China) and in Vietnam. It has been introduced on the island of Oahu (in 1929) from where has spread in all the Hawaii islands becoming the most common species of terrestrial bird of the archipelago!

Its impact on the autochthonous avian populations has been negative because it has carried new avian parasites and because it has become an alimentary competitor for some species which occupy similar ecologic niches so much that they have created programmes aiming the eradication of this species from some habitats important for the conservation of endemic species.

It seems that this species holds an active role in the pollination of the flowers of some plants and also as disseminator of various seeds. It moves hopping among the foliage while looking for preys and food of other kind; it rarely descends to the soil. This small bird frequents any sort of woody or bushy habitat from the sea level up to about 3000 metres of altitude; is present also in parks and gardens. It is a confident species accepting willingly to nourish in artificial mangers provided by men. In spite of its sweet look, it is a rather aggressive and rustic species which has met no difficulty in colonizing new habitats. 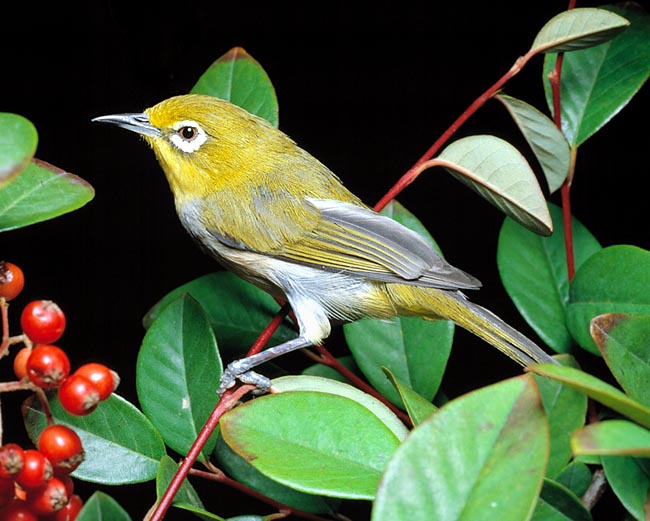 In Japan it is a very popular small bird as companion animal (kept in cages for its melodious song) as well as being much represented by the Japanese artists. To the group of the so-called “white-eye” birds belong more than 80 species, not all as common as the Zosterops japonicus; in fact, about twenty of these species are considered as threatened of extinction and a couple are already considered as extinct.

The Japanese white-eye is a small bird weighing about 9-13 g and 10-12 cm long. The upper parts of the body are olive-green from the head to the neck and the sides. Also the wings and the tail are greenish. The green colour turns more yellowish in the lower parts of the body such as the under-throat and the rump.

The abdomen, from the under-throat to the tail, is pale grey-whitish; this colour “penetrates” also slightly laterally at the level of the dorsal margin of the closed wing. The primaries of the wings and the rectrices are shaded in brown-greyish and are darker than the rest of the livery. The typical periocular ring of white feathers surrounds almost entirely the eye as it has only a very small interruption in the median commissure of the same. The eye has brown iris. The wings are rounded; the tail has a rather squared shape. The legs are robust and are grey. The beak, thin but strong and pointed, is blackish grey with the base of the lower rhamphotheca grey. The sexes are similar.

The conformation of this small bird renders it suitable for performing acrobatics and hops and for often hanging upside down especially when looking for insects and spiders which it is capable to find even from the most hidden locations and holes. 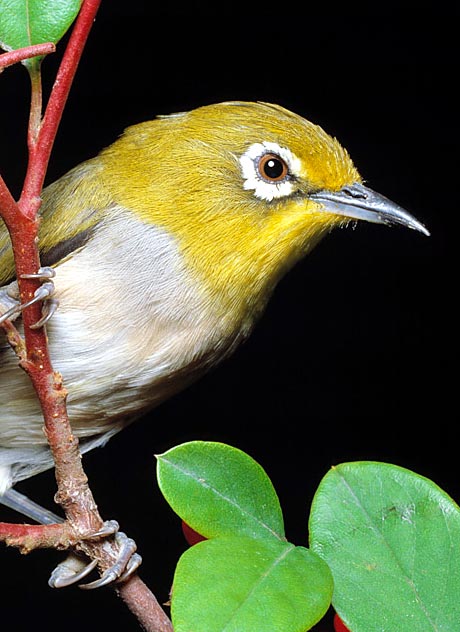 Cute, acrobatic, melodious and nice, but aggressive too © Giuseppe Mazza

Excepting the breeding time, this species has a marked tendency to live in groups which may include even hundreds of specimens of the two sexes. It decidedly has arboricolous habits and manly nourishes of insects but also of some fruits and berries. The diet includes also the nectar of the flowers which it can smartly get thanks to the anatomic conformation, like a “brush”, of the tongue.

The flocks of Japanese white-eyes may merge also with birds of other species while looking for food. Inside the flock hierarchic relations take shape; the care of the plumage is very keen and often the specimens of the same flock clean and groom their feathers each other.

During the breeding season the groups divide in pairs and the males occupy and defend their own territory mainly with the song.

However, even the conspecifics are sent away actively. The nest is built at variable heights from the soil and has the shape of a classical small cup of 5-6 cm of diameter and 4-5 cm of length. The nest has usually a fine texture as it is realized with thin vegetal filaments, lichens, mosses, rootlets, cobwebs, hairs; it is usually fixed to the fork of a branch. The breed is usually formed by 3-4 white eggs, smooth and elliptic. The hatching lasts 11-12 days.

The newborns have the eye closed and the same will open when about 5 days old, the beak is initially yellow. At birth they are featherless even if the feathering is fast. During the first days of life the newborns are nourished only of insects and by the 5-6 days of age the diet will be integrated also with aliments of vegetal origin. The growth is very fast and the pullets will leave the nest already when 10-12 days old even if they are not yet able to fly well.

The juveniles, at the time of the fledging do not have the typical “white-eyes” which will however appear within a short time (within the month of age). When 20-25 days old, the young will be independent and when about one month old they will be sent away by the parents who will begin the preparations for a successive hatching; the pair in one single season in fact can perform even five broods. The juveniles tend to merge in flocks until they reach the adult age, usually gotten by the reproductive season following their birth.

Zosterops japonicus was last modified: May 1st, 2020 by Giuseppe Mazza