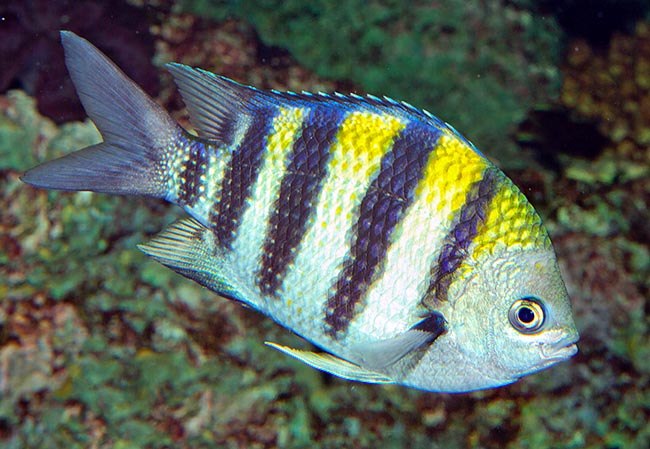 The Sergeant-major fish, also known as Five-banded damsel fish (Abudefduf vaigiensis Quoy & Gaimard, 1825), belongs to the class of the Actinopterygii, the ray-finned fishes, to the order of Perciformes and to the big family of Pomacentridae with about a thirty genera and 400 species.

The name of the genus Abudefduf comes from the Arabic “abu” = father and from the reinforcement “duf”, it would be therefore a “super father”… the most important fish in the reef.

According to some authors, nevertheless, Abudefduf would come from the Arabic “abu”, that in this case would mean “the one with”; “def” = flank; and “duf”, that would still be acting as a reinforcement; meaning, in a whole, that it is “the one with the prominent flanks”, referring to the striking striped pattern that exhibit some species in this genus.

The name of the species vaigiensis reminds us Waigeo Island, the greatest island of the archipelago of Raja Ampat, in Indonesia, where this fish is at home.

The sergeant-major fish has a vast distribution in the tropical waters of the Indian and Pacific oceans. Indicatively, we find it from South Africa and Madagascar up to the Red Sea, the islands of the Seychelles, Mauritius, Réunion and Maldives, in India, Sri Lanka, Australia, Indonesia, Micronesia, New Guinea, Palau, Philippines, Taiwan and China, up to the islands of Ogasawara and Ryukyu in the southern part of Japan. Eastward, it has colonized Fiji, Samoa, Tonga, Kiribati and Tuamotu. Southward, in the Pacific, after the Great Barrier Reef it reaches New Caledonia and New Zealand.

Since several years, thanks to the Suez Canal, it has entered the Mediterranean occupying the ecological niches left free by the autochthonous species little inclined to the high temperatures and the low salinity linked to the strong flow of the Nile, nowadays reduced due to the Aswan Dam. This is a classical case of “Lessepsian migration”, so called because in memory of Ferdinand de Lesseps, designer of the Canal. This phenomenon, which interests an increasing number of species, is today favoured also by the dissolution of the Bitter Lakes, two zones with very high salinity, crossed by the Canal, and by the increase of temperature of the Mediterranean waters linked to the greenhouse effect. In this way, the unstoppable Abudefduf vaigiensis has reached Naples and recently has even been fished in the Gulf of Genoa.

The sergeant-major fish loves the lagoons and the reefs, but also the rocky coasts and the harbours. It usually keeps mid-water without gong down more than 14-15 m of depth. 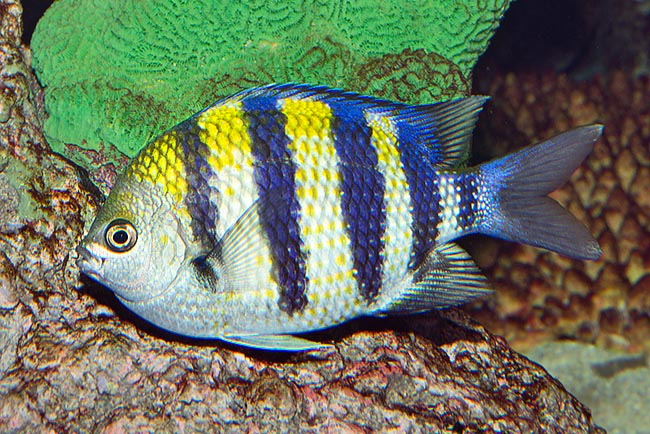 The males, polygamous, are “good dads” and watch the eggs till the hatching © Giuseppe Mazza

It can exceptionally reach the length of 20 cm, but rarely exceeds the 15. The high and flat body, with oval profile, shows a small mouth with about fifty incisor-shaped teeth per jaw.

When young, this fish nourishes mainly of plankton, but then hunts crustaceans, gasteropods, ascidians, annelids, jelly fishes and small fishes, cleaning, as a dessert, the madrepores from poisonous infesting algae. And, therefore, even if seen the modest size is eaten rarely, the consumption of its flesh may cause a serious alimentary intoxication called ciguatera.

The males are polygamous and territorial. The reproduction takes usually place during the days of high tide, for a better dispersion of the larvae. After having cleaned carefully a flat support, like the base of a coral, a stone or a shell, in order to prevent fungal infections, every respectful may invites the females of its zone to spawn by dancing over the nest. Then, in accordance with its appellative of “super father”, it keeps the watch to the eggs till the hatching, ventilating them with the fins.

The young often grow at the shelter of floating objects, which, besides protecting them against the marine bird’s attacks, are usually a nursery of eatable seaweeds and small crustaceans. The resilience is good: the populations decimated by the events can in fact double in less than 15 months. Kept in mind the ample diffusion of the species, not to forget the adaptability to various habitats and to different diets, the vulnerability index is logically low: only 16 on a scale of 100.