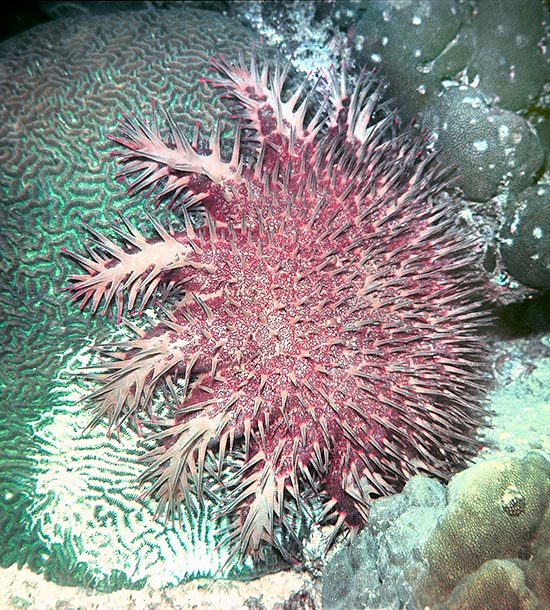 The “Crown-of-thorns” starfish Acanthaster planci (Linnaeus, 1758) owes its name to the evident presence of venomous spines covering its skin. In Latin, in fact, “acanth-aster” rightly means “thorny star”. Planci has, conversely, the same Greek root of “Plankton”, that is vagrant, and this is probably referring to its slow way of moving. Being, therefore, a starfish, it belongs to the phylum of the Echinodermata, class Asteroidea, that is the class enclosing all marine starfishes. The order is that of the Spinulosida, family Acanthasteridae.

It is amply diffused in the coral reefs of the Indo-Pacific region (Hawaii, Australia, South Africa, Red Sea and India).

Sedentary and solitary denizen, found almost exclusively in association with the coral reef, of which it is a greedy predator, its adult specimens can be sighted also on the open spaces of the sandy bottoms. The young specimens, conversely, try to hide among the crevices of the reef. Locally, and in short time, the A. planci population may achieve very high levels of density, becoming a proper and real pest for the coral reef, destroying ample portions of the same. Usually, A. planci nourishes of corals during the night, and they have estimated that one single individual may destroy even 8 square km of reef in one year. In many zones, local movements have originated veritable underwater crusade, of doubtful value, to which often also the vacationers take part, and every year thousands of individuals are fished and buried in the shore in the attempt of decreasing its density and preserving the reef. Nevertheless, currently there is a new biocontrol method that has been proven more effective based on the injection of a substance derived from ox bile which induces an allergic response on the animal and, eventually, death.

A. planci can reach and exceed the 40 cm of diameter. Of typical radial
symmetry like all echinoderms, it presents 10 to 30 rays (usually more than twenty) that surround a very ample central disc. The whole surface is amply covered by venomous, very high, 40-50 mm, and thick spines that in the man cause a diffused and painful swelling with slow course, and at times nausea in the cases of most serious intoxication. In the adult the colouration can much vary, from red to green, with the spines presenting the reddish tip to show the dangerousness of the poison they carry. 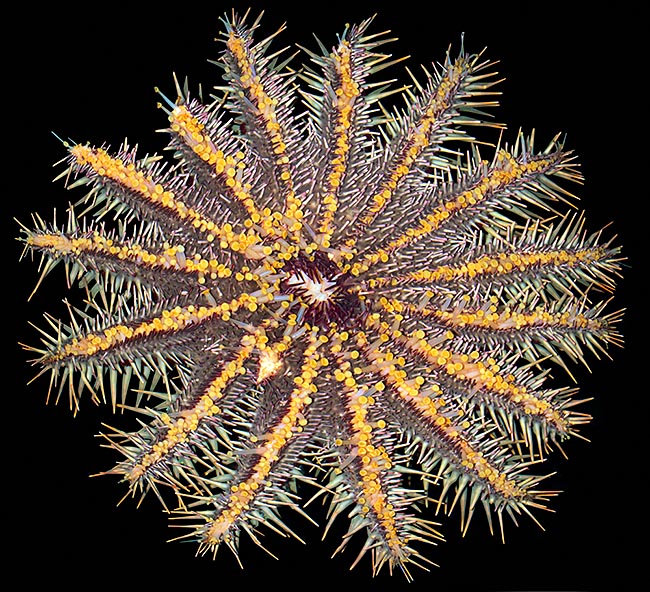 Bottom view of Acanthaster planci, with its mouth and its innumerable arms © Giuseppe Mazza

The colour depends mainly on the dermal branchiae (papulae), on their extent and their diet, and consequently it may vary in the time. The juveniles have more cryptic colours for camouflaging with the barrier. Each arm presents two rows of ambulacral pedicels thanks to which this starfish can climb the most insidious surfaces of the coral reef. A variable number of small warts, called madreporites, are arranged on the aboral surface of the oral disc. Their relative position varied depending on each individual. They can even have up to six anuses.

A. planci is a species with separate sexes reproducing only in sexual way. The fertilization is external, as often happens among the invertebrates. Females and males disperse their genetic material in the water medium. One single female can spawn even some tens of millions of eggs. The reproductive period takes place between December and January, when the water temperature of the Pacific regions exceeds the 28 °C, but in some zones the period is probably longer, or even the eggs can be released and fertilized during the whole year. In any case, the reproduction period is strongly connected with the water temperature; it can, therefore, greatly vary on regional basis or from year to year. The single event of the release of the gametes lasts about 30 minutes in the male as well as in the female. Along with the gametes is released also a substance inducing to the release of the gametes also in the nearby individuals. This clearly happens to ensure that males and females synchronize their release of eggs and sperms increasing the probability of meeting of the sexual cells. Once the fertilization has occurred, the embryo develops in a planktonic herbivorous larva. The planktonic life window lasts about one month, after which the larva, passing through a series of intermediate stages of development, metamorpizes in a juvenile phase with five rays. Initially the lithe starfish does not abandon immediately the herbivorous diet, probably feeding of encrusting algae. After about six months of slow growth, the last metamorphosis as adult modifies also its behaviour: the animal becomes carnivorous and begins nourishing of polyps. The adult reaches its sexual maturity after two years.

→ To appreciate the biodiversity within the ECHINODERMS please click here.