The Achilles tang (Acanthurus achilles Shaw, 1803) belongs to the class of the Actinopterygii, the ray-finned fishes, to the order of the Perciforms (Perciformes) and to the well known and large tropical family of the Acanthuridae.

The name of the genus “acanthurus”, comes from the Greek “akantha”, spine, and “ura” = tail, due to the corneous spine, sharp as a razor, these fishes carry on both sides of the tail.

The name of the species “Achilles” recalls the Greek hero Achilles due to the red, gory pattern, heel-shaped, close to the caudal peduncle. For Achilles, after the legend, it was his only vulnerable point, but in this case, it is the contrary, because it indicates the position of the scalpel.

The Acanthurus achilles lives in the tropical waters of the Pacific Ocean, from the Australian coasts up to California and Mexico. 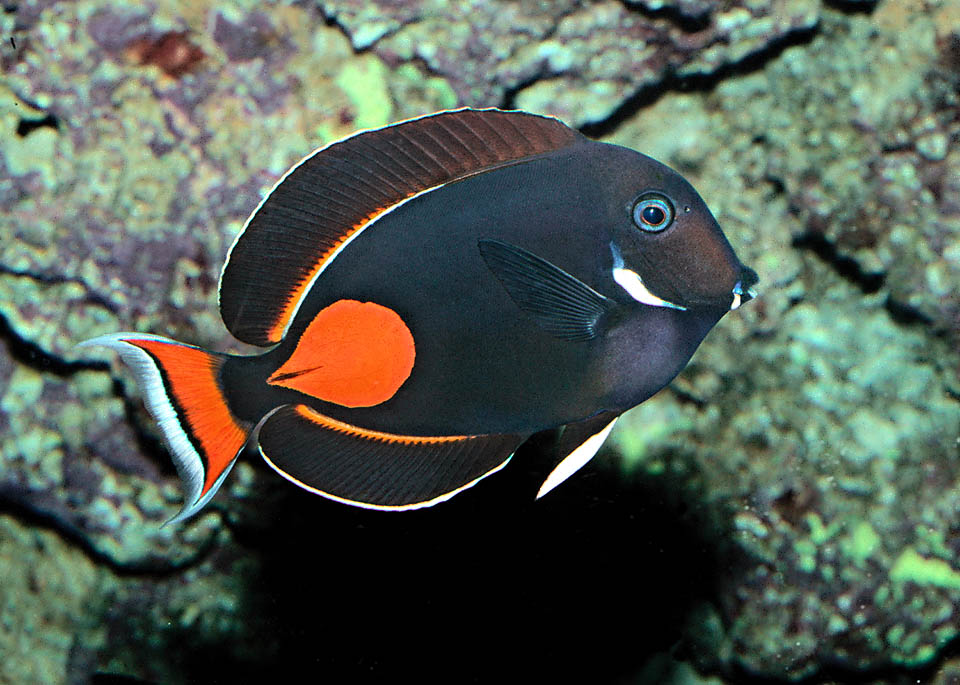 It loves the atolls and the flat coralline reefs, where, at a few metres of depth, proliferate the algae it nourishes of.

It does not exceed the 24 cm. The body is flat, higher on the front, enlarged by a splendid dorsal fin with 9 spiny rays and 29-33 soft and by the anal, symmetrical but shorter, with 3 spiny rays and 26-29 unarmed ones. Both end with a white small border, recalling, for the rest, the dark brown, almost black, of the body. At the base, they have a red-orange band, like the trapezium drawn at the centre of the caudal fin, shaped like a crescent, and the great spot of the body which indicates the attackers the position of the erectile spine, sharp and poisoned, placed on the tip of the drawing in a black small bar.

The pectoral fins are dark too, whilst the ventral ones have a white band, similar to that close to the operculum ending in the blue, like the drawing around the mouth, tiny and protractile, with only one row of maxillary teeth with which it grazes mainly, like all the Acanthurus, the small seaweeds growing among the corals.

This is an important function in the ecosystem of the slow-growing madreporic reefs that, without these valuable herbivores, should be rapidly suffocated by the fast-growing filamentous choking algae. 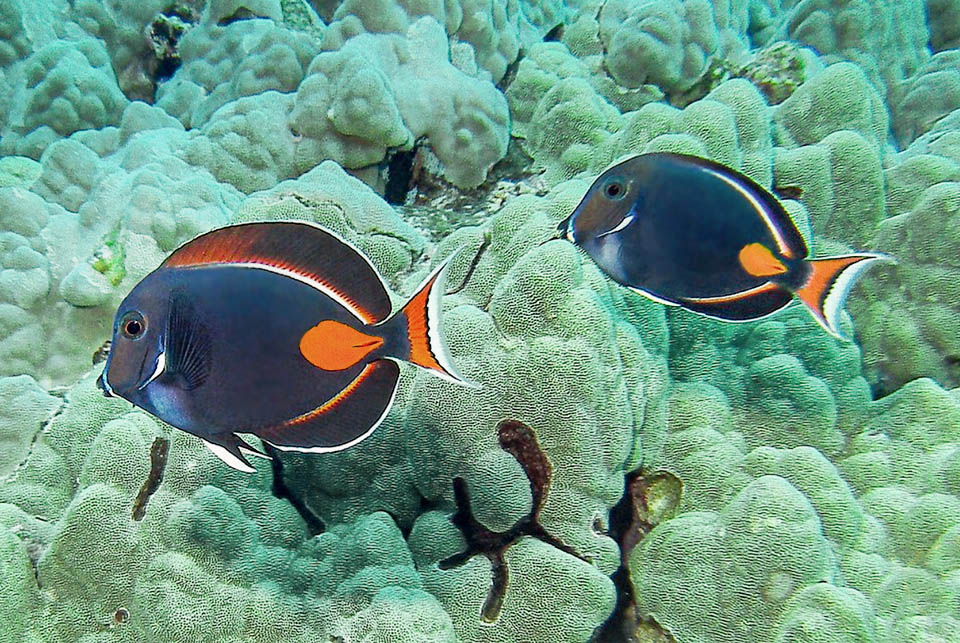 Up to 24 cm long, it lives in tropical waters of Pacific Ocean, from the Australian coasts to California and Mexico. Its flesh is toxic and may cause ciguatera © Barry Fackler

Usually it grazes in group, but is monogamous for the reproduction. The pelagic eggs originate various larval stages with the strangest forms, and only when 6 cm long the final metamorphosis takes place rendering them similar to the adults, but the Achilles spot which comes out later on, through various phases of colour reaching the maximum blood intensity in the population of Polynesia.

About the considerations on the aquarium life, please note what said for the Acanthurus leucosternon.

It stands among the least endangered fishes, with a fishing vulnerability index of 14 on a scale of 100. It is not consumed by man because of its modest size and because, living longer, the fleshes are toxic and may cause the ciguatera. Furthermore it has no foes in the wild and in ideal conditions the populations double in only 15 months.