The Powderblue surgeonfish, known in Italy as Surgeonfish with the white chest, (Acanthurus leucosternon Bennett, 1833), Actinopterygii, the ray-finned fishes, to the order of Perciformes and to the family of the Acanthuridae. 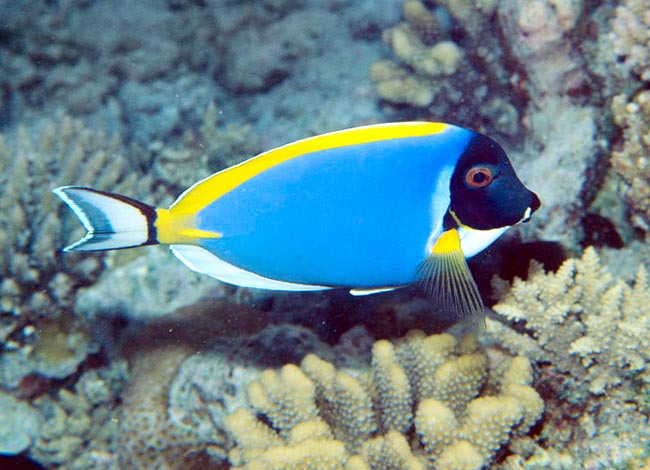 The Acanthurus leucosternon is at home in the tropical waters of the Indian Ocean, from South Africa to Somalia, Madagascar, India, Maldives, Sri Lanka, Indonesia up to the northern regions of Western Australia. It is present, in small number, along the Arabian Peninsula and is absent in the Red Sea.

It lives amongst the madreporic formations, preferably in the plain part of the reefs, where the seaweeds of which it nourishes do proliferate, but it wanders also on the precipices, without going down beyond the 25 m.

The body, blue with the black head and the white chest, is flat and can exceed half a metre, even if the average size is approximately of 20 cm.

Higher on the front, it assumes with the stretched fins an almost oval shape. The long yellow dorsal, edged of white, with a thin black line between the two tints, counts 9 spiny rays and 28-30 soft; and the anal, symmetrical but shorter, is white with 3 spiny rays and 23-26 unarmed ones. Also the ventral fins are white, of modest size, whilst the pectoral ones are yellow. The caudal, shaped like a crescent, shows elegant patterns which recall the colours of the fish, and from the yellow peduncle starts horizontally a corneous spine, sharp as a razor, which comes out from a yellow housing, in full sight against the blue of the body. This is an easy to remember detail for the predators that have experienced it. The mouth is small with only one row of incisors above and below. 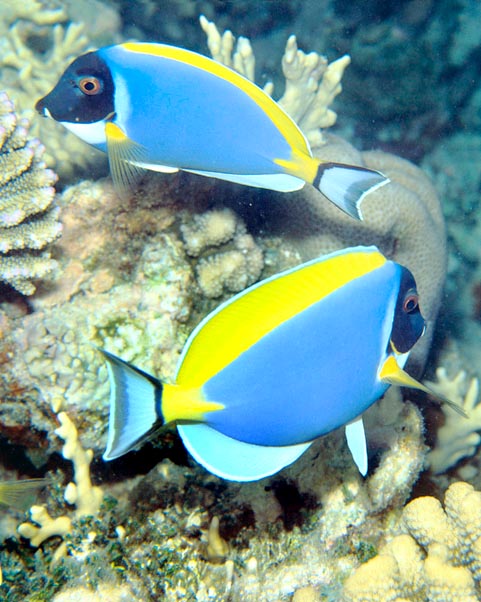 The powderblue surgeonfish lives isolated as well as in crowded schools, during the migrations looking for the food, formed by the small benthic seaweeds growing among the corals.

It is a monogamous fish which reproduces starting from the 14 cm of length. The larvae go through several stages, repeatedly changing appearance with long dorsal spines. They do not at all look like the adults, so much that, in the past, they were thought to be another species.

It goes without saying that due to its beauty it is a prize catch for the aquarists, but by sure it is not suitable for the small domestic pools, where, being territorial and unable to stay motionless becomes rapidly aggressive.

Also its feeding is not easy: it needs to be given fresh or lyophilized seaweeds and some suggest a complement with larvae of Artemia salina and whisked mussels. Furthermore, it is very sensitive to a ciliate protozoon, the Cryptocaryon irritans, which causes the white spot disease.

So, it is better to leave it in its reef, or to host it only in the huge public aquaria, where, over time, comestible algae do form. And then it can not only survive, but can even contribute in the cleaning of the pool. It has never reproduced in captivity, but it can reach the 15 years of age. The vulnerability index of this species is of 37 over 100.

In 1985 the Acanthurus leucosternon had the honour of a stamp of the Principality of Monaco.