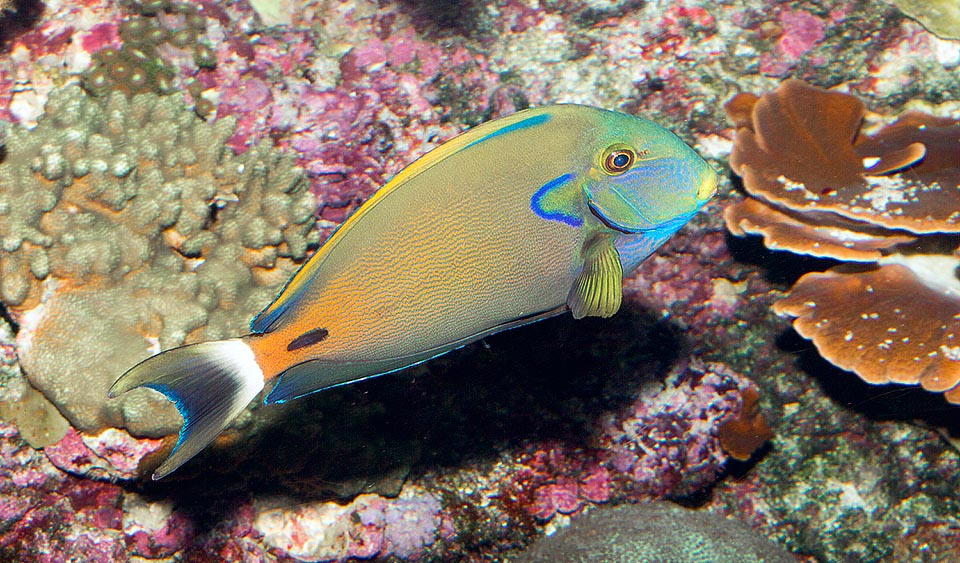 Acanthurus fowleri is easily recognized, when the pectoral fins are open, due to the showy horseshoe pattern near the operculum © Giuseppe Mazza

Il The Fowler’s surgeonfish (Acanthurus fowleri de Beaufort, 1951), belongs to the class Actinopterygii, the ray finned fishes, to the order of the Perciformes and to the family of the Acanthuridae. 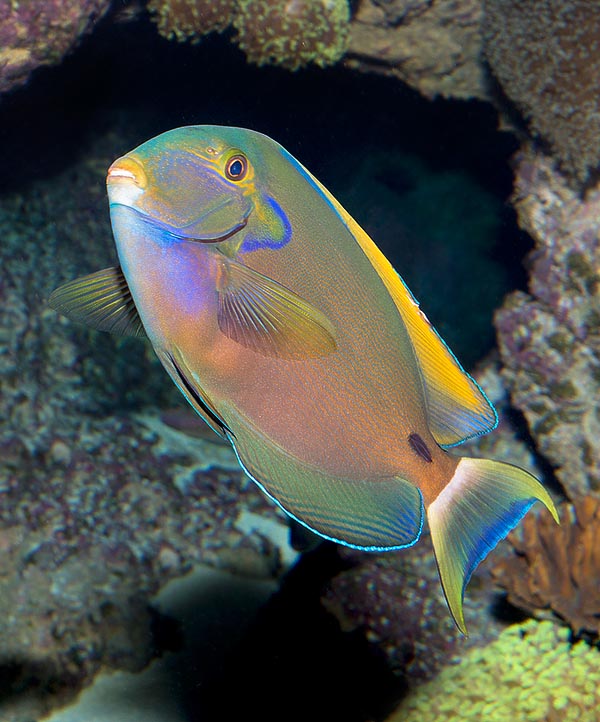 The name of the genus Acanthurus comes from the Greek “akantha“ = spine, and “ura” = tail, due to the spine, sharp as a razor, here evidenced by the black contour, these animals have on the two sides of the caudal peduncle.

The name of the species fowleri , in Latin, of Fowler, honours the memory of Henry Weed Fowler (1878-1965), curator of the fishes at the Academy of Natural Sciences in Phildelpha, and co-founder of the American Society of Ichthyologists and Herpetologists.

It is present in the tropical waters of eastern Indian Ocean and of western Pacific. Indicatively, we find it, proceeding east, along the coasts of Thailand, Indonesia, Australia, Philippines, Papua New Guinea and Salomon Islands.

The adults swim solitary or in couple on the outer side of the reefs up to about 50 m of depth, freeing madrepores and sponges from the infesting algae, but also grazing in the seagrass meadows and on the sandy bottoms where the periphyton thrives, the film of microscopic algae, fungi and debris of which they feed among other.

It can reach even the length of 45 cm. The body is flat, more or less oval depending on the scheme of the surgeonfishes, but with the profile of the head convex with front tending to vertical in the big-sized specimens. 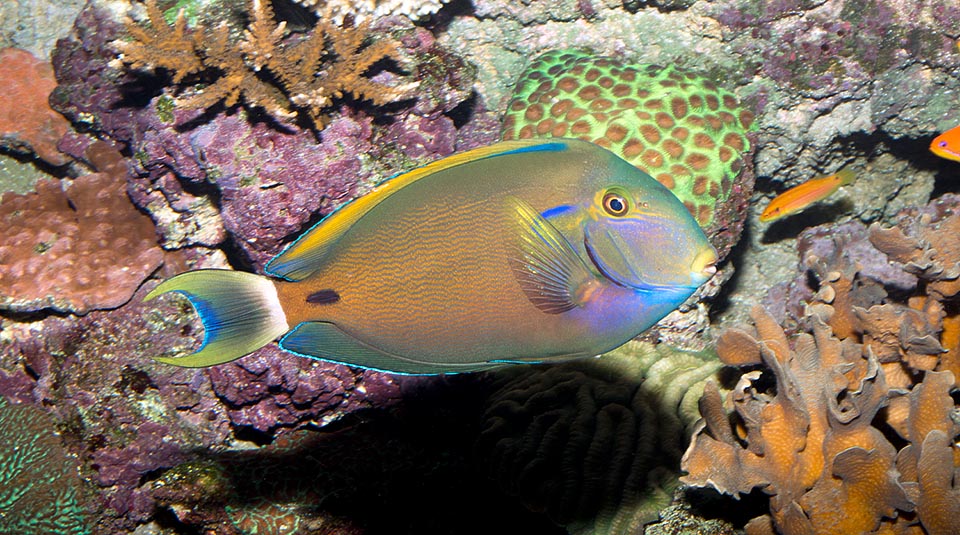 Fairly rare, swims alone or in couple, usually between 10-50 m of depth and can reach the 45 cm of length © Giuseppe Mazza

The jaw has 18 teeth, the mandible 20. They are flat, with a wavy pattern interlocking to cut the algae. The orange-brown basic colour is run by thin longitudinal dark blue lines wavy and irregular. 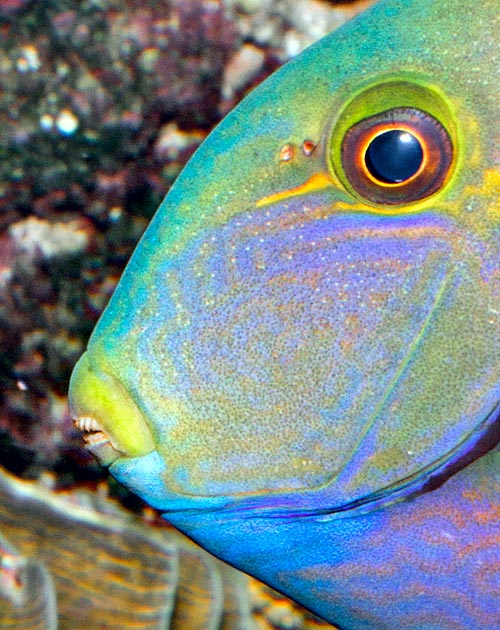 As the flat interlocking teeth with wavy pattern show, it eats algae and debris © Giuseppe Mazza

The caudal peduncle shows on both sides a dark horizontal line from where gets out, when needed, the typical and sharp surgeon blade of the Acanthurus.

In order to point out the thing to the predators, in this part of the body the background orange colour is much more intense, with a clear white break perpendicular to the blade followed by a zone dark and then bright blue. It is the logo of the weapon, a warning to exhibit, with the long caudal rays, in front of the aggressors nose.

Strategy used also by the Acanthurus bariene, quite similar species but with much more vast distribution, and a similar horseshoe-shaped drawing is present also in the sub-adults of the Acanthurus tennentii.

The Fowler’s surgeonfish nourishes of algae and debris, as often happens with the Acanthurus, therefore it is a useful scavenger of the reefs.

Not much is known about the reproduction of this species, relatively rare and surely little surveyed.

Seen the size, the adult fishes that end up in the nets are consuled by the locals, and some unlucky young is victim, due to its beauty, of the aquarium market. Seen the dimensions, it is in fact a species suitable only for the big pools of the public aquaria, not to forget its aggressiveness towards the other guests and the known feeding difficulties. 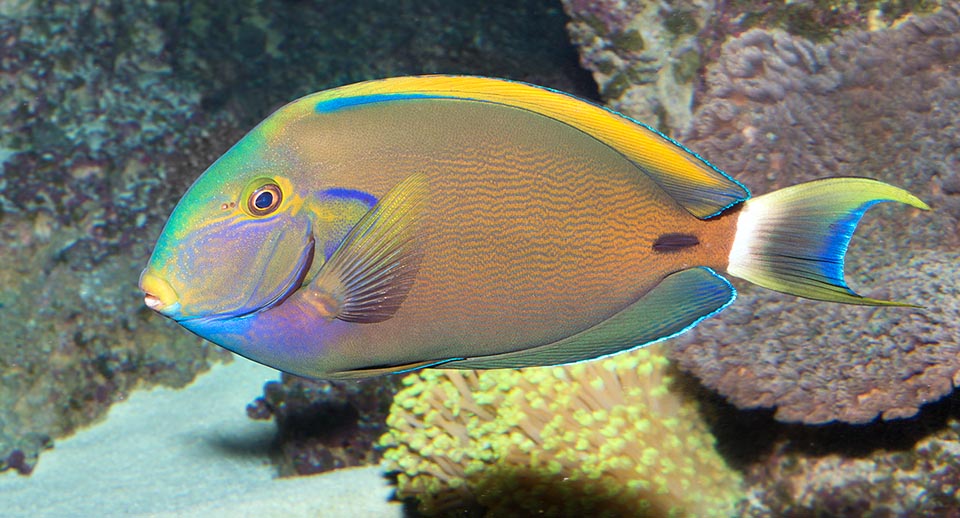 Seen diet and size, is not good for home aquaria and unluckily has already a relatively high vulnerability index © Giuseppe Mazza

The resilience of the species is good, with populations that may double in 1,4-4,4 years, but the vulnerability index is moderately high, marking already 45 on a scale of 100.

Acanthurus fowleri was last modified: May 3rd, 2022 by Giuseppe Mazza