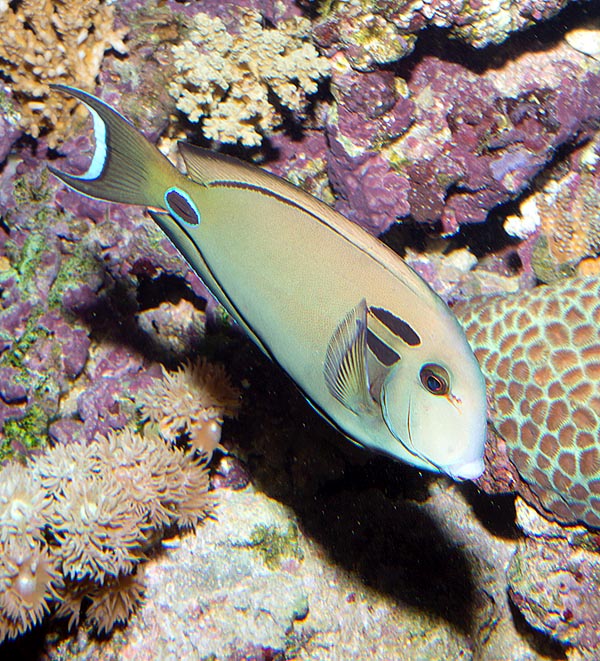 The Doubleband surgeonfish or Lieutenant surgeonfish (Acanthurus tennentii Günther, 1861) belongs to the class of the Actinopterygii, the ray-finned fishes, to the order of the Perciformes and to the family of the Acanthuridae.

The name of the genus “acanthurus”, comes from the Greek “akantha” = spine, and “ura” = tail, due to the spine, sharp as a razor, these animals have on both sides of the caudal peduncle.

The name of the species “tennentii” = of Tennent honours the memory of the Irish politician and naturalist James Emerson Tennent (1804-1869) who did collaborate with Albert Günther for the part devoted to the fishes of his illustrated book “Sketches Of The Natural History Of Ceylon”.

It is present in the tropical waters of the Indian Ocean. We find it from South Africa to the Arabian Sea, to Mauritius Island, the Seychelles Islands, the Chagos Islands and the Maldives, in India and in Sri Lanka up to Indonesia. It is, on the contrary, absent in the Red Sea.

It lives manly in shallow waters, normally in the sunny lagoons where the sea weeds do proliferate, but also on the outer side of the reefs up to 25 m of depth.

The upper jaw has 16 teeth, the lower 16-18. They are flat, with an undulated interlocking pattern for cutting the sea weeds.

The dominant colour is the brown, at times greyish, more or less olivaceous towards the tail. Over the pre-operculum, in the pre-adults, we note a design shaped like a horseshoe, to justify the common name of horseshoe surgeonfish, but starting from the 12 cm of size, this design breaks forming two parallel little bars, similar to the degrees of the military hierarchy, hence the name of lieutenant surgeonfish. 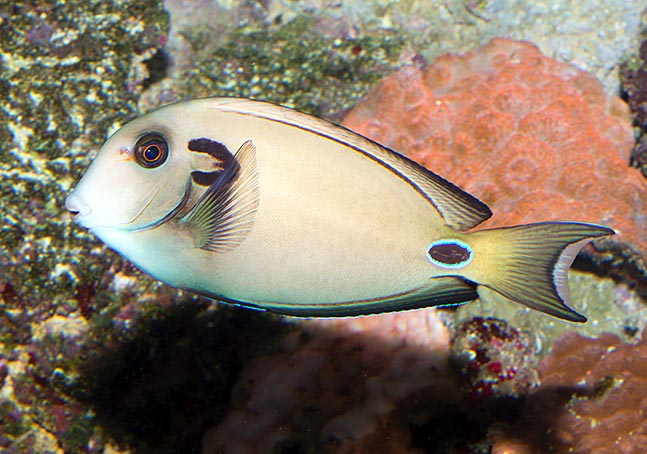 In front of the eye are some small orange traits and the caudal fin has a white zone at the centre of the crescent-shaped contour.

The blue shades are not missing, especially on the head and in the lower part of the body.

The caudal peduncle has, as customary, the erectile cutting blade, typical of the genus Acanthurus, evidenced by a black oval spot with a showy blue border. This is a clear warning for the predators that, after having tasted it, usually move towards easier species.

The doubleband surgeonfish often lives in small schools, nourishing mainly of the filamentous sea weeds growing among the madrepores, but also of the more consistent ones, and of the superficial pellicle of micro-algae and debris covering the sea-beds. In short, it is a useful sweeper of the reefs.

The eggs, fecundated in midwater, and the larvae are pelagic. The young, yellow or blackish, come back to the reef after a couple of months. Gradually, they get the livery of the adults with the characteristic design near the operculum, which, before forming the horseshoe, is a simple small bar of sub-lieutenant.

It is consumed by the locals in spite the risk, often high, of ciguatera, a serious food intoxication connected with the presence of poisonous organisms in their diet. The populations may double in 15 months and the vulnerability index of the species is of 28 per 100. Presently, it’s a modest value, but it is necessary to keep an eye on it.