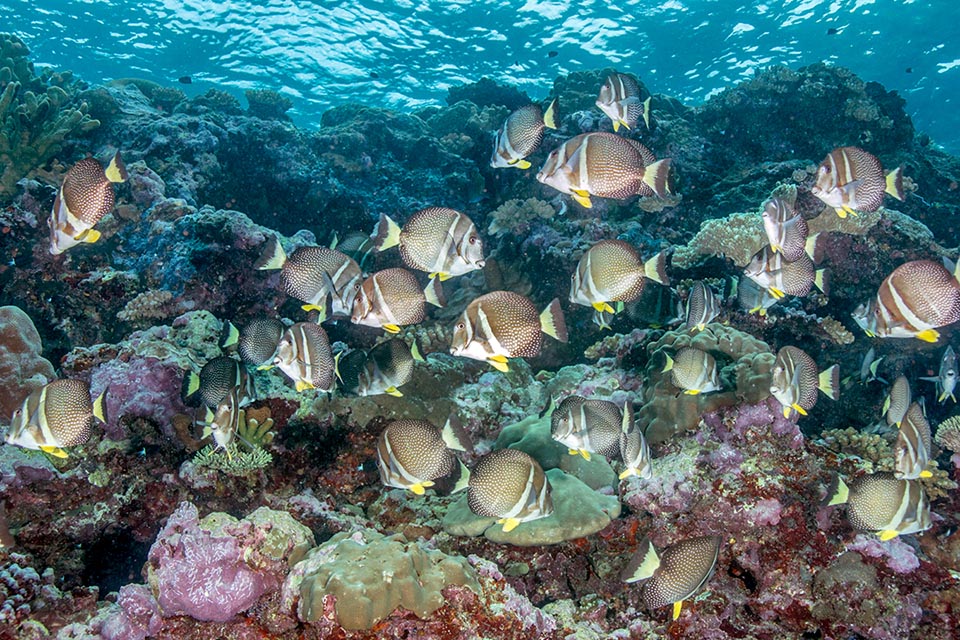 The Whitespotted surgeonfish (Acanthurus guttatus Forster, 1801), belongs to the class of the Actinopterygii, the ray-finned fishes, to the order of the Perciformes and to the family of the Acanthuridae.

The name of the genus, Acanthurus, comes from the Greek “akantha“, spine, and “ura” = tail, due to the spine sharp like a razor these animals have on the two sides of the caudal peduncle.

The name of the species, guttatus, comes from the Latin “gutta” = drop, speckle, and therefore, “with speckles”, in this case white, as it can be immediately noted from the livery.

Not at all uncommon, its has a very wide diffusion in the tropical Indo-Pacific. Moving from Africa eastwards, we find it, indicatively, in the Seychelles Islands, Réunion, Mauritius, Chagos, Maldives, Cocos and then in Indonesia, Australia, Micronesia, Polynesia and further ahead up to Hawaii and to Pitcairn Island, on the Tropic of Capricorn, and Easter Island, that marks also, along with New Caledonia, its southern limit, whilst northwards, it passes the Tropic of Cancer reaching the Japanese coasts. 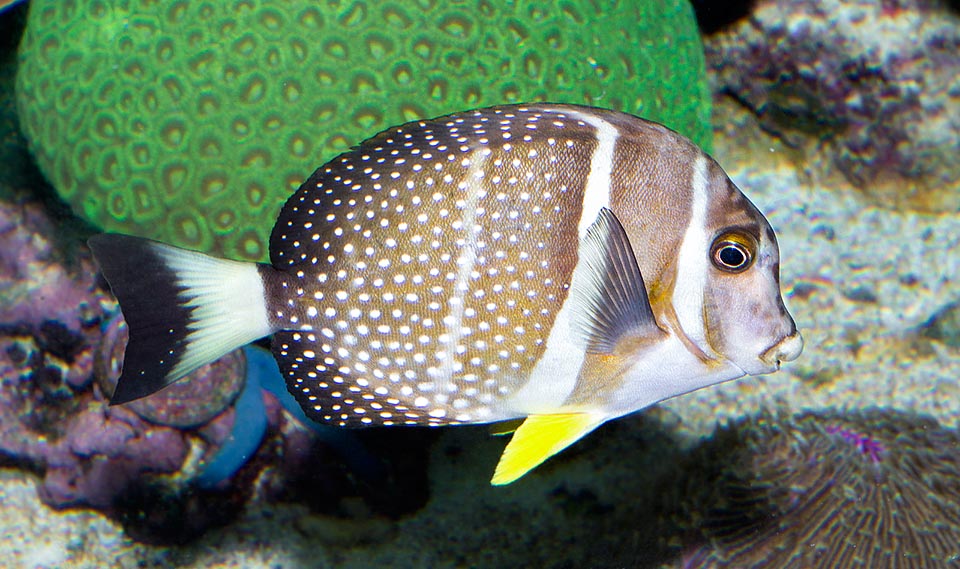 The white of the caudal fin is like a banner, to remind the intruders of the presence of an almost invisible cutting blade © Giuseppe Mazza

It lives in shallow waters, rarely venturing under the 6 m of depth, in schools that swim among the rocks covered by weeds and madreporic formations. The ideal zone for escaping predators with a camouflage pattern that imitates the bubbles of air linked to the wave motion.

The whitespotted surgeonfish may reach the 26 cm of length. The body is flat, relatively short, with the front tending to the vertical and the upper lips enlarged and protruding, as if they were a nose. In the adults the maxilla has 12 teeth and the mandible 14. They are flat, with a wavy interlocking pattern for cutting the weeds. Only one big dorsal fin with 9 spiny rays and 27-30 soft ones. The anal is symmetric but shorter, with 3 spiny rays and 23-26 unarmed ones. The pectoral fins, dark, have 15-17 rays and the caudal is lunate, almost black in the bottom and white, waving like a flag, towards the peduncle. Probably a manner for maintaining even in the darkness the contact with the school. 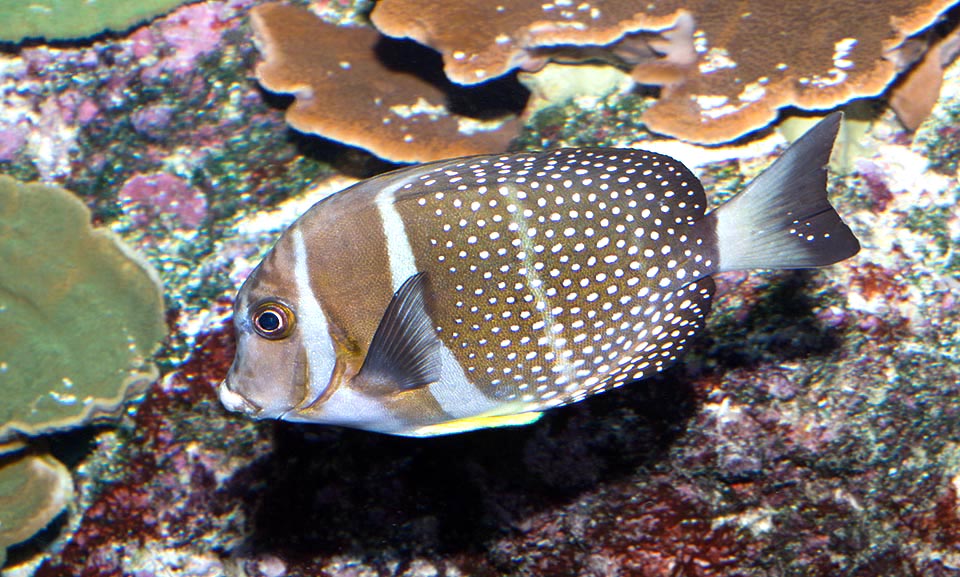 The third vertical livery band may miss or to be barely hinted, like in this photo, but from the second the body is always covered by the typical mimetic white spots pattern that imitates the air bubbles always present among madrepores and rocks due to the wave movement © Giuseppe Mazza

On the greyish brown background colour we note 2-3 white vertical bands. The first one crosses the operculum, going down from the nape to the vetral fins; the second, wider, elongates also on the dorsal fin; the third one, less marked, at times absent, stands at the middle of the fish. Starting from the second band, the body, dorsal and anal fins included, is dotted by many white speckles, typical to the species. The ventral fins are of a showy bright yellow colour, that immediately strikes the eyes, whilst the sharp blade, typical to the surgeonfishes, is small and little visible, contrary to most Acanthurus that emphasize it with showy traits of colour as warning sign to the predators. Clearly, this species does not need this: in the turbulent waters where it lives, the mimetic stripes that break the contour and the aforementioned bubble pattern suffice already to protect it.

The Acanthurus guttatus mainly nourishes of thread algae, abundant in the tide zone, where usually, excepting the l’ Acanthurus achilles , the other surgeonfishes do not go grazing, but happily nibbles the red, calcareous seaweeds, such as those of the genus Jania. 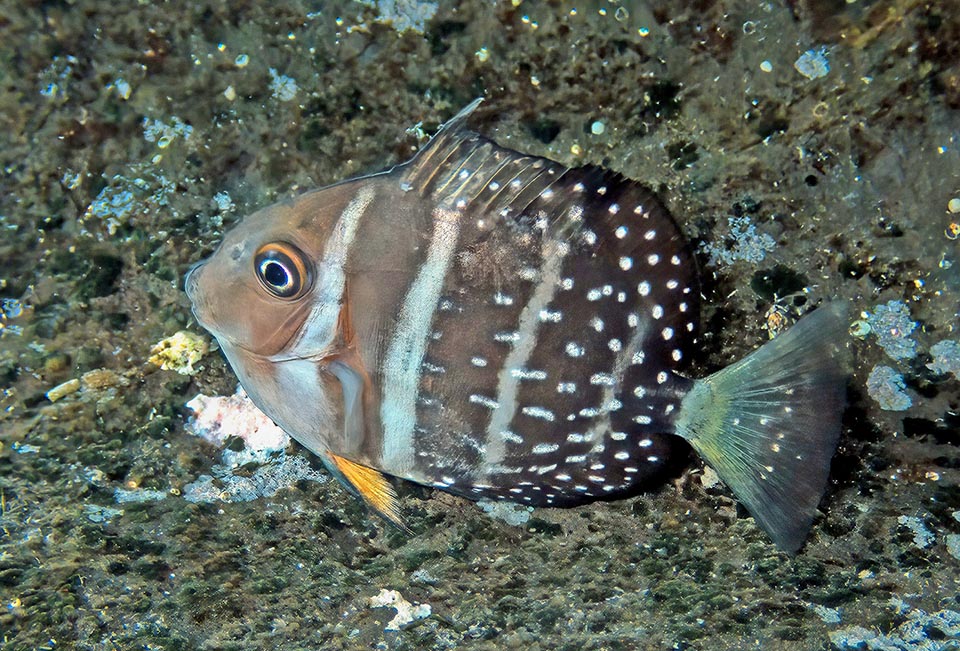 A juvenile. Acanthurus guttatus is not an endangered species due to the big diffusion and the excellent resilience, with populations that may double in less than 15 months © Jean Marie Gradot

The reproduction occurs in group, without any particular seasonal rhythm. It has been observed that, around sunset, schools of 50-500 individuals gather for laying thousands of eggs, immediately fecundated, at 4-7 m of depth at the entrance of the exit channels of the reef, where the currents rapidly transport the precious cargo into the open seas.

Not too present in the aquaria due to the known feeding difficulties, the Acanthurus guttatus is locally ifshed for food purposes, but is not an endangered species. Thanks to the huge diffusion and the exceptional resilience, with populations that can double in less than 15 months, it has an extremely low fishing vulnerability index: just 16 on a scale of 100.