The Orangespot surgeonfish or Olive surgeonfish (Acanthurus olivaceus Bloch & Schneider, 1801), belongs to the class of the Actinopterygii, the ray-finned fishes, to the order of Perciformes and to the family of Acanthuridae.

The name of the genus “acanthurus”, comes from the Greek “akantha” = spine, and “ura” = tail, due to the spine, sharp as a razor, these animals do have on both sides of the tail. The name of the species “olivaceus”, means in Latin “of olive colour”, because the first and second part of the body recall the colour of the olives at different stages of ripening.

It is present in the tropical waters of the Indo-Pacific. We find it, just to give an idea, in Mauritius, the Cocos, and Christmas Islands, in Malaysia, Indonesia, Australia, New Guinea, Micronesia, New Caledonia, Philippines, Taiwan, and China up to the southern part of Japan. Southward, it reaches Lord Howe Island, eastward, the Marquesas Islands, the Hawaii and Cocos Island.

The adults live between the 10 and the 50 m of depth, in zones often rocky or mixed of sand and debris; the juveniles prefer the shallow waters, less than 3 m, and the more protected areas of the reefs. 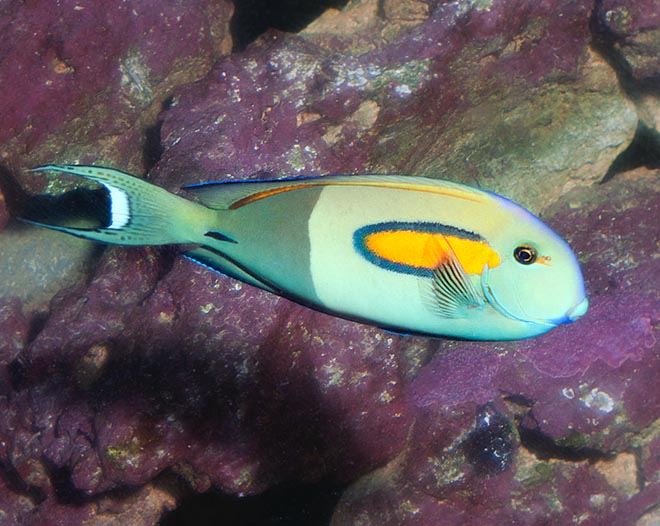 The operculum and the pre-operculum have some striae and there are several gill rakers.

The livery is unmistakable: the first two thirds of the body are pale, with a showy oval orange dot edged of black-violaceous which starts from the end of the operculum; then, suddenly, with a sharp break, the rear third is dark; brown-greyish, more or less olivaceous. And this contrast between the two zones increases, with a clear mimetic function, when the animal is under stress. The caudal peduncle has, as usual, the cutting blade, typical of the genus Acanthurus, evidenced by a black trait, and the caudal fin, ornamented with dashes and aligned dots, ends in a white zone at the centre. But the pectoral fins, all others are edged in blue.

The orangespot surgeonfish lives alone or in small groups, nourishing mainly of filamentous, but even more consistent, seaweeds, of diatoms, foraminifers of the genus Calcarina, small invertebrates, and often of the superficial pellicle of microscopic algae and debris covering the bottoms. The eggs are pelagic and the juveniles show a livery completely different from that of the adults. At the beginning, they are completely yellow; then the orange stripe appears and, finally, the typical broken livery.

The Acanthurus olivaceus is consumed by the local populations in spite of the risk, often high, of ciguatera, a serious alimentary intoxication related to the presence of poisonous of organisms in their diet, and the juveniles are at times sold as aquaria fishes. The populations may double in 1,4-4,4 years and the vulnerability index of the species is of 18 per 100. A value, at the moment, modest, but which is better to be kept under control.