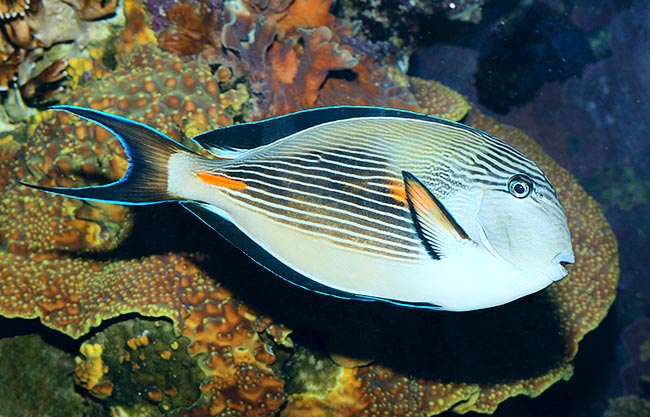 The Sohal surgeonfish (Acanthurus sohal Forsskål, 1775), belongs to the class of Actinopterygii, the ray-finned fishes, to the order of Perciformes and to the family of Acanthuridae.

The name of the genus “acanthurus”, come from the Greek “akantha”, spine, and “ura” = tail, because of the spine, sharp like a razor, these fishes do have on the tail.

The name of the species “sohal” is the name with which the Arabs call this fish.

They often talk of it as a species endemic to the Red Sea, but actually, it is common in good part of the western Indian Ocean: in the Arabic Sea, in the Gulf of Aden and, as it seems, also up to the Seychelles and Madagascar.

Then, there is an interruption and we find it in the Pacific in Taiwan, where it appears to be native and not introduced, as is the case of Florida. 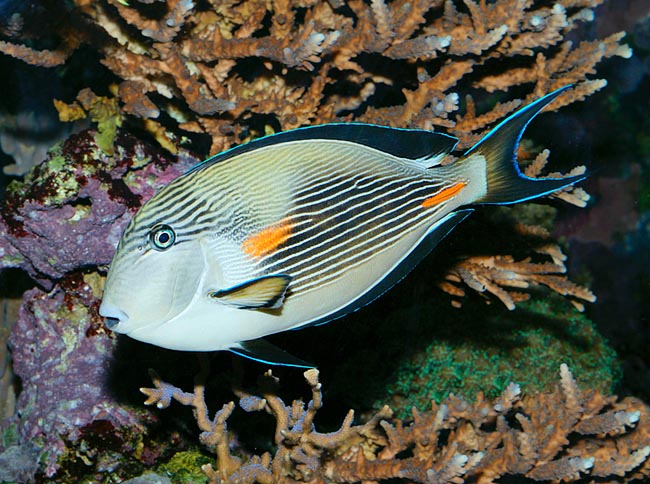 It moves restlessly in the reef looking for algae, sheltering if endangered under the Acropora © Giuseppe Mazza

It lives in the madreporic formations, usually on the shelves and on the ridges, but never goes down under the 20 m of depth. It has a predilection for the Acropora corymbosa and Acropora pharaonis madrepores growing on the precipices, under which it shelters, well protected by their spikes, in case of danger.

It can reach the 40 cm, but its average size stands around the 30 cm.

Also here many fins are edged of blue, but the intense yellow and blue stripes are missing. Here are rather horizontal bands almost black on a clear background with bluish reflections, tending to yellow only on the back. The belly is similar, without patterns, but these marmorize in the upper part of the body fading to become almost invisible on the operculum. 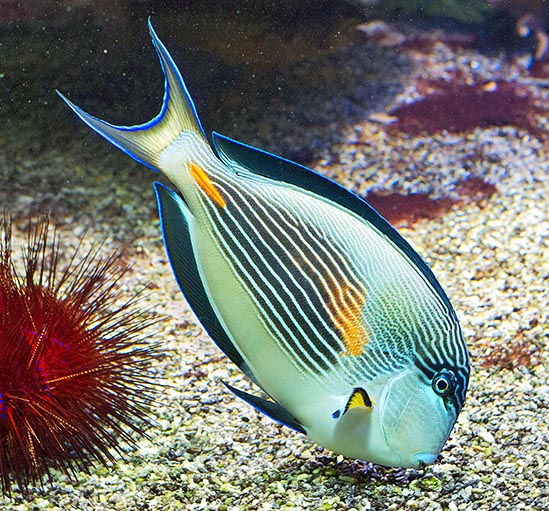 Only the zone near the eyes recovers, disguising it, the more marked tones of the drawing.

The cutting blade of the caudal peduncle, which in the Acanthurus lineatus was almost hidden, here is emphasized by the bright orange colour of the protective sheath, a clear sign of menace for the importunators, in a clearly aposematic context. Another orange spot is present immediately after the pectoral fins by mid height of the body.

The sohal surgeonfish is a fast swimmer capable to well extricate inside the labyrinth of corals. Territorial and often aggressive, it is found even in numerous groups exploring, restlessly, the rocks and the reef where they graze especially filamentous seaweeds or those belonging to the genus Sargassum, but nourish also of debris and of the pellicle of microscopic algae covering the bottom.

In aquarium it easily accepts food of animal origin, and it is therefore possible that in the wild it enriches often its diet with small crustaceans and other animals living among the seaweeds and the corals.

The eggs are pelagic and after various larval stages, by the 2 cm of length, they gradually assume the shape of the adults. Even if the flesh is not prized, it is consumed by the local populations and feeds the dreary trade of marine fishes for the domestic aquarium. However, the species is not endangered; it has a vulnerability rate of 32 per 100, with populations which can double in 1,4-4,4 years.