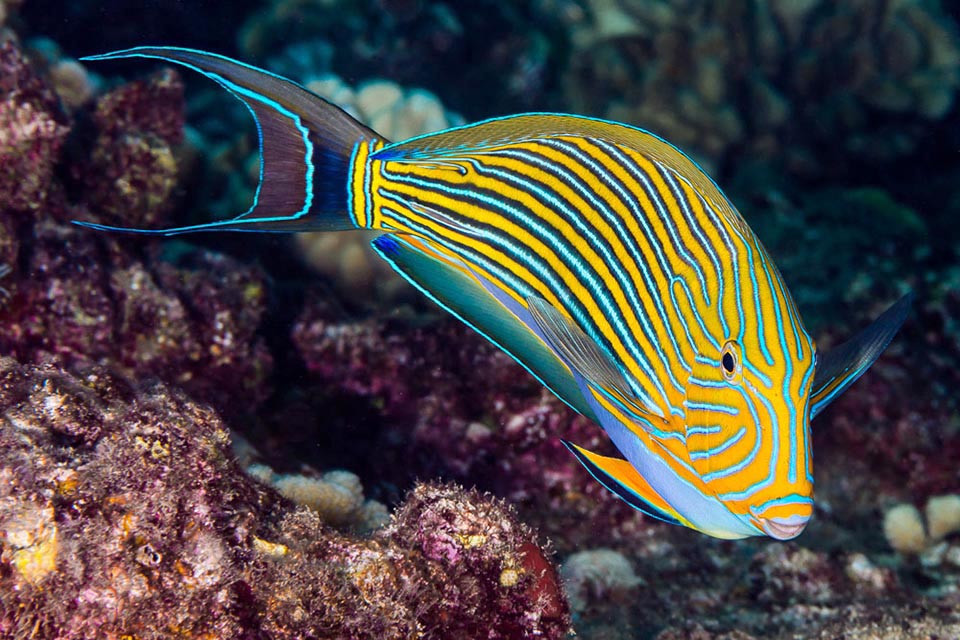 The Lined surgeonfish (Acanthurus lineatus) has a very vast range in the tropical Indo-Pacific, from the African coast up to Hawaii and Marquises Islands © François Libert

The Lined surgeonfish, also known as  Blue-banded surgeonfish (Acanthurus lineatus Linnaeus, 1758), belongs to the class of Actinopterygii, the ray-finned fishes, to the order of Perciformes and to the colorful family of Acanthuridae. The name of the genus Acanthurus comes from the Greek “akantha”, spine, and “ura” = tail, due to the razor-sharp spine these fishes do have on both sides of the tail. The name of the species comes from the Latin “lineatus” = lined, with lines, due to the yellow and blue longitudinal stripes.

The Acanthurus lineatus has a very vast diffusion in the tropical waters of the Indian and the Pacific Oceans, where, however, does not reach the American coasts stopping at the Hawaii and the Marquises Islands.

It usually lives in the plain part of the madreporic formations, in less than 3 m of water, but can go down along the ridges up to around the 15 m. 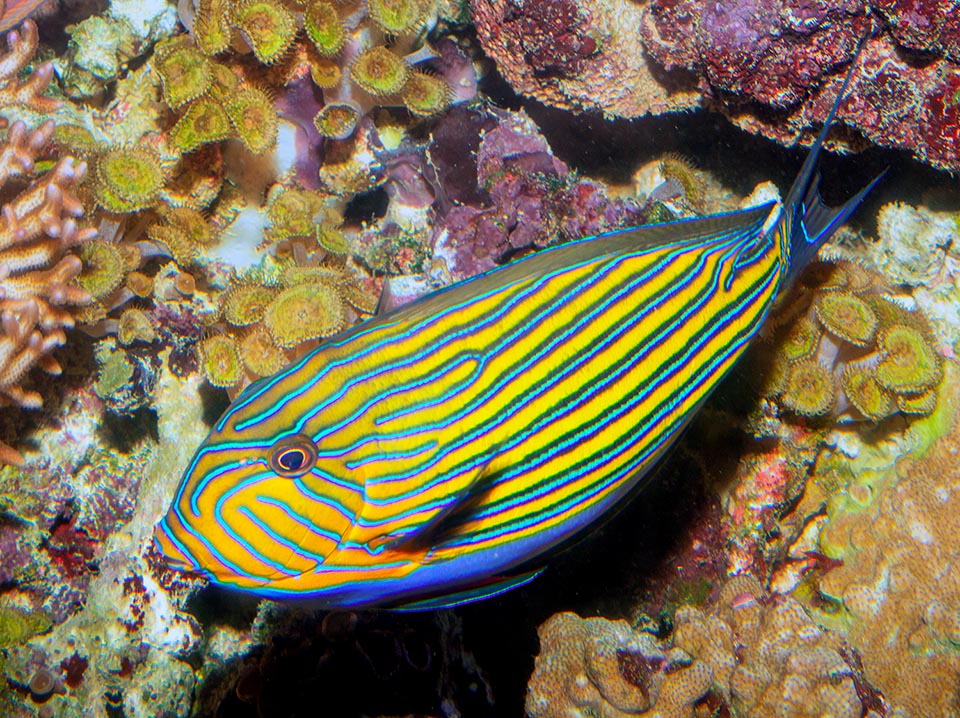 Very common, even 38 cm long and showy, it never goes unnoticed because it goes swimming in less than 3 m of water, descending only rarely towards 15 m © G. Mazza

At the base of its peduncle, in the midst of a blue line, stands the famous erectile and cutting spine, covered by poisonous mucus which produces very painful wounds.

Its presence is not emphasized by a drawing, like in other Acanthurus, as a warning for the predators, because, seen the showy livery, easy to remember, there was no need for it. Not surprisingly, in Indonesia the lined surgeonfish is called “Clown surgeon” and in the USA “Clown surgeonfish”. 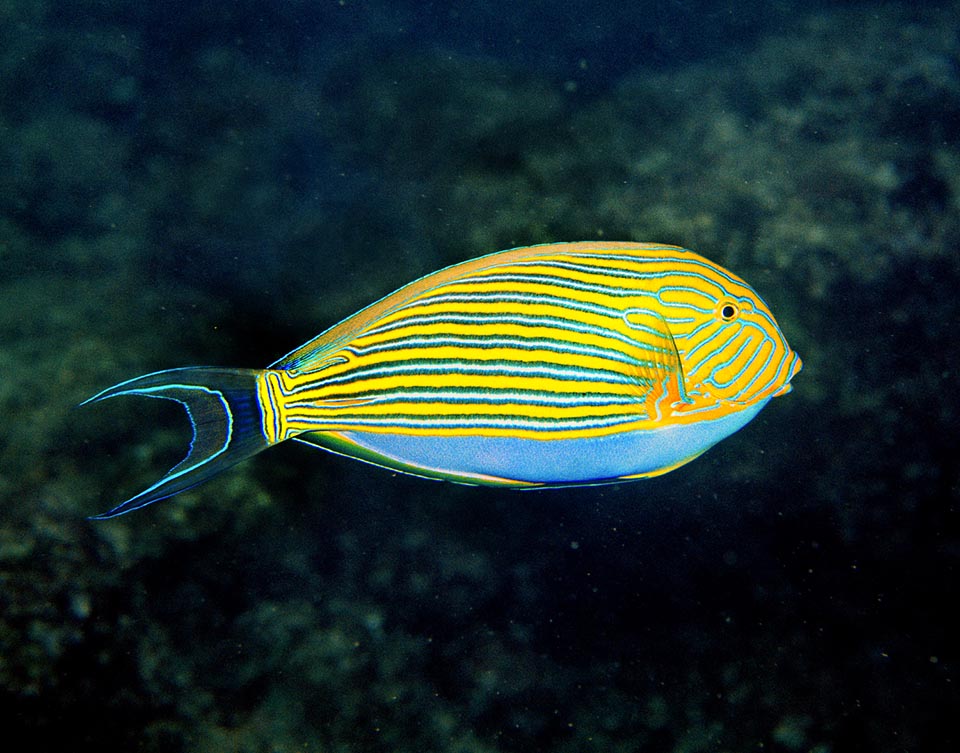 The livery is unmistakable, and to warn the predators doesn’t need to emphasize with showy spots the poisonous and sharp spine just visible on the caudal peduncle © Giuseppe Mazza

The mouth is relatively great and solid, due to a rich, not exclusively, vegetarian, diet. Several gill rakers are present.

The males are very territorial and allow only the females to enter their submerged pastures and they end up forming a small harem.

It is a restless fish, which nourishes of various species of seaweeds, often even fleshy, mostly belonging to the genera Caulerpa, Cladophora, Codium, Dictyota, Jania, Laurencia, Padina, Polysiphonia and Sphacelaria, and which it often enriches its own diet with the small crustaceans it may find in the surroundings. 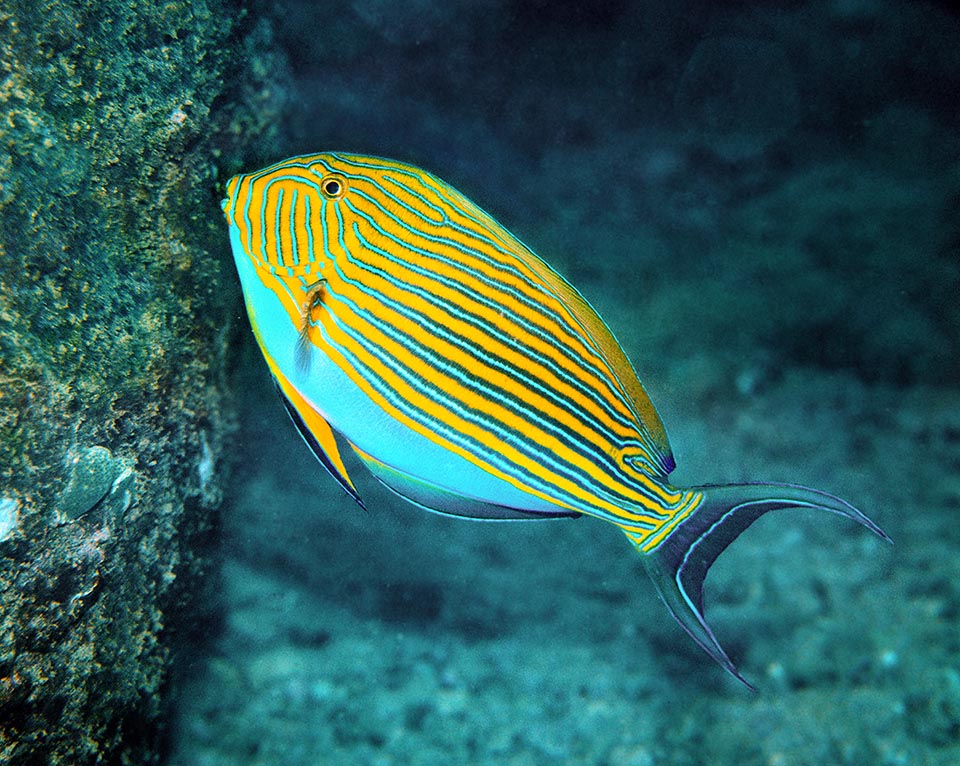 It eats seaweeds and small crustaceans it finds among the fronds. It is not endangered, is little fished also because its flesh can aver toxic, under ciguatera risk © G. Mazza

Numerous aggregations may take form during the reproductive period, but there is not a collective spawning. The fecundation remains a pair affair. The eggs are pelagic and not much is known about the larval stages.

Though often fished for the aquaria, seen that it creates less feeding problems than the exclusively vegetarian surgeonfishes, even if the Polynesians regularly eat it grilled, unmindful of the ciguatera, a possible alimentary intoxication induced as is the case of Acanthurus dussumieri by the feeding of this species, the fishing vulnerability of Acanthurus lineatus is very low, marking only 23 on a scale of 100.

The resilience is excellent, with a possible doubling of the populations in 1,4-4,4 years.