The Dussumier’s surgeonfish (Acanthurus dussumieri Valenciennes, 1835) belongs to the class of the Actinopterygii, the ray-finned fishes, to the order of the Perciformes and to the family of the Acanthuridae.

The name of the genus “acanthurus”, comes from the Greek “akantha”, spine, and “ura” = tail, due to the sharp spine these fishes carry on both sides of the tail. The name of the species, “dussumieri” = of Dussumier in Latin, recalls the naturalist Jean-Jacques Dussumier (1792-1883) to whom were dedicated several animals, like the Nectarinia dussumieri of the Seychelles, because he was collecting fishes of the Indian Ocean on account of the Natural History Museum of Paris.

The Acanthurus dussumieri has a very vast distribution in the tropical waters of the Indian and Pacific Oceans, where, however, is not able to reach the American coasts and stops at the Hawaii.

Usually it lives in the outer part of the madreporic formations, in relatively deep waters, between the 10 and the 130 m. 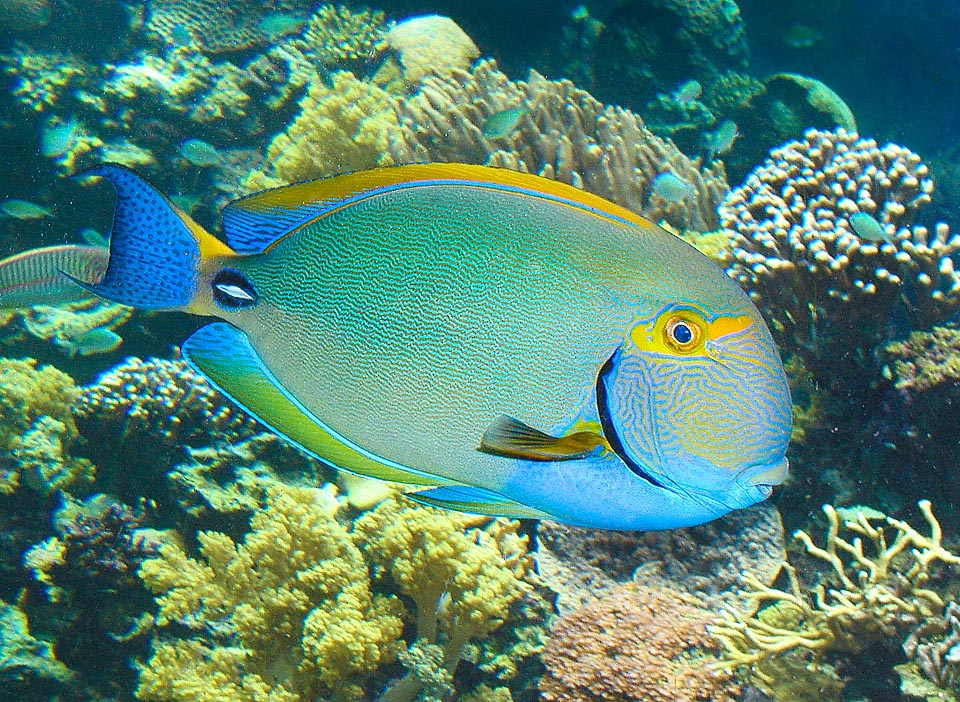 At the base of its peduncle, protected by a white sheath and surrounded by a black spot for a better highlighting and as a clear warning to the importunate, stands the erectile blade typical of the genus, not poisoned. The whole colour is greenish brown, depending on the zones, but when observing closely the livery, the details are splendid. Apart the typical orange stripe near the eyes, resumed by the colour of the dorsal fin, the body is a whole of wavy arabesques which lead towards the blur throat and the tail studded with blue over blue spots recalling the ending of the anal fin and of the dorsal one. For a surgeonfish, the mouth is relatively big and solid. Several gill rakers are present.

The Dussumier’s surgeonfish is active mainly during the day. It nourishes of the pellicule of diatoms and of microscopic green and blue-green algae which deposit on the sandy bottoms, of phytoplankton but also of zooplankton, organic debris and of small invertebrates. It lives in small schools, isolated or paired, especially during the reproductive period. The eggs are pelagic and the populations double all going well, in 4,5-14 years. But even if it is fished for the human alimentation, in spite of the ciguatera risk, an alimentary intoxication connected with the presence of poisonous organisms in their diet, it is not, by sure, an endangered species. The vulnerability index is of 36 over 100.