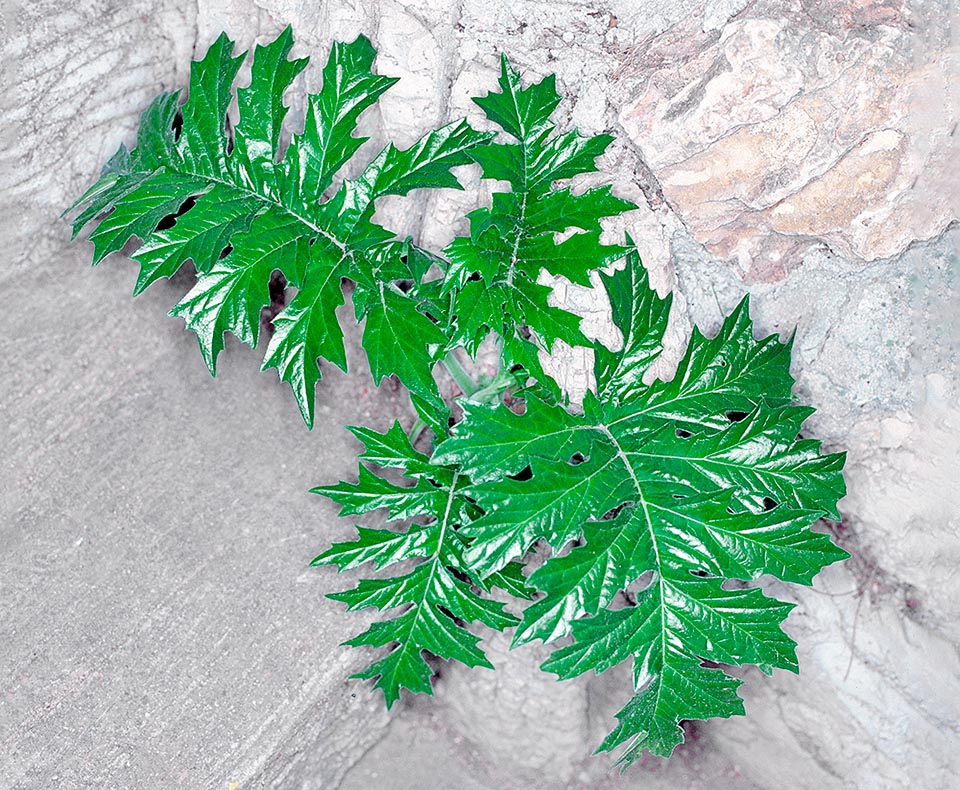 Species peculiar to Mediterranean Europe, Achantus mollis has been introduced for its beauty in various regions with similar climate © Giuseppe Mazza

The generic term Acanthus comes from the Greek “akantha” = spiny, due to the spiny bracts of the inflorescence, derived from aké = point, needle and from ánthos = flower; the specific term mollis refers to the leaves that appear plump, supple. 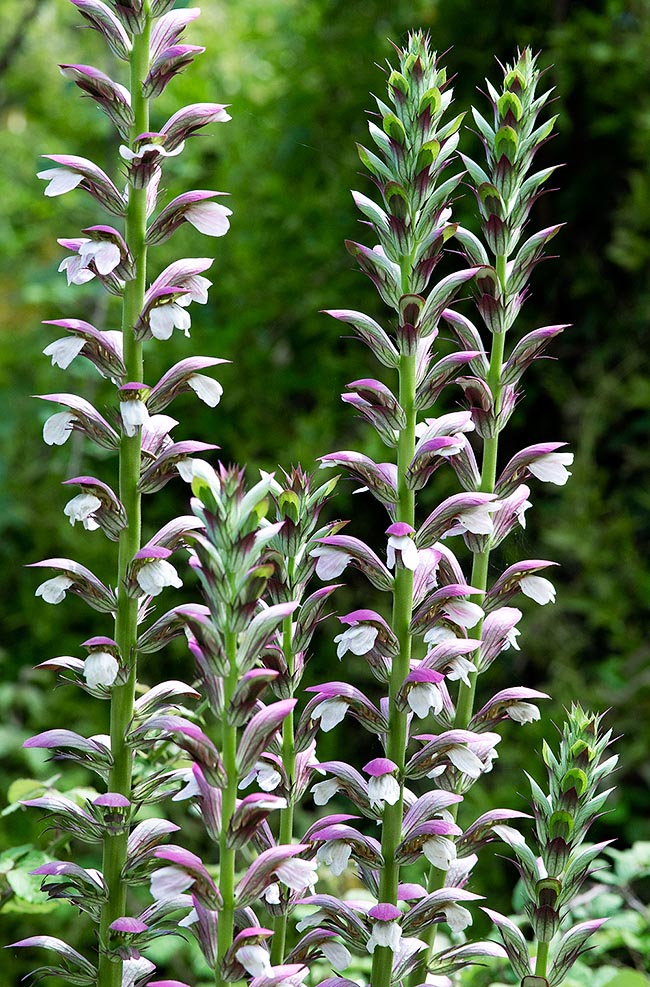 The flowers, elegant as the leaves, are arranged in spiky, at times dense, inflorescences © Giuseppe Mazza

In the Greek mythology, Akantha was a nymph Apollo desired strongly but she rejected him and scratched him on the face. As punishment, the god transformed her into the spiny flower of bear’s beech.

The plant has erect simple stems, cylindrical, rather woody at the base.

The basal leaves have no spines, sparsely hairy in the upper page, pubescent along the veins on the lower page and on the petiole, up to 80 cm long, coriaceous.

The foliar laminae are of bright green colour, darker above, pinnatipartite with 6-7 incised-toothed lobes.

The cauline leaves (upper leaves) have a reduced size and get to measure 1,5-4 cm x 1-2,5 cm, sessile (with no petiole), with an ovate lanceolate profile and are equipped with spines.

The flowers are arranged in inflorescences with at times a dense spike.

Each flower is placed at the axilla of a bract and of 2 lateral bracteoles with entire or sub-spiny margin, a little more than 2 cm long. The calyx is persistent and displays sepals merged at the base; the bracts as well as the calyx have an intense purplish red colour, particularly along the veins and the margins. The corolla is white, reddened on the veins, up to 5-6 cm long, with one only trilobate lip that slightly gets out from the calyx.

It blooms in summer.

It multiplies through seeds by late March, or, more easily, in autumn by transplanting the underground portion. It requires deep and light soil. This plant has a predilection for cool and humid locations, therefore, often, is utilized, for ornamental purposes, being suitable for beautifying the most shady places of the gardens. 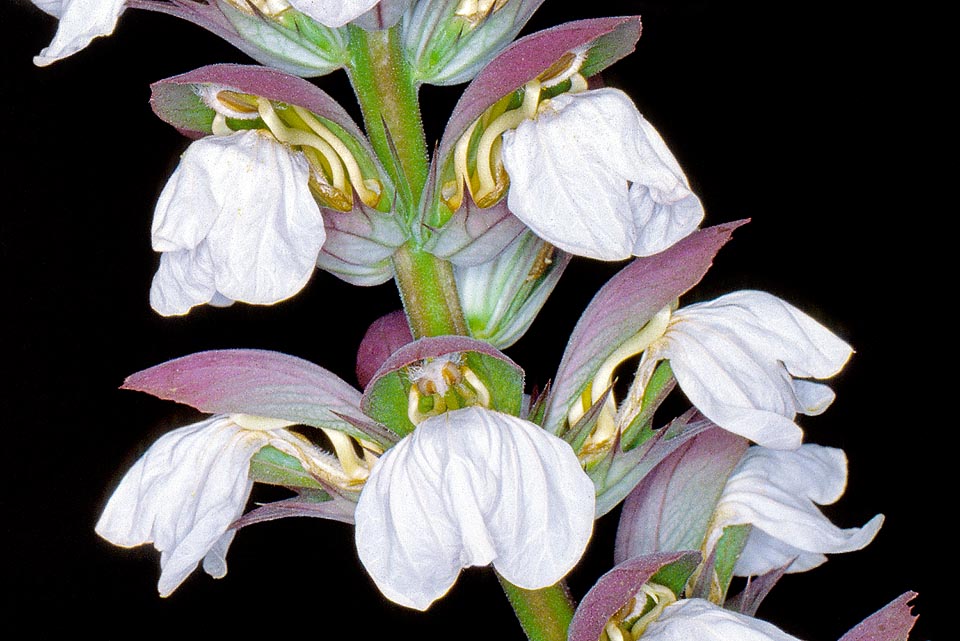 The calyx is persistent and displays sepals merged at the base. White corolla reddened on the veins, up to 5-6 cm long, with one trilobed lip protruding slightly from the calyx. The androecium is formed by 4 epicorollin stamens. Gynoecium formed by a bilocular ovary surmounted by long persistent style, yellowish, and by a bifid stigma © Giuseppe Mazza

In any case, as it expands easily, it is to be contained in special flower beds in order to prevent the root system from expanding beyond.

The dry flowers are used by the florists for floreal compositions.

The Bear’s breech is cold-resistant. As a matter of fact, the prolonged frosts can cause damage to the aerial part but not to the underground part that will recover in spring. 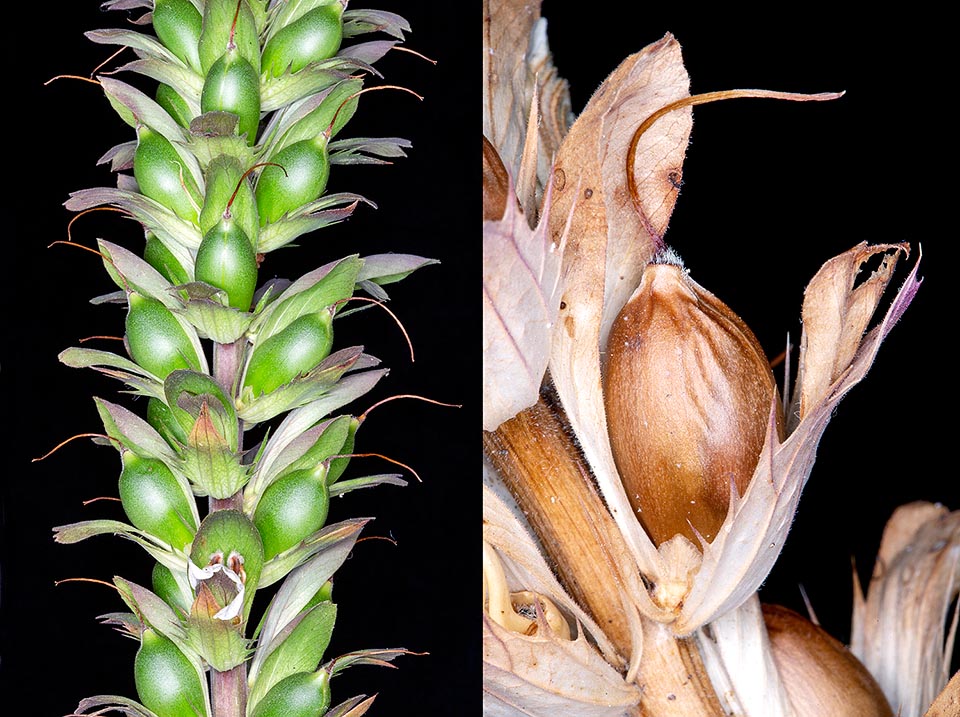 The Bear’s breech is known for its curative properties since the old times. Pedanius Dioscorides (ca. 40 – 90 AD) in his treatise De materia medica suggested compresses of roots of Bear’s breech for treating the burnings and for protecting the dislocated joints. In the past, the leaves, rich in mucilage, were used, in poultices, for treating inflammations, insect bites and against tuberculosis.

Presently, the Bear’s breech is inscribed in various European pharmacopoeias and utilized, as infusion, as emollient due to its sedative, astringent properties and to fight irritations to the pharyngeal apparatus and of the digestive system. 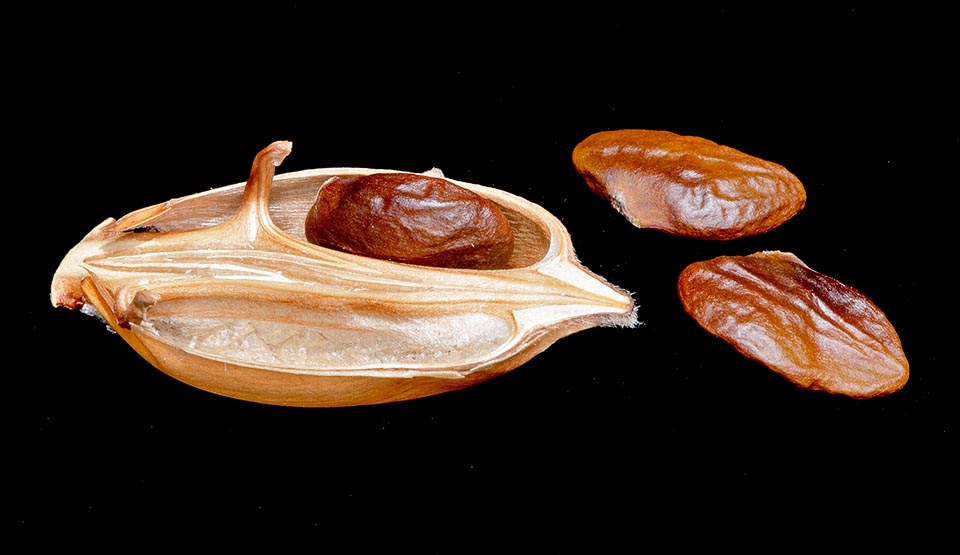 The Bear’s breech can be attacked by terrestrial Gastropod molluscs, such as snails, slugs that nourish of the young leaves.

Pliny the Older (23 – 79 AD) in his Naturalis historia, great encyclopedia of the time in 37 volumes, suggests inserting plants of Bear’s breech in the gardens of the Romans in order to improve their beauty (liber XXII). 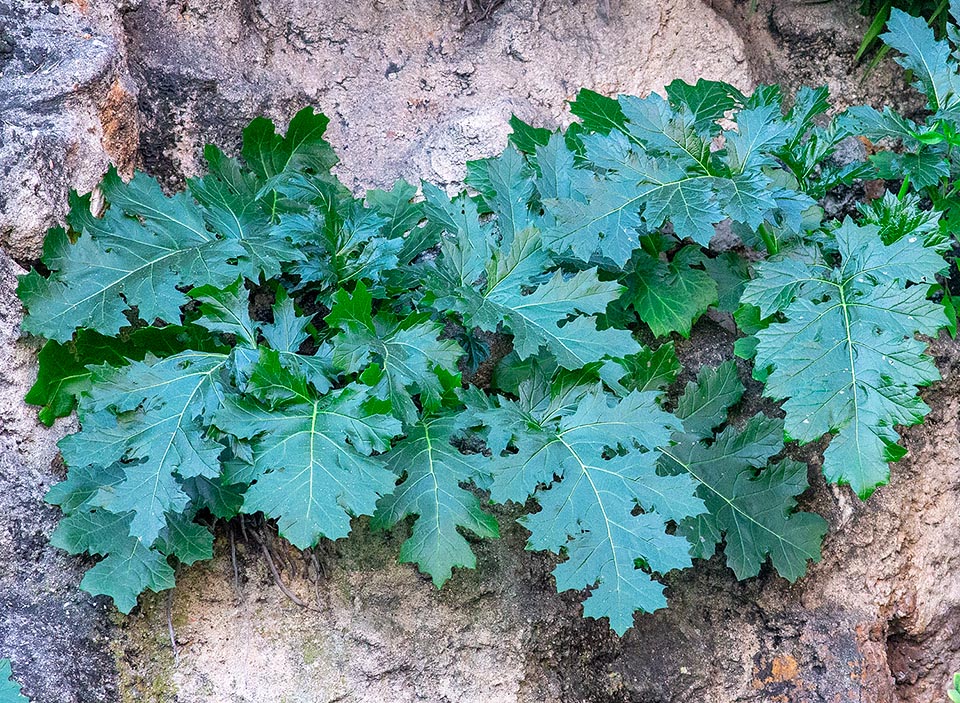 The 50-150 cm tall species in winter loses its aerial part restarting in spring from the roots. It loves cool and humid sites in shady gardens© Giuseppe Mazza

Marcus Vitruvius Pollio (80 BC ca. – 15 BC ca.) in his opus De architectura writes that Callimachus (V century BC), Athenian architect, having remarked the elegance of the leaves of Bear’s breech coming out from a votive basket put on the tombe of a young Corinthian girl, passed away prematurely, got the inspiration for the realization of the decoration of the Corinthian capitals.

→ To appreciate the biodiversity within the family ACANTHACEAE please click here.