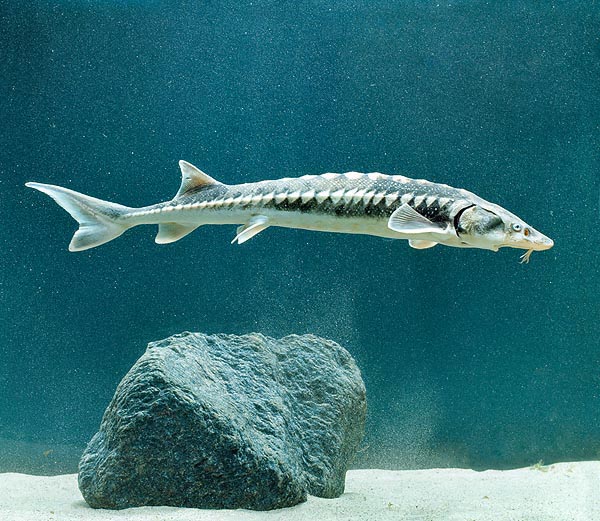 These species, mysterious in their behaviour, are the biggest fishes in the continental fresh or brackish waters, seen that they can often live at the mouths and in the estuaries of the rivers.

They are renowned animals due to their most valuable fleshes and to their eggs, from which the caviar is obtained, a delicious food, more or less precious depending on the species. The human gastronomic attention towards this group is unluckily the main reason of the rarefaction of all their species and subspecies or races.

Since about thirty years, they are trying to stem and stop this problem with methods of pisciculture or fish farming for the most requested species, with more or less good results, as is the case for other fish species.

The IUCN however considers as endangered all the species of this family and some, very close to the extinction, appear in the red list of the endangered species. And these last coincide exactly with those fished for getting the best caviar from the females. It is the Beluga (Huso huso), also called European sturgeon or Great sturgeon, from whose females the obtain, after salting, the black caviar, the most valuable one, also called “true caviar” and the European sturgeon (Acipenser sturio), from which they get a caviar tending more to the red, no to be mistaken with the red caviar typical of the salmons, of little value, not wrongly called “false caviar”, which has anyway a good market, especially in Asia. Furthermore, of these two species, like of the others leading to the family of the Acipenseridae, is utilized also the swim bladder for technical purposes, as, for instance, clarifying the wines. The catch of these fishes happens by means of very robust “cast nets” and “gillnets”, seen the strength, size and tenacious character they have. The species of sturgeons known to the zoology are nowadays the following: 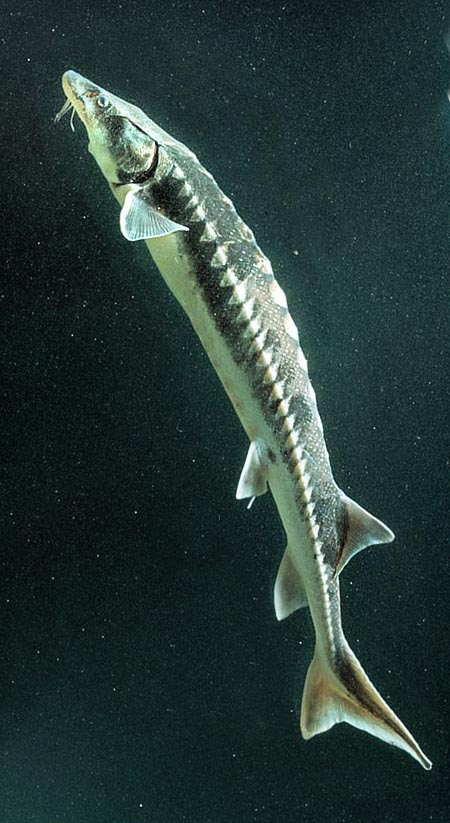 At times, from different species of sturgeons, do appear spontaneous crossings, known under particular popular names. In Russia, since the times of the old U.R.S.S., such hybrids are produced artificially by ichthyological biologists, as, prevailing on the pure species, for what the growth and the biology of the population are concerned, they are often released into the ponds for the repopulation.

In this text we shall treat of the Sturgeon (Acipenser sturio). The other species will be treated in their own texts.

The Acipenser sturio is localized on the European coasts, from North Cape up to the Black Sea, through the Mediterranean, in North Atlantic and also on the American coasts. In the Baltic Sea, in the Onega and Ladoga lakes and along the Siberian coasts.

Along the Italian coasts, it is found in the Mediterranean Sea as well as in the Tyrrhenian and Adriatic Seas where, as it does in other seas, taking advantage of its “euryhaline” characteristics, it goes upstream, like the salmons, being an “anadromous” species, the mouths and the estuaries of several rivers.

All the species of this group, and so also the sturgeon, carry on an isolated, solitary and very mysterious due to the habits characterizing them, still in part unknown to the ichthyological biologists.

In the fresh waters where they reproduce, they tend to live towards the gravel and cobbled bed, where they are continuously moving and churning-up the mud and the gravel with the long snout looking for food, formed by the fauna of the bottom: crustaceans, molluscs and annelids. The same occurs when at sea. Occasionally, they predate also small bottom fishes, such as, in a zone of the North Sea (Wattenmeer), the members of the genus Ammodytes.

The members of the family of the Acipenseridae have common morphological lines. In fact, they are slender fishes, of remarkable dimensions, equipped with all the fins.

The caudal fin is “heterocercal direct”, that is asymmetrical, where the vertebral axis bends towards the dorsal lobe, which becomes bigger then the ventral one. The superior, or dorsal, lobe has thicker dorsal edge. The dorsal fin is shifted towards the tail; with the beginning immediately before the anal fin. The body has five longitudinal lines, formed by bony plates, also the head is covered by analogous bony formations. The snout is more or less elongated. The ventral mouth is a transversally extending slit, or semi lunar, with fleshy lips and without teeth. Before the mouth, on the lower part of the snout, stand four barbs. The mouth is formed like a protractile proboscis; the is no sexual dimorphism between the two sexes, it were not for the different sizes in favour to males.

More specifically, in the Sturgeon (Acipenser sturio), there are 10-13 dorsal plates, with a central protuberance and spines in the young individuals; lateral plates in number of 24-40; ventral, 11-13. The snout is long half of the head, the mouth about the 2/3 of the width of the snout, protractile and almost quadrangular, round section barbs, not frayed, the lower lip is carved. 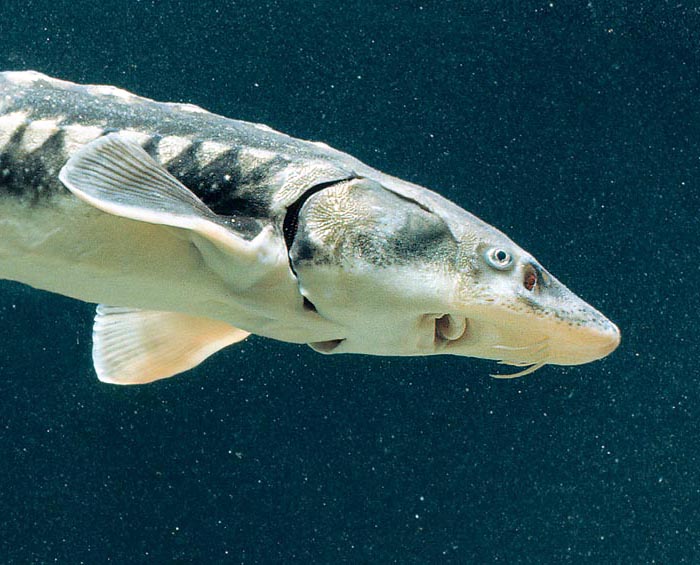 The back is of a grey-blue to greenish colour, the sides are silver-grey, the belly whitish; here the plates are paler. The pectoral fins have a robust ray. It reaches the length of 3 m (rarely 6 m) and weighs well more than 200 kg. In the wild, the males can live up to 60-65 years, the females up to 100-120 years!

Anadromous species. The ascent of the rivers happens in April-May and they reproduce in June-July. The reproduction is ectopic: which means that the females are fertilized by the sperms externally.

Once fecundated, they hatch after 3-5 days. For what concerns the stay of the young in the fresh waters, we have conflicting information: in the Eider and Elbe rivers (both rivers of Central Europe, the first starts in Germany, the second one in the Czech Republic), there are still several individuals at the first and second year of life, and also those of ½ – 1 kg of weight.

The smallest specimens, seized at sea, measure, averagely, 100 cm or more.During the reproductive period the fish does not stay much long in the river. In the Ladoga Lake (the greatest European lake, in the north-western European Russia, at the boundary with Finland, in the ‘oblast’ of Leningrad; ‘oblast’ is an administrative subdivision typical of Russia), there is a fresh water stationary form.

In terms of economic importance, we can by now say that in Western Europe this fish has become rather rare, as the huge shoals of sturgeons which could be observed by the end of the XIX century, have remarkably rarefied, due to the uncontrolled fishing to which they have been submitted, the industrial and urban pollution of the fresh and marine coastal waters, as well as for the hydro dams, etc.

In the Elbe region, in Sachsen, Germany, in 1890 they had seized 2.800 individuals, in 1918, 34 only, and presently only a few specimens do live in the fresh waters. The catches are still nowadays much frequent in the Black Sea, where this fish has still a remarkable importance in the local fishing industry. The vulnerability index of this species is of 88 over 100.