The jellyfish Acromitus flagellatus (Maas, 1903), Phylum Cnidaria, Class Scyphozoa, Order Rhizostomoidea, Suborder Inscapulatae, Family Catostylidae has been discovered by Otto Maas, a collaborator of Prince Albert I of Monaco, in the Malaysian Archipelago in 1903.

They are jellyfishes typical of the intertropical zones of Indo-Pacific, present from India to Japan.

All five species of the genus Acromitus are localized in coastal waters.

The umbrella is finely granular, whitish, speckled with brown on the edge and does not exceed the 20 cm of diameter. The 8 oral arms, pyramidal and short, are in subumbrellar position.

They are heavily pleated in the outer part with several oscula on the surface, oscula that correspond to micro mouths. These oral arms are wholly covered by quite numerous small filaments, hence the name given to the species, ending in one and long labial palp shaped like a flagellum. 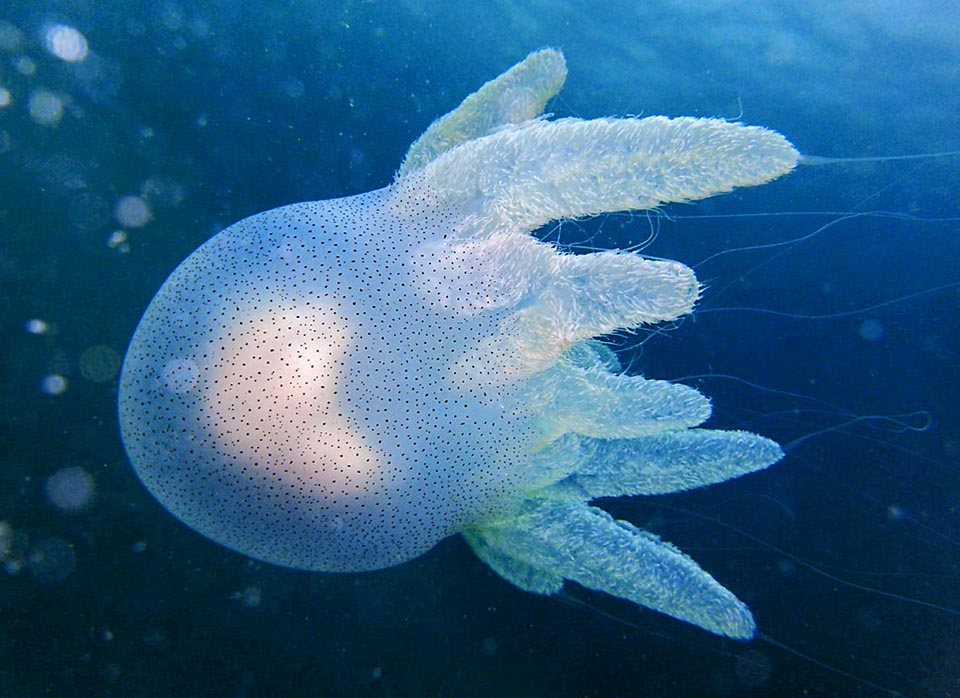 Acromitus flagellatus is a jellyfish of the intertropical Indo-Pacific zones that doesn’t exceed the 20 cm diametre. Its poison is harmless to humans © Gomen See

In the ectoderm of this buccal net are scattered the urticant cells or nematocysts, but their poison is harmless to humans.

The stomach is placed in the upper part of the umbrella where depart 8 radial canals anastomized in a dense radius of canaliculi. The edge of the umbrella is dark brown adorned by about 80 lobes with 8 subumbrellar very deep grooves where are lodged the sense organs, the rhopalia with ocelli and the statocysts. The myoepythelial cells are concentrated in a marginal muscular ring.

These microplanktophagous jellyfishes live in the coastal waters. Pretty listless in gait, they sail with very slow contraction movements. They bear the decrease of the salinity of the water due to monsoon rainfall episodes by sheltering in the lower strata. Shoals of fries of Caranx leptolepis often do escort these jellyfishes.

The gonads develop in a horseshoe shape around the stomach and the sexes are distinct. The reproductive cycle is unknown. Some very young jellyfishes are often mixed among the adult forms and this suggests that the polypoidal stage is located in the same area.