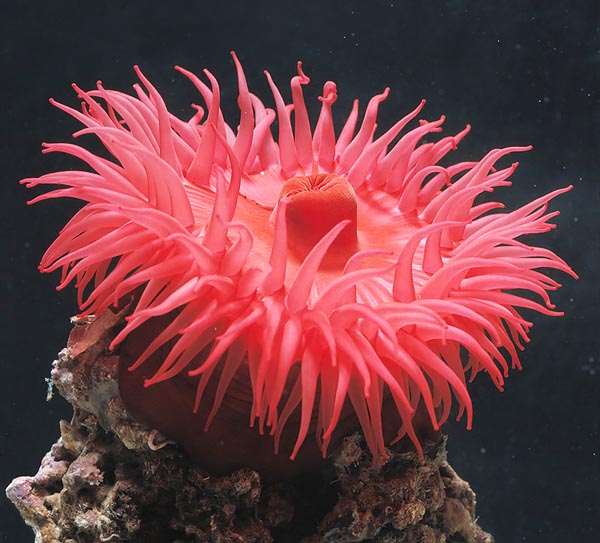 The Beadlet anemone (Actinia equina Linnaeus, 1758) is a splendid specimen of “sea anemone”, that is, actinia, of our waters.

The name anemone comes from the Greek “ánemos”, wind, flower of the wind. In the Greek mythology, it was the nymph who, pursued by the wind, was transformed in flower, and this is the case of these animals which, even if members of the Animal Kingdom, resemble to a flower.

For long, during the XVIII century, this resemblance puzzled the biologists, and in fact, initially, these last were convinced that they were flowers of marine plants, thing which later on turned out to be wrong.

This marine invertebrate, like the numerous species of actinias, or sea anemones, is afferent to the phylum Cnidaria, class Anthozoa, subclass Hexacorallia, order Actiniaria and family Actinidae.

The Actinia equina is defined sea tomato due to the bright red pigmentation of the body and the tentacles, which, when retracted, give it the shape of the fruit of this well known solanaceous plant.

It is distributed all over the Mediterranean and in the North Sea. The other species of sea anemones are distributed in the waters with not too rigid temperature; they love the rocky substrata. 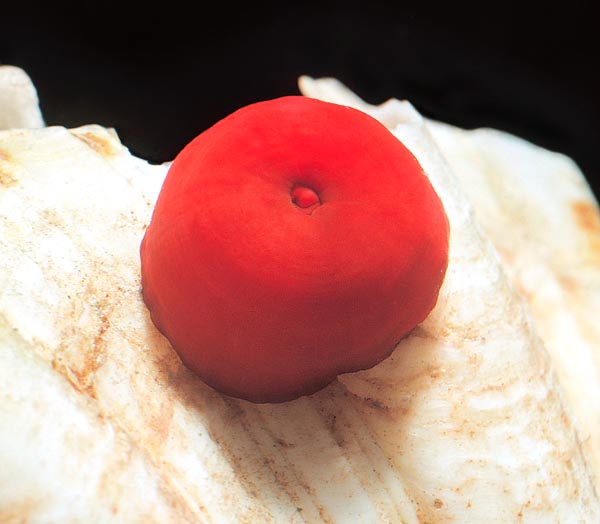 When digesting, with retracted tentacles, it seems, conversely, a tomato © Giuseppe Mazza

The beadlet anemone lives in the coastal region, where the coasts are rocky and indented, in little deep waters.

This species of anemones, as most of them, carries on a solitary life; till now, the biologists have identified only one species with an aggregate life.

It can survive out of the water, during the low tide, retracting the tentacles and stiffening the body in a roundish position.

These invertebrates nourish of small fishes and molluscs, which they seize with the “acontias” and the tentacles, eating them slowly, after having paralyzed them with their urticant organs.

The general morphological lines of the actinia indicate us that they have a cylindrical body ending, in the upper part, in an “oral disc” surrounded by a crown of mobile tentacles.

A basal disc allows the animal to fix on the substratum, a rock, for instance.

The tentacles, in a number multiple of six, are flexing outward ramifications, markedly pigmented. The original bilateral symmetry becomes then hexamerous or octamerous, due to a further complication in the internal structure of the body of the animal, caused by addition of particular formations. 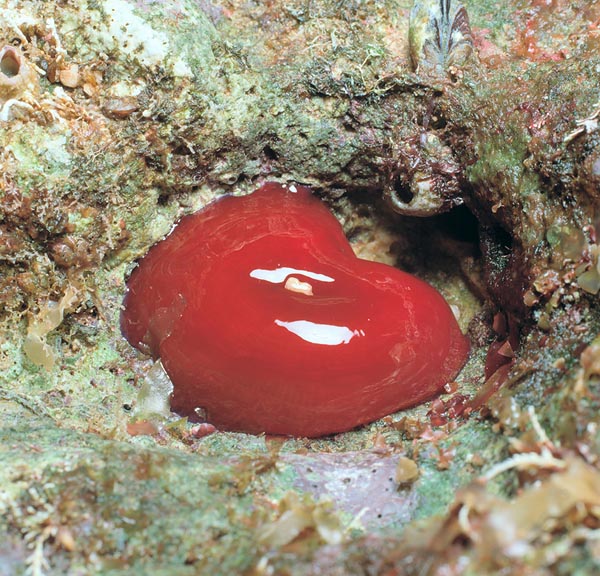 It can move, but once a good place is found will not leave it even at ebb tide © Giuseppe Mazza

As a matter of fact, the “gastro-vascular cavity”, or “coelenteron” is divided in six sectors by as many laminae of mesenteric nature.

At the level of the oral disc, is located the mouth, or “stomodeum”, formed by an intro-flexion of the ectodermal tissue.

In the stomodeum are dug a couple of ciliated chambers, called “siphonoglyphs”, which regulate the income of water into the gastro-vascular cavity.

The mesenteric septa may join in the portion over the stomodeum and in such case are defined as complete, even if in the lower portion, being narrower, they remain free.

On the walls of the complete septa are present some openings, the “ostia”, which allow the various cavities to communicate between them.

Along the walls of the body and along the septa, run longitudinal muscular fibres which, with their contraction, allow the shortening of the body and the retraction of the tentacles.

A circular musculature, placed around the mouth, allow a complete inwards bending to the tentacles. In this case, the body assumes the look of a swollen small sac or, rightly, that of a tomato.

The edges of the incomplete septa and the free ones of the complete septa, appear thickened by the presence of urticant cells, or “cnidoblasts”, of cells in charge of a primitive extracellular digestive function, and of the gonads. 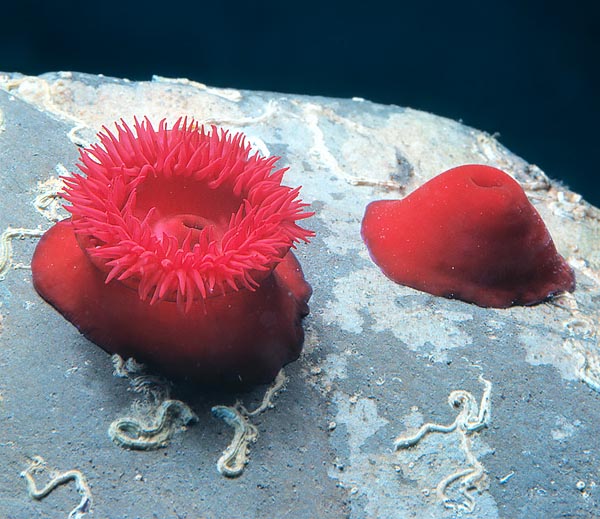 In the gastro-vascular cavity are also located the “acontias”, urticant filaments which may be projected out for defence, either through the mouth or through the numerous holes, the “cinclids”, scattered on the walls of the body. The cinclids are useful also for eliminating the food residues. Urticant cells are distributed along the tentacles forming the “perioral crown”.

The nervous apparatus is somewhat rudimental: it is formed by a network of nerve cells spread in all the body of the animal, particularly thick in correspondence of the mouth and the tentacles. True and proper sensory organs are absent in these animals, and therefore, also in the beadlet anemone; there are only sensory cells scattered around.

As we have seen, the actinias are carnivorous animals, as they nourish of small shrimps, small fishes and molluscs. Also the plankton is part of their diet; it is introduced with the water through the mouth and then passes through the siphonoglyphs. The bigger preys are, on the contrary, seized with the tentacles and the acontias, then paralyzed with the narcoleptic liquid contained into the urticant cells, then are introduced into the gastric cavity and here digested.

The motile cilia, placed around the mouth, can invert their movement, in a way to facilitate the introduction of the food as well as the expulsion of the wast products. A real and proper excretory apparatus is not present. There is no somatic sexual dimorphism between the two sexes; the dimensions vary from 3 to 9 centimetres. 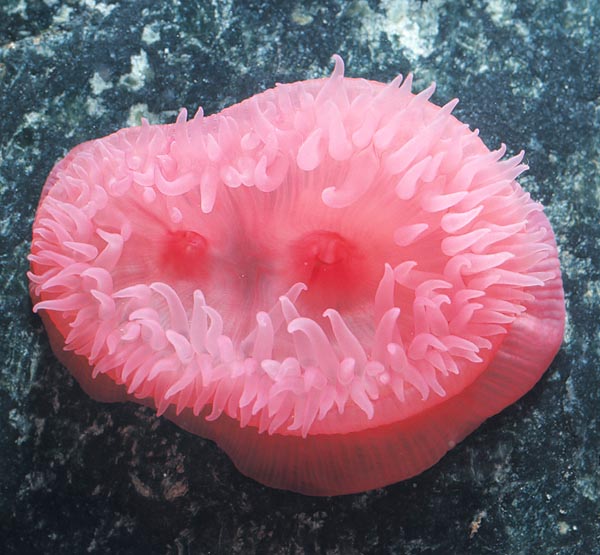 Although being stationary animals (that is, carrying on their whole vital cycle fixed in a substratum), the beadlet anemones and the actinias in general have a separate sexes reproduction, that is gonochoric.

The larvae, exited from the eggs, remain for some time into the gastro-vascular cavity of the mother. When a more advanced stage of maturity is attained, they go out and spend a short time floating in the water, and then will fix on a rock and will emit the tentacles.

It should also be noted that, even if the general rule remains the gonochoric reproduction, there may be, in particular circumstances the manifestation of rare instances of agamic reproduction by scission.

The major foe of the actinias, and therefore also of the Actinia equina is a mollusc of the genus Acolis, against which neither the paralyzing action of the urticant liquid, nor the immobilizing effect of the acontias and of the tentacles do have any success. The only chance the actinia involved has to defend itself is that of completely bend inwards the tentacles and contract all the musculature of the body, in way to get the roundish look, thus misleading the enemy and which, in any case, will expose the least body surface to its attack.

The IUCN declares a status of locally common for this species of sea anemone, which, however, may quickly turn to endangered species, as its survival is strictly connected, as well as all other marine organisms, animal and vegetal, to the status of health of the seas.