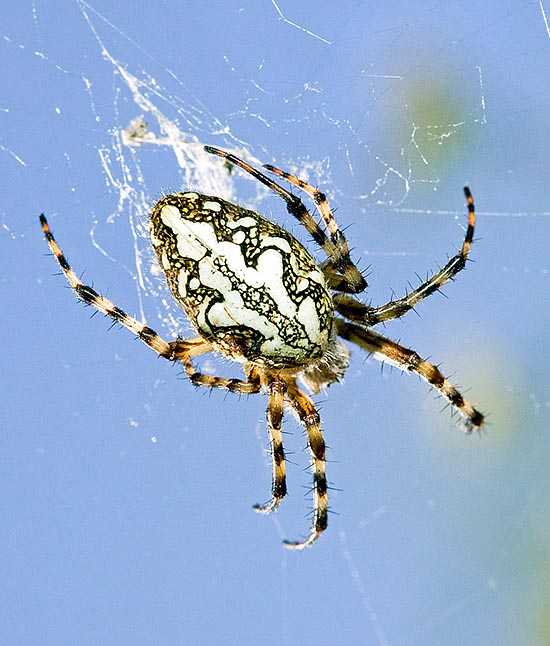 The Aculepeira ceropegia (Walckenaer, 1802) is an arachnid belonging to the family Araneidae.

In the past, these spiders were included in the genus Araneus, but the remarkable differences in the overall look and in the masculine palps have led to the definition of a separate genus.

The name of the genus Aculepeira comes from “aculeus” and “Epeira”, name of another spider, therefore, “aculeate Epeira”. Epeira come in its turn, from the Greek wordings “επι” (epi) = “over” and “ειρω” (eiro) = “thread, weaving”: so, “over the weaving”. The name of the species ceropegia comes from the Greek “κηρος” (keros) = “wax” and “πηγη” (pege) = “gush, source”, interpreted also as “candelabrum”, in reference to the shape of dorsal drawing.

Amply diffused in central-southern Europe, rarer northwards in the coldest regions. Absent in England except for some findings occurred by the end of the ‘800. In Italy it is common and locally abundant especially in the mountains up to the 2400 m of altitude.

It prefers open and sunny lands, in bushy ambient and with low vegetation. It builds the web near the ground, on bushes and herbaceous plants frequented by flying insects. The centre of the web is thickly covered by woolly white threads. The shelter, where the spider usually stays and takes refuge from the foes and the bad weather, is a concave structure thickly woven, also covered by white and thick threads. 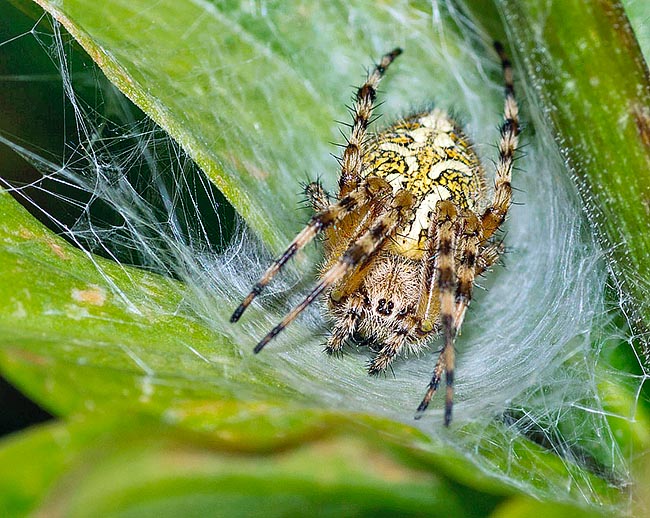 In case of danger it leaves itself to fall to the soil and has a concave cache, densely woven, to shelter from bad weather. The web is placed near the land, among the plants visited by flying insects © Giorgio Venturini

Often, however, the spider is at the centre of its web, in a well exposed position.

It is a highly sensitive animal and at the slightest disturbance leaves itself fall to the ground where it hides in the vegetation.

For getting back in its web, it uses a security thread already arranged in advance.

Like all members of Araneae order (with the exception of the families Uloboridae and Holarchaeidae) also the Aculepeira is endowed of venom glands and, through the bite of the chelicerae, can inoculate the poison into the prey.

The poison contains essentially neurotoxic proteins with paralyzing action acting on the ion channels responsible for the production of the electric potentials of the nervous cells.

When the prey remains trapped in the web, the spider comes, attracted by the vibrations, and with a bite paralyzes the prey.

This is immediately wrapped in a cocoon of silk and then the spider proceeds in inoculating the digestive enzymes which cause the liquefaction of the inner tissues, a predigestion allowing now the spider to suck its food. 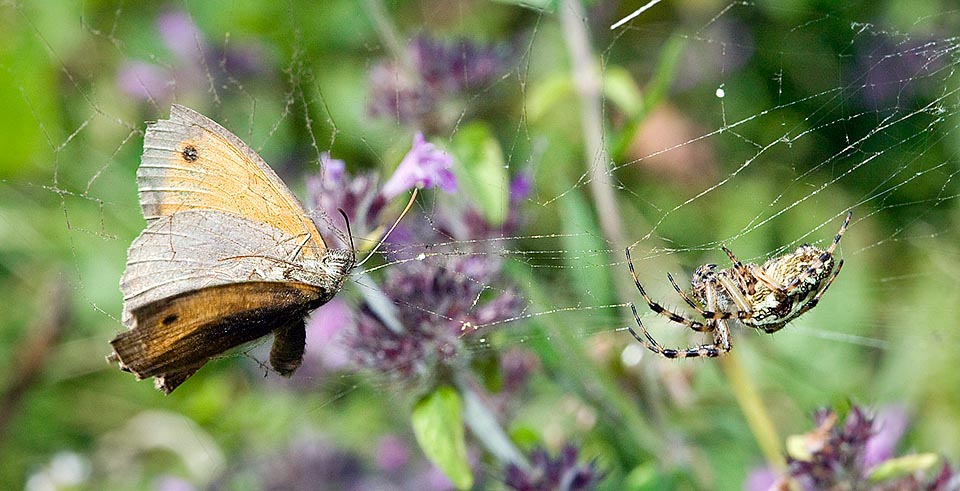 Though it eats insects for the 75%, like this ill-fated Maniola jurtina fallen in the trap, a quarter of the diet is formed by pollen, fungal spores and generally aeroplankton. These particles stick to the web threads and Aculepeira ceropegia eats them while recycling the web during the repairs © Giuseppe Mazza

Comparative studies have proved that the poison of the Aculepeira is relatively not too toxic (injected into the cockroach it causes paralysis but not death, even at high doses), if compared to that of spiders not building the webs. The most powerful poisons are usually those of mobile predators who, not trapping the prey in the web, need a lethal and very rapid poison. 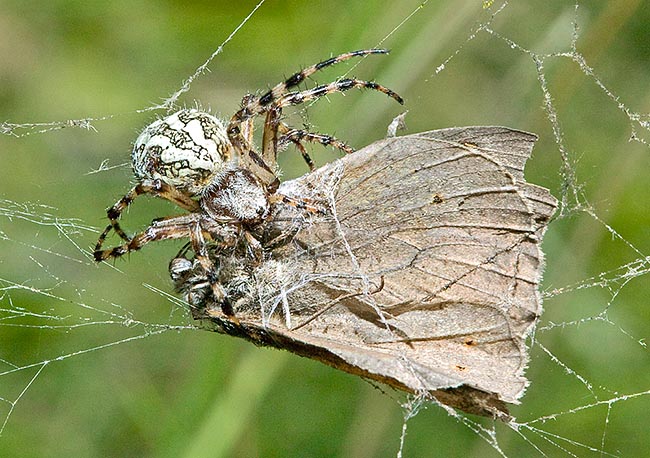 The spider comes quickly, alerted by the vibrations, and paralyses the prey with a bite © Giuseppe Mazza

The opisthosoma (abdomen) pointed in both extremities and the characteristic drawing render easy its identification.

The opisthosoma is relatively narrow and high, pointed on the rear and restricted also fore. The back extremity of the opisthosoma protrudes markedly beyond the spinnerets.

Ventrally, the opisthosoma presents pale and dark longitudinal bands before the spinnerets. Back to them often are visible some transversal striations.

The spinnerets, dark and protruding, are well evident. The prosoma (corresponding to the cephalothorax of other arthropods), relatively small, is covered by abundant hairs. The sternum is dark brown. 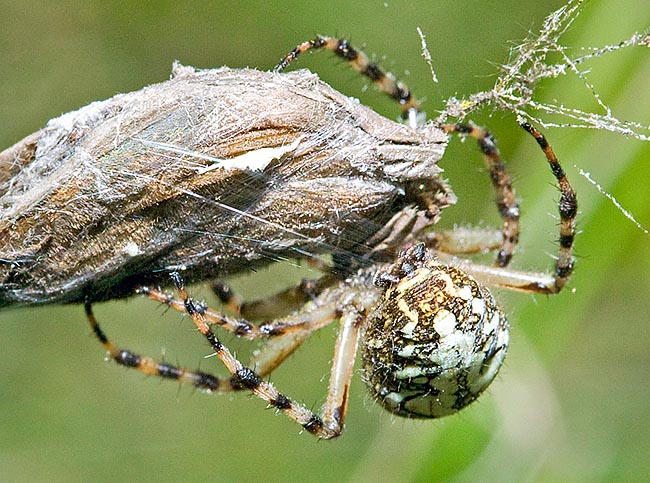 It s immediately wrapped in a silk cocoon and then the spider inoculates the digestive enzymes which cause the liquefying of the inner tissues, a predegestion that allows him to then suck the food © Giuseppe Mazza

Eight eyes, of which four are bigger, close together, are arranged quadrilaterally, and four, smaller, are placed in two pars more laterally.

The femurs have generally a relatively uniform brown-pale colouration, whilst the distal segments have an evident banding with pale-dark rings. The chelicerae are pale brown.

The legs are evidently spiny (hence the name Aculepeira), especially in the male.

The oak leaf drawing on the back is similar to that of another Araneid, the Neoscona adianta, which however distinguishes for the smaller size, the not pointed fore opisthosoma and the relatively bigger prosoma.

The spiders are commonly considered as predators with an exclusively carnivorous alimentation. Actually, alimentary resources of vegetal origin may represent important integrations. Recent studies (2013) have furnished interesting updates on the diet of these spiders (and perhaps also of others). 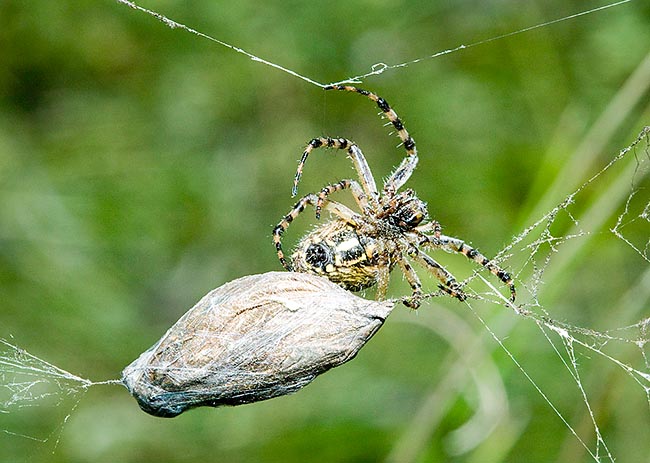 Mission accomplished: a food reserve for various days. Unlike the mobile predating spiders that use lethal and very fast poison, that of Aculepeira is little toxic: causes paralysis but not immediate death © Giuseppe Mazza

As a matter of fact, the webs, apart catching the insects, usual prey of the spider, trap also particles of aeroplankton such as fungic spores and pollens. When the spider ingests the thread, during the normal recycling or the web or during its repairs, it swallows also the pollinic granules or the spores seized which are pretreated by the extra-oral digestion.

The studies done through isotopic analysis on the Aculepeira ceropegia and the analogous Araneus diadematus have shown that the diet of these spiders consists for the 25% of pollen and for the 75% of insects (especially small dipterans and hymenopterans).

The dimensions of the pollinic granules studied resulted too big for having been ingested accidentally and required an active intervention of extra-oral digestion.

These studies that the spiders must be considered as omnivores rather than pure carnivores, how until now was usually thought. It is possible that this condition is common also to other species of arachnids builders of webs. It reaches the maturity in summer, with adult specimens usually found from May to July. The mating takes place in autumn and the cocoons with the eggs are placed in protected sites, such as the cracks in the trunk of the trees.