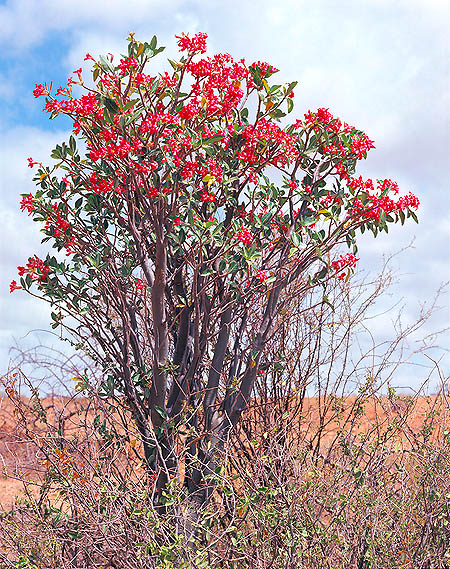 The Adenium obesum (Forssk.) Roem. & Schult. (1819) is native to the warmest and most arid areas of tropical Africa (Chad, Ethiopia, Guinea, Kenya, Somaliland, Mali, Niger, Nigeria, Senegal, Tanzania, Uganda) and to the Arab peninsula (Saudi Arabia, Oman, Yemen), where it lives in an ample variety of soils.

The name of the genus “adenium” is the Latinization of the local name “oddaejn” = of Aden and refers to the place where the plant was originally recovered.

Evergreen or semi-deciduous shrub or sapling, it can reach the 3 metres of height, or can keep low and semi-buried in the most arid areas, with a typical greyish swollen trunk, especially on the base, and tuberous roots which allow the plant to surmount long drought periods.

The leaves, united at the apex of the branches, are elliptic-obovate, glossy, of an intense green colour, long up to about 10 cm.

The flowers, united in terminal inflorescences, are tubular, of about 5 cm of length and a diameter up to about 7 cm, of colour from pink to red, with the margin of the petals usually of more intense colour and produced for a long time of the year.

The fruits are follicles in which interior are several long and thin seeds (about 10 x 1 mm), fluffy at the extremity in order to foster the anemophilous dispersion. It reproduces by seed and by cutting. 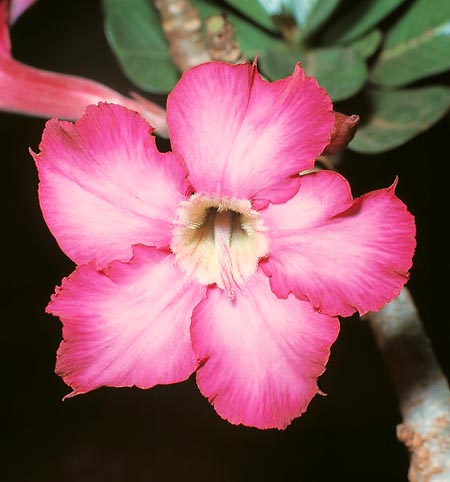 Plant of very high ornamental value thanks to the particular form of the trunk and the splendid blooming.

During the last decenniums the Adenium obesum has enormously increased its popularity far away from its origin countries, in particular in south-eastern Asia, where countless varieties have been selected, for shape and colour of the flowers. Cultivable in the tropical and subtropical areas, in full sun and in draining soils.

Elsewhere it is cultivated in pot, in order to be sheltered during the cold months, as it does not bear temperatures of even few degrees over zero, especially in connection with a high humidity of the substratum, which cause fatal rottenness.