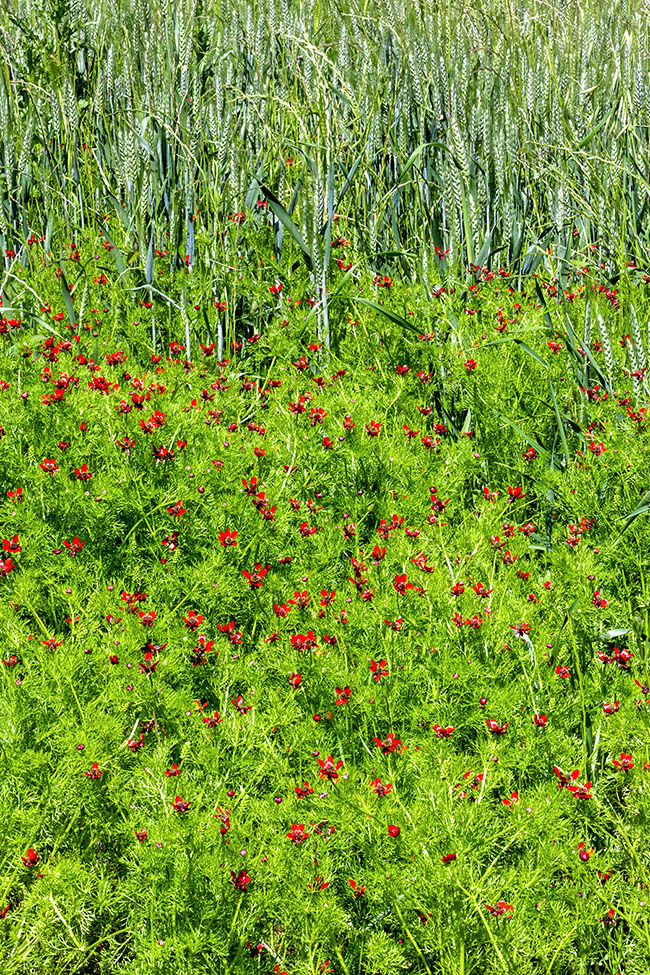 Adonis annua L. is a small herbaceous plant belonging to the family of the Ranunculaceae, one of the richest and most diversified in the temperate and cold regions of the northern hemisphere, where, at times, it may represent the dominant element of the vascular flora.

The species has been described by Linnaeus in 1753 inside his famous work Species Plantarum, considered as a fundamental starting point for modern botanical nomenclature.

The name of the genus comes from Adonis (in Greek Αδωνιϛ = Adonis), character of the Greek mythology, beautiful par excellence.

The myth tells that Aphrodite and Persephone had fallen in love with him, causing Zeus’ decision after which the young would accompany each one for four months and the remaining four as he preferred.

However, Adonis expressed his preference for Aphrodite even for the free months, causing Persephone’s anger who set on a wild boar against him. This one mortally wounded him and the leaked blood gave birth to these plants.

Conversely, the epithet of the species refers to the duration of its vegetative cycle.

The species is known under various local vernacular names, among which, for instance, Adonide annua (Italy), Fior d’Adone,

It is an annual, biennial at times, plant, 10-60 (70) cm tall, with single flowers between April and June, usually glabrous but some portions of stem and leaves.

The stem is erect, angular, ramified and with short glandular hairs in the lower side. The basal and the cauline leaves display some morphological differences. The first ones in fact are biller, equipped with a petiole, subdivided in segments having very thin and short laciniae, linear, mucronate. The cauline leaves are smaller, facing up, sessile and sparsely covered by little hairiness.

The flower, like most Ranunculaceae, displays some primitive characters from an evolutionary point of view.

As a matter of fact, the flowers are actinomorphic, that is, characterized by different plans of radiated symmetry. The corolla, consequently, is symmetrical with respect to a central point hence all the symmetry planes (more than 2) pass by this. The perianth is formed by two verticils, distinct in sepals and petals. 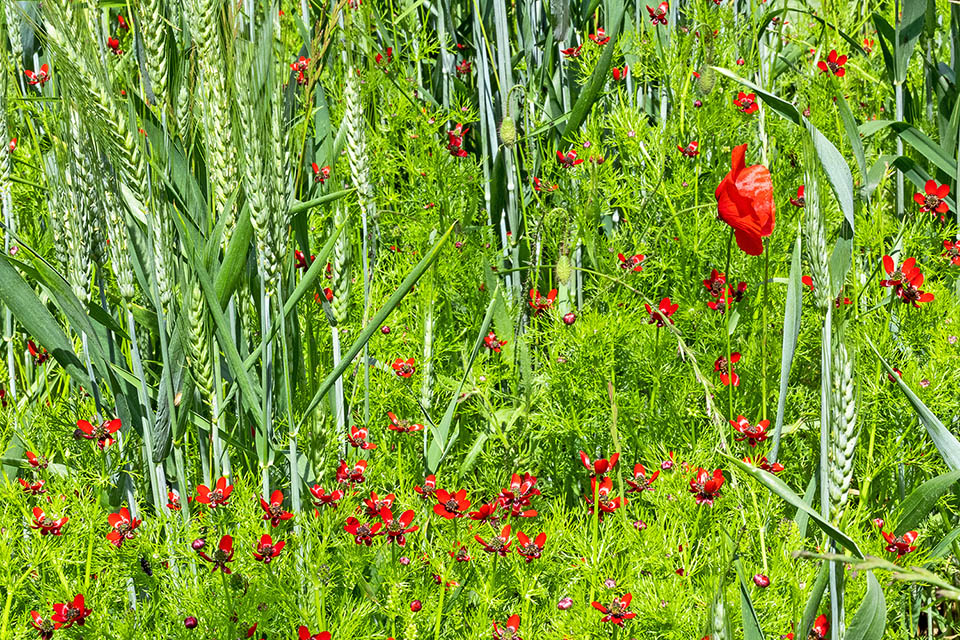 Menaced like the poppies by the herbicides and the selection of the seeds, it can still be found near them in the traditional cultivations like this small barley field © Giuseppe Mazza

The sepals are 5, of short duration, with variable pubescence, facing down, long about two thirds of the petals and with ovate-lanceolate or dub-rounded shape. The petals are 5-8(10) and form a concave corolla having a diametre of 15-3 mm. They have an intense red colour (often with a blackish spot at the base) and a lanceolate-spatulate shape, whilst the margin is entire or lightly incised at the apex. The androecium is formed by several stamens, short and spirally arranged, with free filaments and blackish anthers.

The fruit is an indehiscent polyachene coming from an ovary having many carpels. The infructescence forms a sort of spike that when ripe stretches out, coming to be constituted by single (3) 3,5-5,5 (6) mm pyriform achenes, with usually straight beak. Just the morphology of the fruit itself represents a diacritical character for the distinction from similar species, such as Adonis microcarpa DC. This last in fact differs only for the achene having the bump close to the beak and for the dark green or blackish beak in the point. 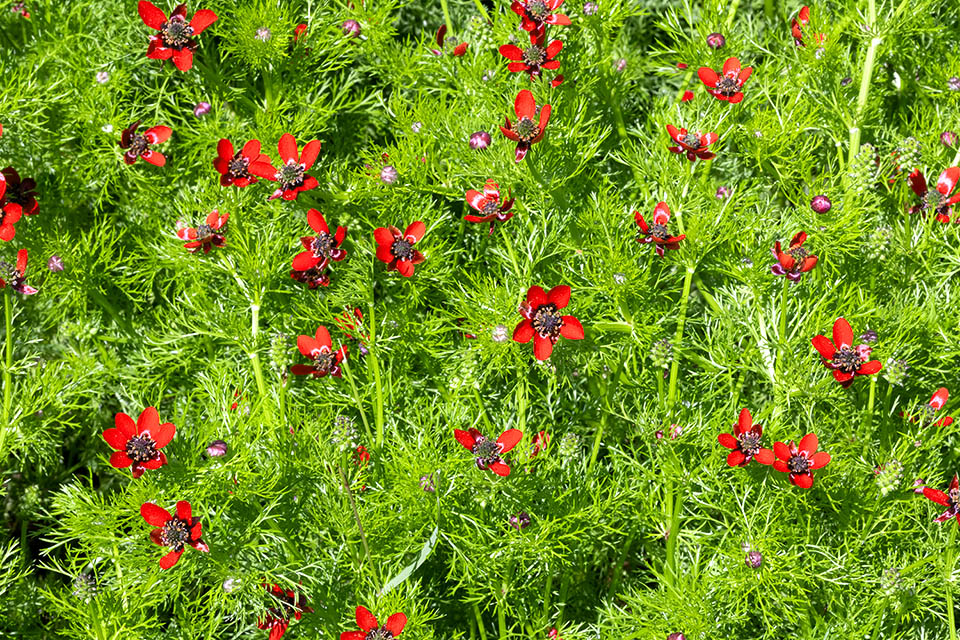 It is present in nature in the Euro-Mediterranean area up to 1500 m of altitude on clayey or chalky soils. Annual or biennial herbaceous, may reach the 70 cm of height © Giuseppe Mazza

In general, the most important characters of the achene for distinguishing the various species of the genus Adonis are: 1) the beak formed by the style, often concolour with the achene or also blackish (like in the case of Adonis microcarpa); 2) the crest that may be present or absent. It can be formed by a membranous or inconspicuous excrescence or at times by a continuous row of well evident superficial sculptures and present some teeth; 3) the dorsal tooth, usually formed by the crest or by a residue of the same; 4) the bump missing in some species that is an excrescence on the ventral side at about halfway through the achenium or higher. 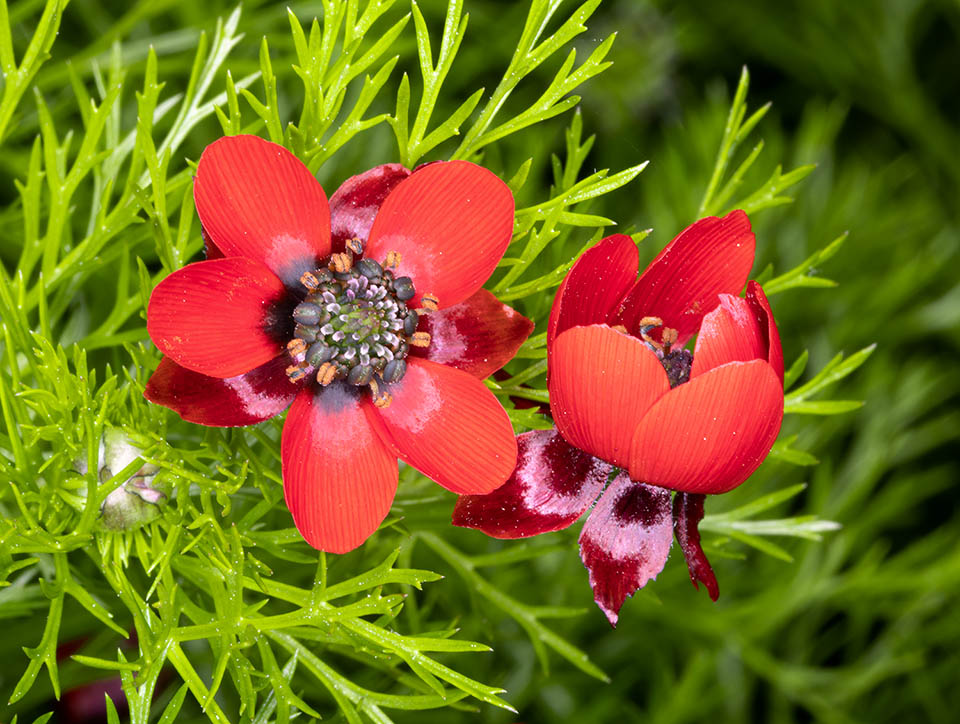 The flower, as red as Adonis blood for the Greek mythology, has 5 deciduous petals, facing down, and 5-8 petals forming a 15-30 mm broad concave corolla © Giuseppe Mazza

The subspecies type (subsp. annua) is characterized by glabrous sepals, 4,0-5,5 mm long achenes and by a sparse hairiness in the lower part of the stem. The subsp. cupaniana distinguishes for being completely glabrous and for the sepals having short hairs at the base. Finally, the subsp. castellana is hairy woolly also on top and presents sepals with long thin hairs in the lower part.

For what the overall distribution area of the species is concerned, this is very large over all the Euro-Mediterranean area, hence including western, southern and eastern Europe, North Africa and Middle East. In particular, the subsp. annua and cupaniana are present throughout much of the aforementioned area whilst the subsp. castellana is exclusive to Spain and France. 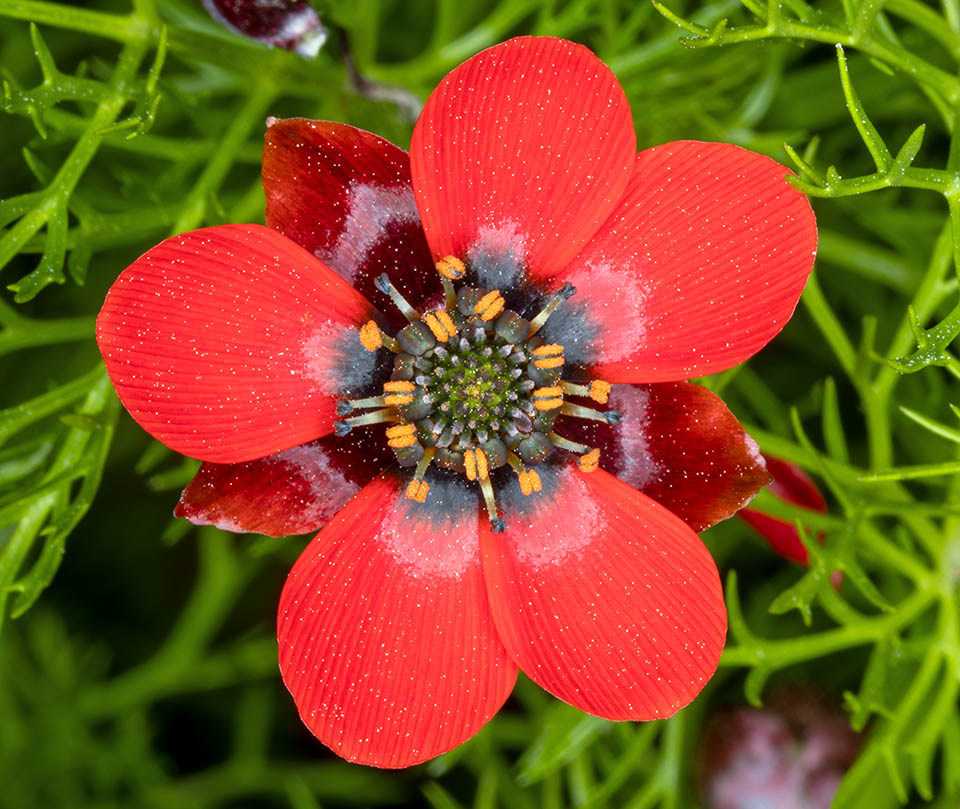 Beautiful but toxic for man and livestock, it’s a highly poisonous plant with active principles like the Digitalis ones with which is often associated in medicql applications © Giuseppe Mazza

The species is present in almost all Italian regions but is now rare and irregular. After several Authors it is a plant of ancient introduction that arrived together with the cereal cultivation (archaeophyte), just like the poppies. In fact, this species has followed the cultivation of the cereals since the origins: if once it characterized our agrarian landscape with its showy red blooms, has nowadays almost completely disappeared due to modern agricultural techniques.

The species colonizes open habitats often disturbed by anthropic activities, like uncultivated meadows and agricultural areas (particularly those utilized for the cultivation of cereals). 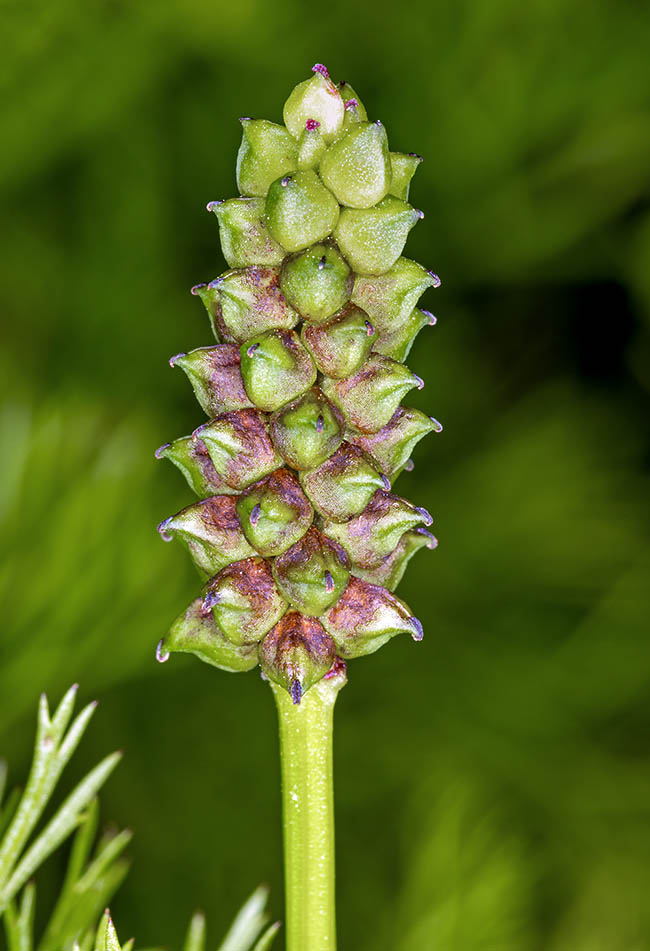 The infructescence forms a sort of ear and the characteristic shape of the fruit allows the distinction with similar species. The seeds can await even long time, into the soil, the most favourable moment for budding © Giuseppe Mazza

Its altitudinal interval goes from 0 to 1500 m and loves calcareous or chalky soils. Usually, the production of seeds is not particularly important, but contributes to the forming of a long-lasting seed bank in the soil.

Presently the plant is in regression especially in the cultivated fields due to the intensive agriculture and the indiscriminate use of the herbicides, bue also due to the selection of the cereal seeds.

From the phytosociological point of view, the species participates in plant communities reportable to the class Papaveretea rhoeadis, where are classified the annual cenospheres, infestant and heliophilous, that colonize the fields of cereals.

It is a toxic plant for man and for livestock, containing active substances like the adonite and the adonidin that render it highly poisonous.

Other chemical substances present are cardionelidi, such as cirnarina, adonitoxina, flavonoids, choline, phytosterol, resin, etc. Some of these active principles are utilized for central sedative action, tachycardia, extrasystole of nervous origin or as an antagonist of convulsive action caused by ingestion of cocaine or picrotonine.

On the while, the species is considered as like the Digitalis for its medical and with this it is often interspersed or associated. From the petals they extract the axtasanthin, an orange- red carotenoid containing 3 compounds (hydroxyechinenon, adonirubin and adonixantin).

The species is cultivated only rarely due to its small size and the short biological cycle. Usually it prefers alkaline soils, even clayey, but not too heavy, and very sunny exposures. It can be grown by seed, sowing in any moment from late summer to mid spring, even if, usually, an earlier sowing can be considered preferable.

→ To appreciate the biodiversity within RANUNCULACEAE family please click here.