The species is native to Brazil (Santa Catarina) where it grows epiphyte on the trees of the moist forest (Mata Atlântica) or on the rocks at the margins of the clearings, from the sea level up to about 900 m of altitude.

The generic name is the Greek substantive “αἰχμὴ” (aichmè) = spearhead, with reference to the spiny apices of the sepals and of the floral bracts; the specific name refers to the city of Blumenau, in the surroundings of which has been found the type species.

The Aechmea blumenavii Reitz (1952) is a species herbaceous evergreen, monocarpic, acaulescent, epyphitic or rupicolous, formed by an infundibuliform rosette of leaves forming a central cavity usually filled with water. Linear leaves with rounded apex, but provided with an about 2-6 mm long spine, and serrate margin, 30-70 cm long and 2,5-3,5 cm broad, of dark green color.

Floral scape at the center of the rosette, 40-45 cm long, of dark violet color sparsely covered by whitish tomentum, provided with thin ovate bracts with acuminate apex, whitish. The scape ends in a simple inflorescence, 10-12 cm long, with sub-verticillate sessile flowers, about 1,5 cm long, that open in succession from bottom to top. 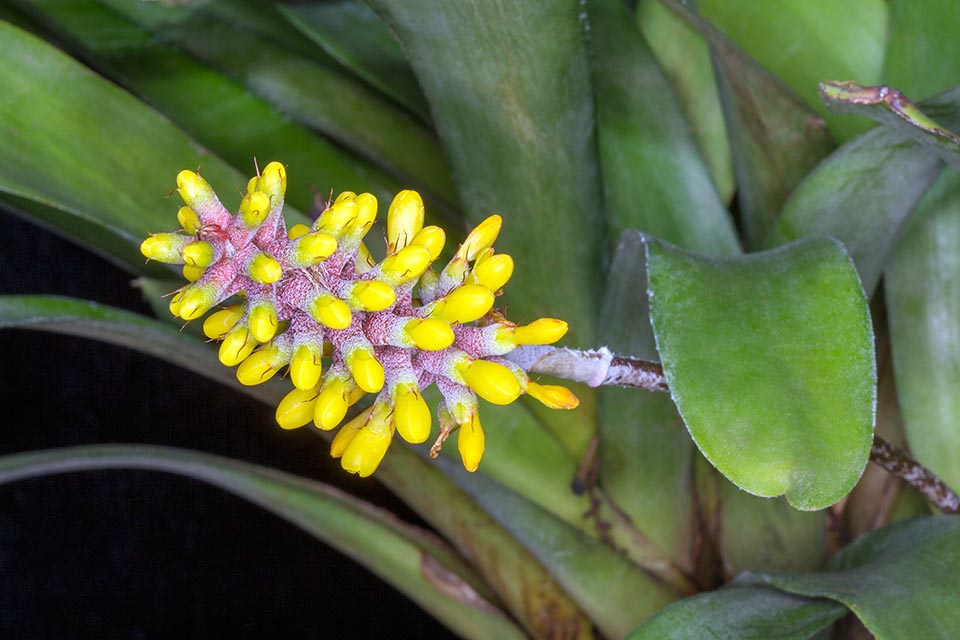 Epyphite or rupicolous, the Aechmea blumenavii is a monocarpic acaulescent species of Brazil. The imbutiform rosette of the leaves forms a central cavity that collects water © Giuseppe Mazza

Triangular floral bracts with acuminate apex, of pink color and sparsely covered by whitish tomentum, calyx with 3 sepals merged at the base per abour half of their length, mucronate, of pink or magenta color, they also covered by whitish tomentum, corolla with 3 free petals, spatulate with fimbriate apex, of yellow color, inferior ovary formed by three merged carpels and 6 stamina, in two series of 3, inside the corolla.

The fruits are ovoid berries of dark ping color, persistent for long, containing numerous seeds. Once the fructification is ended the plant dries up, but the process happens in rather long times during which it transfers nourishing substances to the young plants produced on the base.

It reproduces by seed, placed superficially on organic loam with addition of coarse siliceous sand per a 40-50 %, maintained constantly humid at the temperature of 24-26 °C, and easily in vegetative way, through the basal vegetations that can be taken off when they have reached a size at least equal to one third of that of the mother plant.

Species known for being one of the most resistant of the genus to the low temperatures, as it can stand, if dry, temperatures up to about -7 °C for short period. 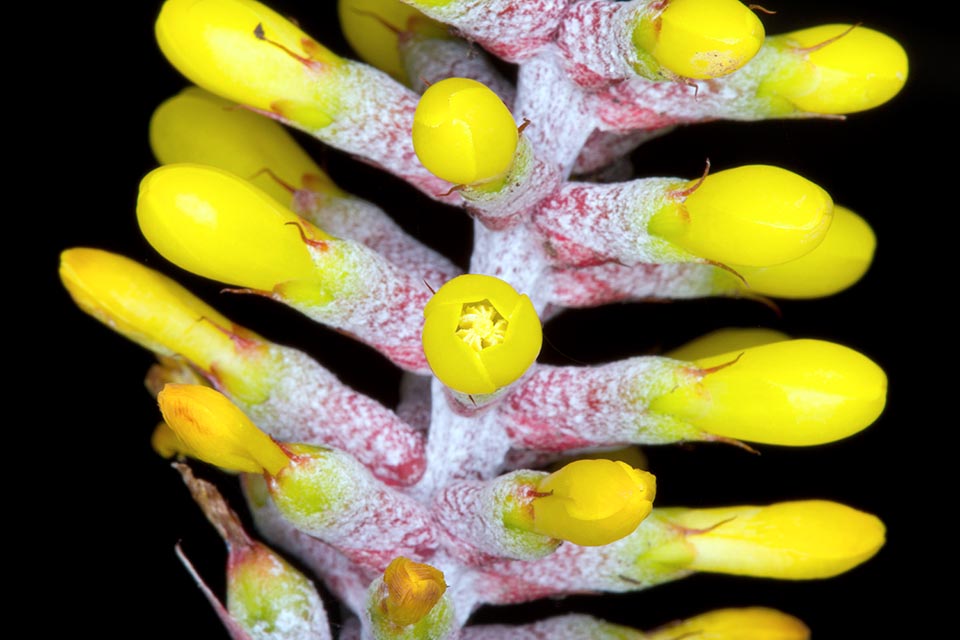 Close-up of the inflorescence. The fruits, not less decorative, are ovoid berries of dark pink color. Resistant to cold, it stands, for short periods, even -7 °C © Giuseppe Mazza

It grows in full sun as well as in partial shade and can stand drought periods being native to a zone with marked seasonality. Utilizable for borders, in mass and as soil cover in the tropical, subtropical and warm temperate climate regions, particularly suitable for desert-like type gardens, on soils draining and aerated rich of organic substance.

It adapts well to the cultivation in pot, for the decoration of open spaces as well as of luminous interiors, utilizing substrata having the above-mentioned characteristics, maintained constantly humid in summer, whilst in winter they must dry up almost completely between the watering. Any nebulization, in presence of dry air and high temperatures, are to be done with water at room temperature, non-calcareous in order to avoid unaesthetic spots on the leaves.

In summer it may be left some water into the central cavity formed by the rosette of the leaves, renewing it frequently to avoid it becomes a hot-bed for larvae of mosquitoes, whilst in winter, in presence of low temperatures, it is preferable to leave it almost dry thus to avoid possible rottenness.