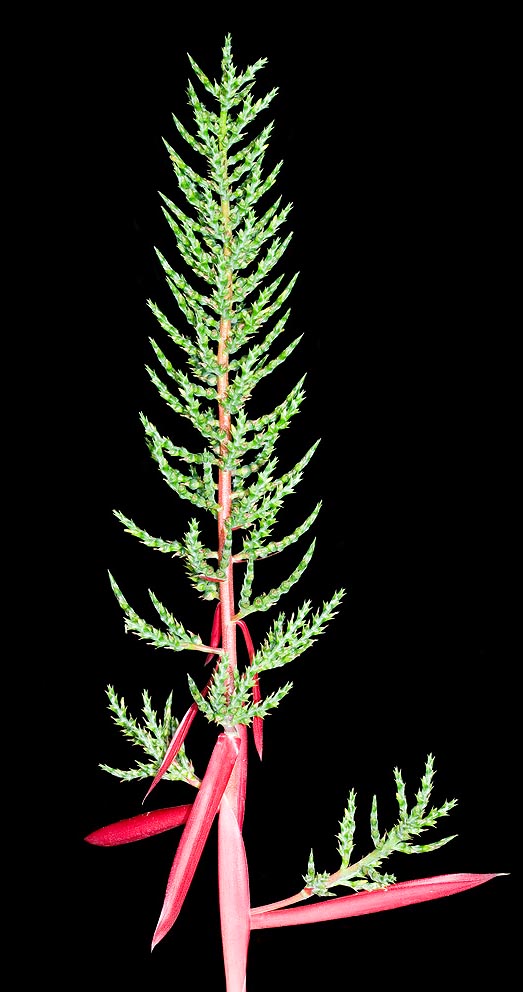 The name of the genus comes from the Greek “aichme” = spearhead, with reference to the thorny apices of the sepals and of the floral bracts; the name of the species is the Latin word “bracteata” = furnished of bracts, with obvious signification.

Evergreen herbaceous plant, monocarpic (bearing fruit only one time during its existence), acaulescent, epiphyte, it has a rosette of several leaves placed in way to form a central flask-shaped cavity, usually filled with water.

The leaves are linear, long even more than 1 m and 5-10 cm broad, of a pale green colour and covered by microscopic grey scales; the edges are provided with curved, 1 cm long, green thorns.

The inflorescence, at the centre of the rosette, is formed by a 0,5-1,5 m long floral scape, covered by a white tomentum at the base and furnished of lanceolate, unarmed, green on the upper side, intense pink or red below, bracts.

The scape ends with a long lasting, 40 to 90 cm tall, inflorescence formed by a compound raceme, that is, formed by several racemes departing from a central axis; the bracts under the single racemes, of the same colour of the terminal ones of the scape, are longer than the clusters of flowers in the lower part, up to about 15 cm, for then reducing progressively upwards to simple green scales.

The single racemes are formed by 6-14 flowers placed on two lines (distichous), with oval green bracts covered by a thin white tomentum, 5-10 mm long and provided with a thorn at the tip. The single flowers have 5 mm long, green, sharp, triangular sepals, whilst the petals are linear with rounded apex, 10 mm long and 5 mm broad, of a pale yellow colour.

The fruits are green globose berries tending to dark purple or black when ripe, 10 mm long and 5 mm broad, with an about 3 mm cone at the apex, formed by the residual of the sepals; the seeds are reddish brown, ovoid, curved, about 3 mm long.

It reproduces, besides by seed, by vegetative way through the new plants coming out at the base of the plant and which can be detached when they have reached a size equal to at least one third of the mother plant. Very robust plant, spread at the natural status where it has a remarkable importance for the microhabitat it offers to various species, like some arboreal frogs which take shelter there during the dry season. Since long time, it is cultivated in the tropical and humid subtropical climates as epiphyte on the trees, but also as terrestrial, to form edges and flower beds, in full sun or half shade.

Its cultivation can be tried also in warm temperate climates, in sheltered location, as it can stand for short time temperatures around the 0°C. It can be cultivated in pot, on very aerated, porous, draining and rich of organic substance substrata, for the decoration of spacious indoors, seen the dimensions and the presence of the robust thorns, verandas and winter-gardens, in a very luminous position, but not under direct sun, with temperatures which is good to keep over the 14-16°C, best 20-24°C. Watering must be abundant in summer and reduced in winter and the local humidity must be high, increased, if in presence of dry air and high temperatures, with nebulisations with water at room temperature and not calcareous in order to avoid anti-aestethic dots on the leaves. In summer, some water can be left in the central cavity formed by the rosette of leaves, renewing it frequently to avoid the formation of mosquito larvae nest, whilst in winter it is better to leave it dry for avoiding possible rottenness.

In the origin countries, the water contained in the rosette is utilized on the burns and in some rituals, like the “7 days bathe”, a ceremony where the seven days old newborns are watered together their mother. Furthermore, they get from the leaves robust fibres utilized for fabricating ropes and handicrafts, whilst from the fruits, crushed and soaked in water to ferment, they get a drink with the taste of pineapple.