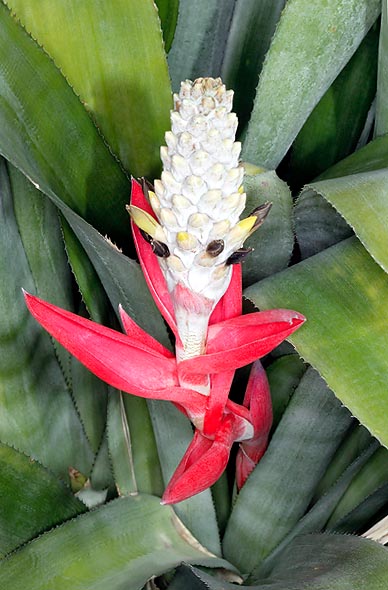 The floral scape is covered by a dense, white tomentum © Mazza

Evergreen herbaceous plant, monocarpic (bearing fruit only one time during its existence), acaulescent, epiphytic or litophytic, rather variable as dimensions and appearance, 60-90 cm tall, inflorescence included, it has a rosette, at times tubular, at times open, of rigid ribbon-like leaves with bent apex, 30-90 cm long and 4-9 cm broad, and with the margins furnished of brown thorns, long up to 1 cm.

The leaves are dark green and covered by small grey scales and form at the centre a cavity, usually full of water. The floral scape, at the centre of the rosette, is covered by a thick white tomentum and by lance-shaped pink to red bracts and end with a simple spike, long about 15 cm, cylindrical, thick, formed by the floral bracts, thick and coriaceous, covered by a thick, long lasting, white tomentum. The single flowers have 15 mm long, greenish yellow, petals, and ovary covered by a thick white tomentum, they are very short lasting and while becoming black contrast with the white bracts; the fruit is a sub-globose berry containing several seeds. Apart by seed, it reproduces by vegetative way through the new plants which come out from axillary gemmae between the leaves, which can be detached when they have reached a dimension equal to at least a third of that of the mother plant.

Very ornamental plant for its characteristic inflorescence, but rather “aggressive” due to its thorny margins, not much suitable, therefore, also due to its dimensions, for the cultivation in pot in spaces of limited dimensions. In open air, it can be cultivated in the tropical and humid or with marked seasonality subtropical zones, in full sun as well as in partial shade, on the trees as epiphytic or in rocky gardens and on reefs and rocks, being resistant to dry periods, to the wind and to the marine aerosols. The cultivation can be tried, in location sheltered by the winter rains, also in warm temperate zones, as it resists, just for a very short time, to temperatures of about -3°C.