The species is native to north-eastern Argentina (Misiones) and to southern Brazil (Rio Grande do Sul and Santa Catarina) where it grows epiphyte in the moist forests or on rocks covered by humus, up to about 1000 m of altitude.

The generic name is the Greek substantive “αἰχμὴ” (aichmè) = spearhead, with reference to the spiny apices of the sepals and of the floral bracts; the specific name is the latin name “calycatus, a, um” diminutive of “calyx, icis” = calyx, hence, endowed of a small calyx.

The Aechmea calyculata (É.Morren) Baker (1879) is a monocarpic, evergreen herbaceous species, acaulescent, epiphytic or rupicolous, about 60 cm tall, formed by a rosette of 8-12 nastriform leaves with rounded apex, provided with an up to about 0,5 cm spine, and slightly serrate margin.

The 30-60 cm long and 3-4,6 cm broad leaves, have an intense green color at times with a violaceous spot on the apex in presence of high luminosity. Erect floral scape at the center of the rosette, 30-40 cm long, sparsely covered by whitish tomentum, with various lanceolate membranous bracts, deciduous, shorter than the internodes.

The scape ends in a globose inflorescence, cylindrical or pyramidal, compact, 3,8-6,5 cm long and 3-4,5 cm broad, formed by 40-60 sessile flowers. Floral lanceolate bracts with acuminate apex and entire margin, of reddish color, calyx with 3 triangular sepals of yellowish green color, 0,4-0,5 cm long, united at the base for about half of their length, ending with a brown spine of the same length. Corolla with 3 free petals, 1,2-1,4 cm long, obovate with rounded apex, of bright yellow color, inferior ovary, about 0,4 cm long, formed by 3 merged carpels and 6 stamens, in two series of 3, inside the corolla.

The fruits are ovoid berries of reddish color when ripe containing several seeds. After the ripening of the fruits, the plant dies, but the desiccation occurs in long times, 1-2 years, during which it transfers the nutrients to the young plants produced at the base. 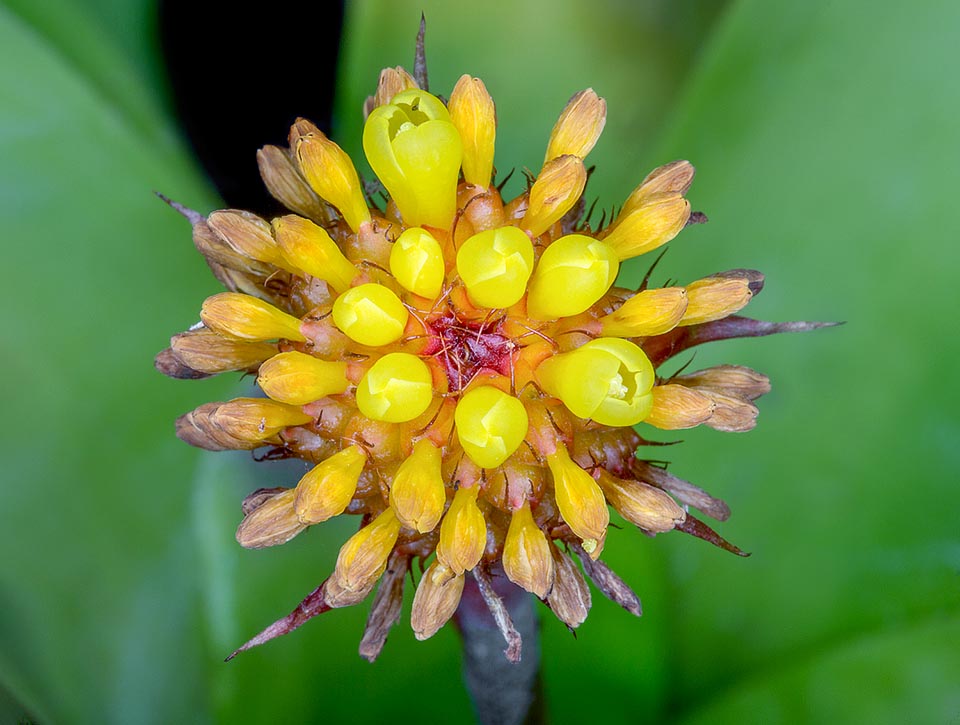 Epiphytic or rupicolous of Argentina and Brazil, the Aechmea calyculata is a monocarpic evergreen herbaceous species, about 60 cm tall, formed by a rosette of 8-12 nastriform leaves with spiny apex. The globose inflorescence, cylindrical or pyramidal, compact, 3,8-6,5 cm long and 3-4,5 cm broad, is formed by 40-60 sessile flowers © Giuseppe Mazza

It propagates by seed, put superficially on organic loam with addition of coarse silica sand per a 40-50 %, maintained constantly humid at the temperature of 24-26 °C. On amateur level it reproduces easily by division of the tufted plants or by the new basal vegetations, that may be detached when they have reached a dimension like that at least of a third of that of the mother plant, that will take 3-5 years for blooming in their turn.

Species with long lasting bright blooming, cultivable as epiphytic or as terrestrial, in the tropical, subtropical and warm temperate climate regions, where it can stand, dry, exceptional temperatures and of very short duration up to about -5 °C. It grows in filtered solar light as well as in partial shade and has proved to be, together with its hybrids and varieties, suitable for the cultivation in pot for the decoration of luminous inner spaces, utilizing an organic loam with addition of coarse silica sand per a 30-40 % for an excellent drainage. For an optimal growth, the winter temperatures should maintain over the 14-16 °C and he humidity around the 70-80 %, if lower we may use nebulizations in the morning with non-calcareous water at room temperature in order to avoid of staining the leaves.

Regular watering in summer, allowing the substratum to partially dry up before watering again, spaced in winter, but without ever leaving it to dry up completely. In summer some water is to be maintained in the central cavity formed by the rosette of the leaves, renewing it frequently thus to avoid that it becomes a hot-bed for mosquitos larvae, whilst in winter, especially in presence of low temperatures, it is better to leave it almost dry to avoid possible rottenness.