The species is native to Brazil (Pernambuco) where it lives in the moist forest (Mata Atlântica) at hilly altitudes.

The generic name is the Greek substantive “αἰχμὴ” (aichmè) = spearhead, with reference to the spiny apices of the sepals and of the floral bracts; the name of the species is the combination of the Greek substantive “κεφαλή” (kephalé) = head and of the suffix “-οειδής” (-oeidés), from “εἶδος“ (êidos) = shape, look, with reference to the globose shape of the inflorescence.

The Aechmea cephaloides J.A.Siqueira & Leme (2007) is an evergreen herbaceous species, monocarpic (it blooms only once and then dies), acaulescent, epiphytic or terrestrial, formed by an imbutiform rosette of leaves that form a central cavity where usually gathers the water. 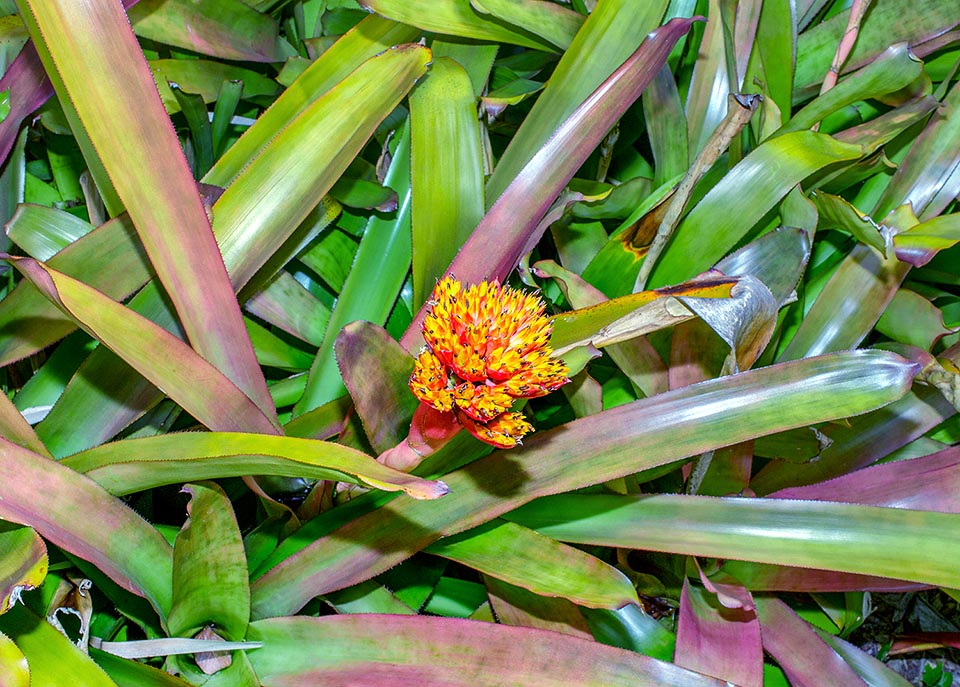 The Aechmea cephaloides is a monocarpic species native to Brazil, that is blooming only once and then dying, epiphyte or terrestrial, formed by an funnel-shaped rosette of leaves forming a central cavity where usually water gathers. The linear leaves have an intense green color but in full sun they get a pink to purple shade © Giuseppe Mazza

The leaves are linear with rounded apex, but equipped with a short spine, and serrate margin, densely covered by tiny whitish scales, of intense green colour; in full sun the leaves get a pink to purple shade.

Inflorescence, at the center of the rosette, formed by a robust floral scape shorter than the leaves, covered by a thick white tomentum and equipped with elliptic bracts with acute apex, longer than the internodes, overlapped, of pinkish color that intensifies from the bottom to the top. The scape ends in a long lasting globose inflorescence, formed by a compound raceme, that is formed by several racemes departing from a central axis, the racemes are formed by clusters of compact flowers subtended by big ovate bracts of red color with a spine at the apex. 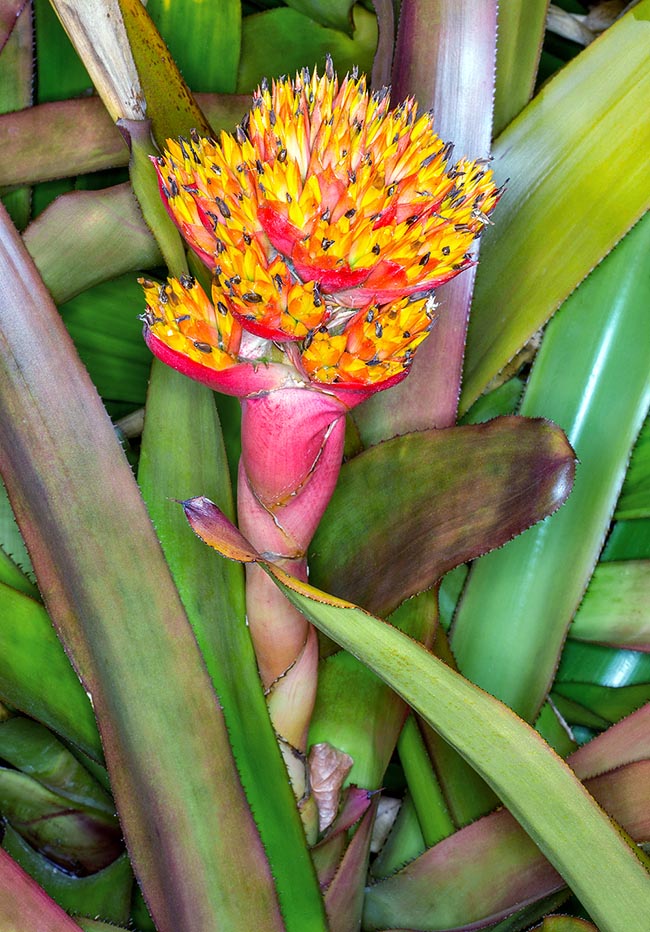 The long lasting globose inflorescence is formed by several racemes that depart from a central axis with clusters of compact flowers, yellow orange, subtended by big ovate bracts of red color with a spine at apex © Giuseppe Mazza

Once the ripening of the fruits is completed, the plant begins to dry, but the process takes long times, 1-2 years, during which it transfers nutrients to the new plants that produces at the base. It propagates by seed, placed superficially on a substratum that may be formed by organic loam and coarse silica sand, per a 40-50 %, maintained constantly humid at the temperature of 24-26 °C.

At amateur level it reproduces by division of tufted plants or through the new basal vegetation, that may be detached when they have reached a size at least equal to one third of that of the mother plant.

Species similar to the Aechmea aquilega, from which it differs for the globose inflorescence, the pedunculated flowers and color and dimensions of the floral parts. Of remarkably ornamental characteristics, it is cultivable in open air in the tropical and humid subtropical climates as well as epiphyte on the trees, as well as terrestrial, for flowerbeds and borders, on very aerated substrata, draining and rich of organic substance, in full sun, for a more intense coloration of the leaves, or in partial shade.

Cultivable also in pot, utilizing substrata with the same characteristics foreseen for the cultivation in external spaces, with lowest winter temperatures over the 15 °C.

In summer the substratum is to be maintained constantly humid, but without stagnations, slightly in winter, in way to allow the substratum to dry up almost completely between the watering; the local humidity, in presence of dry air and high temperatures, may be increased with nebulization in the morning utilizing water at local temperature and not calcareous in order to avoid antiesthetic spots on the leaves.

In summer some water must be left in the central cavity formed by the rosette of the leaves, renewing it frequently to avoid it becomes a larval hot-bed of mosquitoes, whilst in winter, in presence of low temperatures, it is better to leave it almost dry to avoid possible rottenness.