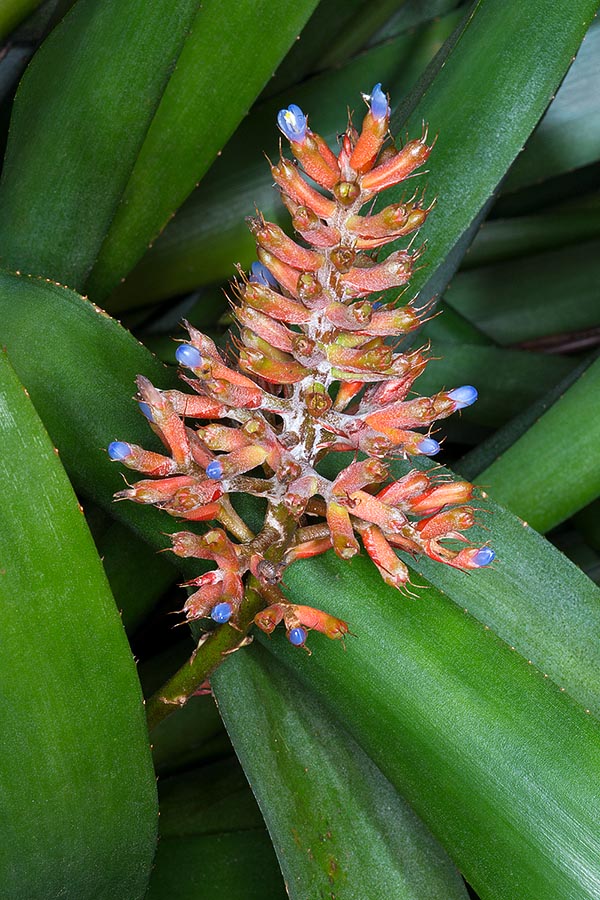 Native to Brazil, the Aechmea coelestis stand among the most known of the genus © Giuseppe Mazza

The species is native to Brazil (Espírito Santo, Paraná, Rio de Janeiro and São Paulo) where it lives in the coastal pluvial forest (Mata Atlantica) up to about 1500 m of altitude.

Inflorescence, at the centre of the rosette, formed by a floral erect scape ending in a compound spike, that is formed by more spikes that depart from the central axis, 7-15 cm long. Dark green scape, 16-50 cm long, covered by white down and provided of lanceolate bracts, thin, with pointed apex and entire margin, of pale pink colour.

The single spikes, up to about 4 cm long, present at the base a bract, more or less of the same length, similar to those of the scape, and bear numerous flowers, 2-2,2 cm long, in turn provided at the base of an ovate bract with long pointed apex, 1-1,5 cm long and 0,3-0,5 cm broad, of reddish brown colour and covered by white down.

Flowers with three triangular sepals, 4-6 mm long and 2-3 mm 3-5 broad, of pale pink to intense pink colour and covered by whitish down, ending in a 3-5 mm long spine, 3 spatulate petals of sky blue colour, 1-1,6 cm long and about 0,3 cm broad, and inferior trilocular ovary, almost cylindrical, about 0,9 cm long, of the same colour as the sepals. The fruits are blackish berries when ripe, persistent for long time. Besides by seed, it reproduces in vegetative way through the new plants generating at the base and that can be detached when they have reached a size of at least a third of that of the mother plant.

Species among the most known of the genus for the inflorescences and infructescences of long duration and easy to cultivate, utilizable in the tropical, subtropical and marginally temperate-warm climate regions, where temperatures around the 0 °C are short lasting exceptions, as epiphytic as well as terrestrial, for borders or as ground cover, in particularly draining substrata, in full sun as well as in partial shade. 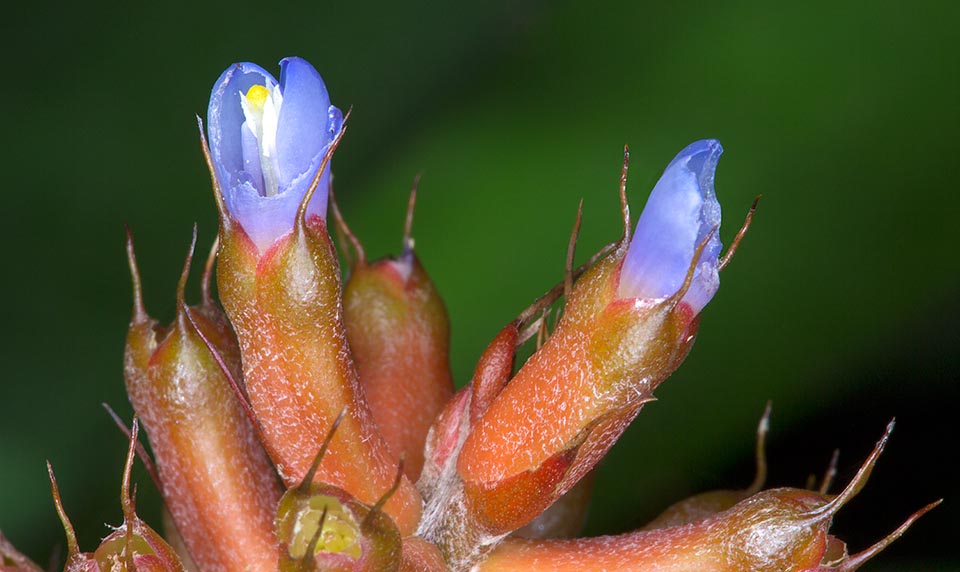 The sky blue flowers are at the origin of the specific name. Easy to cultivate, also in pot, with long lasting inflorescences and infructescences © Giuseppe Mazza

It well adapts to the cultivation in pot, on very aerated substrata, porous, draining and rich of organic substance, for the decoration of verandahs, winter gardens and luminous inner spaces, with temperatures preferably over the 16 °C.

In summer the waterings must be regular so to maintain the substratum always slightly humid and the ambient humidity, in presence of dry air and high temperatures, can be eventually incremented with nebulizations utilizing water at ambient temperature and not calcareous to avoid unaesthetic spots on the leaves; in winter the waterings are to be spaced in order to allow the substratum to dry up almost completely. In summer some water can be left in the central cavity formed by the rosette of leaves, renewing it frequently to avoid it becomes a larval hotbed of mosquitoes, whilst in winter, in little ventilated spaces and in presence of rather low temperatures, it is preferable to leave it dry in order to avoid possible rottenness.

→ To appreciate the biodiversity within the family BROMELIACEAE family please click here.