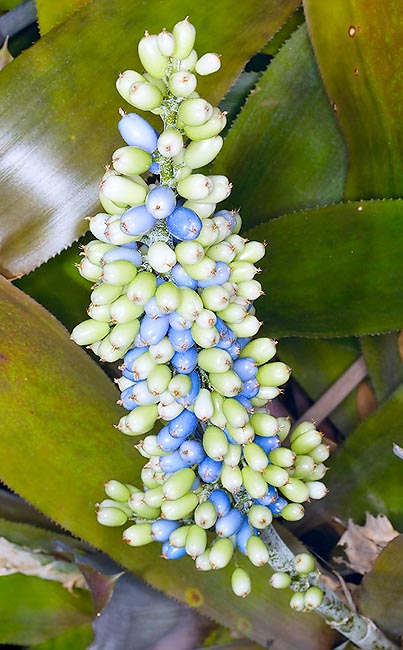 The Aechmea mexicana Baker (1879) is native to tropical America (Belize, Colombia, Costa Rica, Ecuador, Guatemala, Mexico, Nicaragua and Panama), where it grows in the humid forests up to 1300 m of altitude.

The name of the genus comes from the Greek “aichme” = spearhead, with reference to the thorny apices of the sepal and of the floral bracts; the species name “mexicana” = of Mexico, refers to the place where the plant has been found for the first time.

Evergreen herbaceous plant, monocarpic (bearing fruit only one time during its existence), acaulescent, epiphytic, it has a thick, funnel-shaped rosette, broad even more than 1 m of diameter, of several leaves placed in way to form a central cavity usually full of water. The leaves are linear, 0,5-1,2 m long and 6-9 cm broad, of a pale green colour, with diffused and irregular darker dots and the lower part covered by grey, microscopic scales; the margins are equipped with about 2 mm long thorns and the tip of the leaf, sharp or rounded, has a terminal thorn. When in full sun, the leaves, particularly towards the extremity, acquire a pink to orange tonality.

The inflorescence, at the centre of the rosette, is formed by a robust floral scape, having a diameter of 2-3 cm and a length of 30-50 cm, covered by grey, microscopic scales and furnished of lanceolate, sharp, cream-white to pink bracts, long up to about 20 cm, of which the upper ones are folded on themselves. The scape ends in a 30-60 cm long inflorescence, formed by a compound raceme, that is, formed by several racemes departing from a central axis; the racemes contain from 5 to 10 sparse flowers on thin, 4-12 mm long, peduncles. The bracts under the single racemes are lanceolate and of pink colour, whilst those of the single flowers are filiform and much shorter than the floral peduncle. The sepals are oval, about 5 mm long, with thorny apex and 10-15 mm long and 5 mm broad petals, which are red or lilac; sepals, axes and floral peduncles are thickly covered by small whitish scales.

The fruits, which last for long time on the plant, are white capsules initially covered by small grey scales with bluish tones which then fall leaving the surface glossy and pearly. It reproduces, besides by seed, by vegetative way through the new plants which come out at the base and which can be detached when they have reached a dimension of one third of the mother plant. Imposing plant, one of the biggest between the Aechmea, and of great ornamental value, both for the foliage and for the long lasting inflorescence, it is cultivable in open air in the tropical and humid subtropical zones, being rather sensitive to the low temperatures, as a matter of fact there can be damages to the leaves already with temperatures around the 0 °C. It can be utilized as epiphytic on the trees, in particular on the lower branches as in the wild, but also as terrestrial, isolated or in mixed edges and flower-beds, on very aerated, porous, draining and rich of organic substance, substrata, in full sun; it can stand a slight shade, but in this case the leaves will not get the characteristic orange pink tone.

Elsewhere, it is to be cultivated in pot on substrata having the same characteristics foreseen for the external cultivation, to be utilized in ample spaces, seen its dimensions, and very luminous, with temperatures over the 14-16°C, best 20-22 °C. The substratum must be kept constantly humid in summer, slightly in winter, allowing the same to dry up between the watering, and the local humidity, in presence of dry air and high temperatures, can be increased with nebulisations utilizing water at room temperature and not calcareous for avoiding anti-aestethic dots on the leaves. In summer, some water can be left in the central cavity formed by the rosette of leaves, renewing it frequently in order to avoid that it becomes a nest of mosquito larvae, whilst in winter it is better to leave it dry for avoiding possible rottenness.