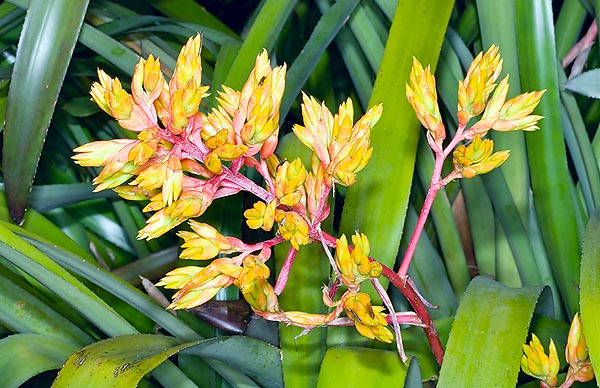 The name of the genus comes from the Greek “aichme” = spearhead, with reference to the thorny apices of the sepals and of the floral bracts; the Latin name of the species “rubens” = reddish, refers to the colour of the bracts and of the axis of the inflorescence which, time passing, becomes even more orange-red.

Evergreen herbaceous plant, monocarpic (bearing fruit only one time during its existence), acaulescent, epiphytic, it has a funnel-shaped rosette of rather rigid and ascending leaves, placed in way to form a central cavity usually full of water.

The leaves, long about 60 cm and up to 12 cm broad, with rounded apex and equipped with a thorn, are of a pale green colour with microscopic greyish scales which, on the back, assume, towards the base, reddish tones; the margins are furnished of rather thick, brown, thorns, long about 3 mm. The inflorescence, at the centre of the rosette, is formed by a floral scape provided with imbricate, elliptic bracts, covered by microscopic clear scales. The scape ends with a long lasting inflorescence, 40-50 cm tall, formed by a compound raceme, that is, formed by several racemes departing from a central axis.

The bracts under the single racemes are shorter than the same and of a pink colour, the floral ones, about 3 cm long, ovate and sharp on the apex, are of an intense pink colour with yellow margins in the outer flowers, pale pink in the inner ones; the sepals, 2 cm long, are orange yellow, as well as the petals. Whilst the flowers are ephemeral, floral axis, bracts and sepals last 5-6 months, becoming, time passing, of an intense orange-red colour. It reproduces, besides by seed, by vegetative way through the new plants which come out at the base of the plant, and which can be detached when they have reached a size of at least one third of the mother plant. The cultivation in open air is limited to the tropical and humid subtropical climate zones, being rather sensitive to the low temperatures, and in fact it can get clear damages to the foliage even with temperatures just over the 0°C.

It can be utilized as epiphytic on the trees, but also as terrestrial, to form edges and flower beds, on much aerated, porous, draining and rich of organic substance substrata, in full sun or slight shade. Elsewhere, it is to be cultivated in pot on substrata with the same foreseen characteristics for outdoor cultivation, with temperatures over the 14-16°C, best around 20-22°C. The substratum must be kept constantly humid in summer, slightly in winter, allowing the substratum to dry up between the watering, and the ambient humidity, in presence of dry air and high temperatures, can be increased with nebulisations, utilizing water at room temperature, and not calcareous, in order to avoid anti-aestethic dots on the leaves. In summer, some water can be left on the central cavity formed by the rosette of leaves, renewing it frequently to avoid that it becomes a nest of mosquito larvae, whilst in winter it is better to leave it dry for avoiding possible rottenness.