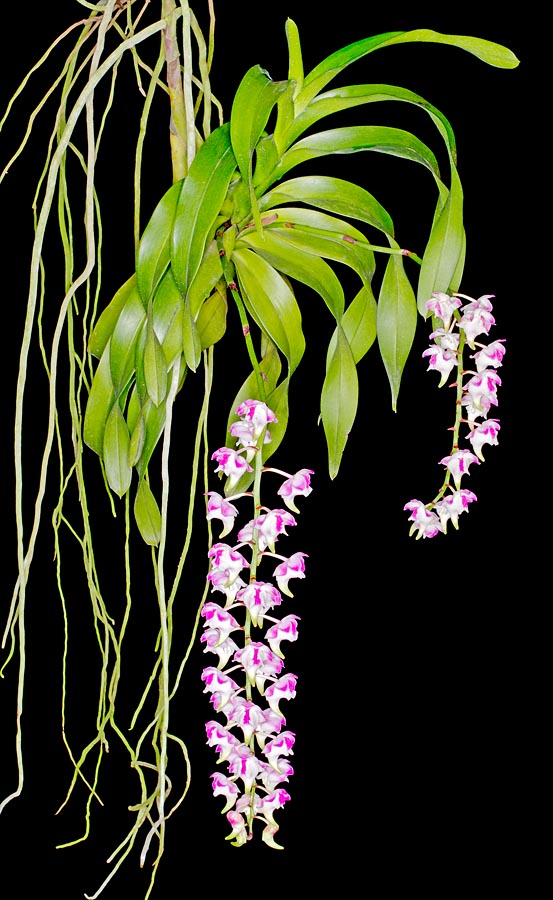 The species is native to the Philippines, in particular, to the islands Mindanao and Leyte, where it grows epiphytic in the pluvial forests on the most exposed branches, in way to receive the maximum possible light, from the sea level up to about 500 m of altitude.

The name of the genus is the combination of the Greek terms “ἀήρ” (aer) = air and “εἶδος” (eidos) = shape, look, with reference to the epiphytic behaviour of the plants; the species is honoured to Lady Lawrence, wife of the president of the British Royal Horticultural Society at the time of its description.

The Aerides lawrenceae Rchb.f. (1883) is an epiphytic monopodial species with erect stems, semipendent in the old plants, up to more than 1 m long, and alternate distichous, linear, coriaceous, curved leaves, with irregularly bilobed apex, up to 30 cm long and 5 cm broad, of intense green colour.

Lateral, racemose inflorescences, drooping, 30-50 cm long, carrying up to more than 30 flowers of about 4 cm of diameter, having white sepals and petals with purple apex and white labellum with purple median lobe.

It reproduces by seed, in vitro, and micropropagation; at an amateur level it may be reproduced by the vegetative restart cutting the stem in such a point that the upper part and the lower one are provided with leaves and numerous aerial roots.

The cut part is to be put in a pot with medium sliced bark, in an environment with high atmospheric humidity and temperature, 24-28 °C; the basal part will produce new vegetation from a dormant bud.

It is one of the most cultivated and appreciated species of the genus due to the long-lasting flowers, produced in summer-autumn, waxy and intensely perfumed; it is frequently utilized in the hybridizations. 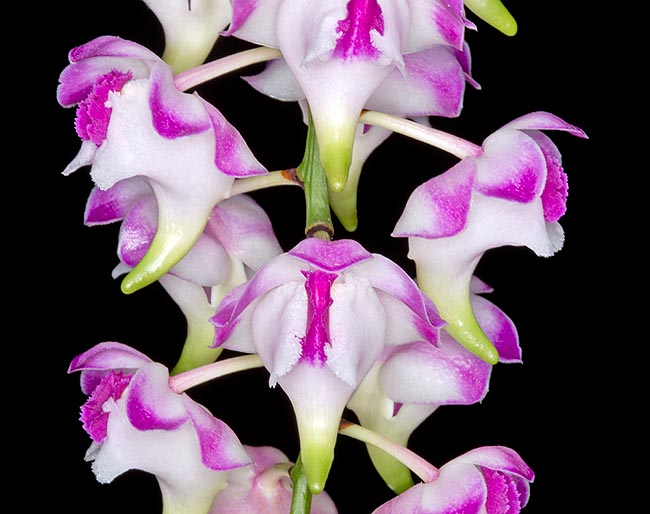 The highly perfumed waxy flowers are long-lasting and form columns with even 30 elements of about 4 cm of diametre. It stands among the most appreciated species of the genus, easy to till and many hybrids mother © Giuseppe Mazza

The waterings must be regular and abundant during the growth period, with frequent nebulisations to the roots, somewhat reduced in winter, avoiding water stagnations at the axil of the new leaves to avoid easy rottenness.

Watering and nebulisations are to be done using rainwater, demineralised or by reverse osmosis; for the fertilizations, at intervals of 1-2 weeks during the growth period, it is advisable the use of hydrosoluble balanced products, with microelements, at ¼ of the dosage suggested by the producer on the package.

It is to be cultivated preferably in suspended baskets, to allow the robust roots to freely elongate, with aerated and particularly draining compost that can be formed by large-sized bark fragments.

The repottings are to be done when strictly necessary, by the vegetatve restart, trying to not too much disturb the roots.