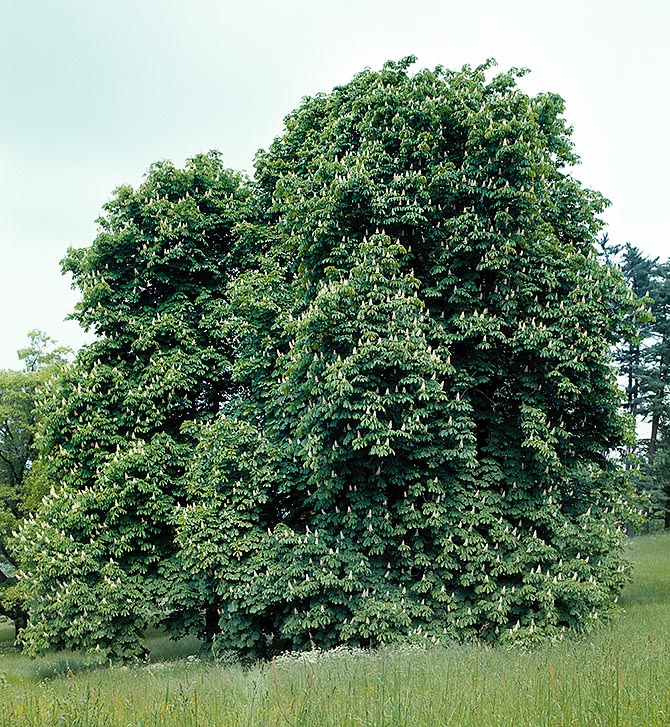 If alone and not pruned, Aesculus hippocastanum can be 30 m tall with 3 m broad trunk © Giuseppe Mazza

Aesculus is a Latin name of a type of oak sacred to Jupiter cited by the Romans and therefore attributed by Linnaeus to this species, even if, as he well did know, included in a family well distinct from those of the Fagaceae. After some Authors, it should get its origin from the Latin “escare” = to eat, due to the fruits eaten by some animals (especially sheep and goats).

The name of the species hippocastanum, comes from the two Greek terms “hìppos” = horse and “kástanon” = chestnut (chestnut tree or horse chestnut) in reference to the fact that the Turks used the seeds, rich in starch, for feeding the horses suffering from broken-wind and for stimulating them.

The genus Aesculus includes, after various Authors, 20-25 species of the temperate regions of the Boreal Hemisphere, in particular Boreal America.

The original home range of the horse-chestnut is located in the south-eastern European-Illyrian region (Balkans). It was introduced in Central Europe and in Italy in 1557 by the famous Sienese botanist Matthiolus, who got its seeds from Constantinople.

Despite its vulgar name of “Indian Chestnut”, in its natural habitat (Greece, Bulgaria,Albania) it forms mixed woods with ash, alder and maple. A meticulous historical reconstruction of the researches of the pre-historic range of this enigmatic species was published in 1936 by the Prof. Antonio Baldacci edited by the Academy of Sciences of Bologna Institute “Sull’ Aesculus hippocastanum L. – A proposito di un relitto dendroide eurasiatico della flora balcanica e specialmente illirico-ellenica”. 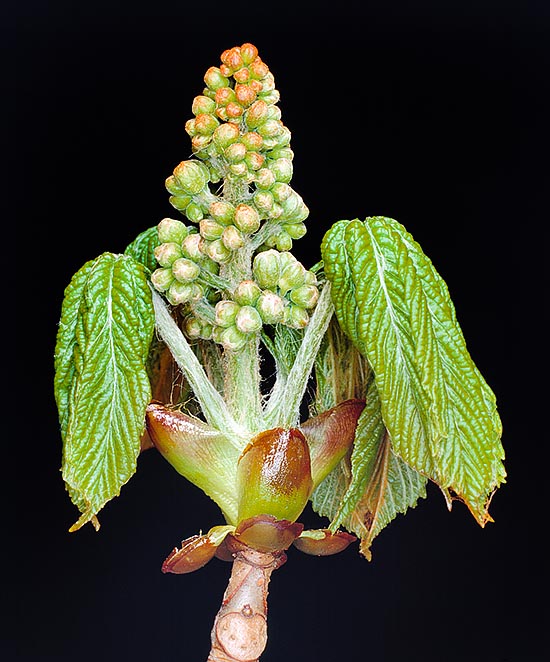 “Aesculus hippocastanum, an Euro-Asian dendroid wreck of the Balkan flora and especially of the Illyrian-Hellenic one”.

Fossils of horse-chestnut were found in some places of the Padan Plain, as a testimony of the presence of the species at a time before the last Quaternary glaciations (Pliocene and lower Pleistocene), when the climate of Europe was decidedly warmer than the present one.

It has survived at the time in the southern regions of the Balkan Peninsula and in a restricted area on the eastern coasts of the Black Sea, known refuge areas, escaped to the glaciations, as many other relict entities.

The Horse-chestnut (Aesculus hippocastanum L. 1753) is an elegant, large deciduous tree, 10-20 (30) m tall as an average, with largely oval or sometimes pyramidal cyme, sustained by large branches, often twisted and arranged in the shape of a candelabrum, carried by a rather short stem.

When young, the bark is smooth and grey, with the age becomes dark grey-brown or blackish and desquamates in irregular and polyhedral scales.

The young branches have brown-clear or greyish bark, finely pubescent, with (2-6) longitudinal lenticels and red, up to 3-5 cm long buds, brown-reddish, resinous in dry weather and viscid when the same is wet.

The leaves are large, with an up to 20 cm long petiole, grooved and enlarged at the base (when detaching it leaves on the bark of the branches a showy horseshoe-shaped scar), opposite, palmate, with ferruginous down when young, divided n 5-7 large segments, oblanceolate (up to 12 x 25 cm) and with pointed apex, irregularly jagged at the margins, which depart from one only pint at the end of the petiole, dark green above, paler in the lower page. Pentafid calyx, hermaphroditic flowers, zygomorphic, opening in April-May and united in showy erect terminal panicles (15-30 cm), pyramidal, with many perfumed flowers and of great beauty. 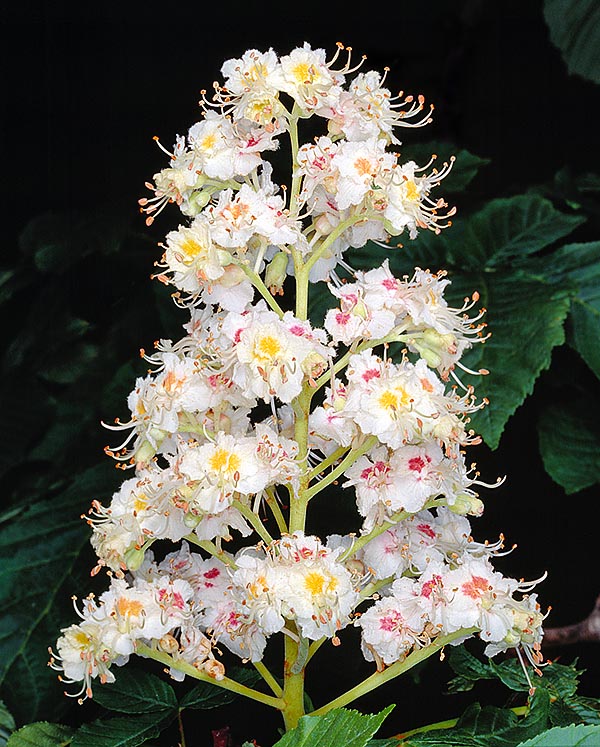 The inflorescences are showy panicles with odorous flowers, double at times © Giuseppe Mazza

When the blooming is completed, begins the development of the fruits (capsules) which in 4-5 months ripen and reach a diameter of 3-6 cm, ovoid, of greenish or green-yellowish colour, with a sparse cover of spines less thin and spiny than those of the “cupule” of the true chestnuts; each one of these, dehiscent by three (rarely two) valves: they contain one to three (4) seeds known as “conkers”, glossy, of ferrugineous brown colour when ripe with big white or greyish hilum; oval-depressed shaped if isolated or semi-oval with one or two flattened sides if by two or three-four in the fruit.

It is an amply cultivated tree in most Europe and in other temperate zones of the world for its shade and as ornament of the alleys, isolated or in group in the parks from the plan up to about 1300 m of altitude, rarely sub-spontaneous.

Prof. Sandro Pignatti in his opus Flora d’Italia (Italian Flora) writes: “… it does not show tendency to naturalize in spite of the great production of seeds which germinate regularly, however the young plants die usually in a few years”. In some areas of central-eastern Europe it seems that its naturalization is proved.

It loves the siliceous, fresh and deep soils but it bears also situation of little fertility. It has a rather superficial rooting system and is little resistant to the saltiness and the strong winds; when growing isolated in suitable grounds and not submitted to pruning its trunk may reach diameters of 2,5-3 metres and exceed the age of 200 years. During the last decades there has been a strong reduction of this species planted in the cities and in the towns mainly during the first decades of 1800, for its beauty as well as because they (erroneously) thought that the seeds were capable to eradicate the cholera outbreaks so much recurrent at those times. 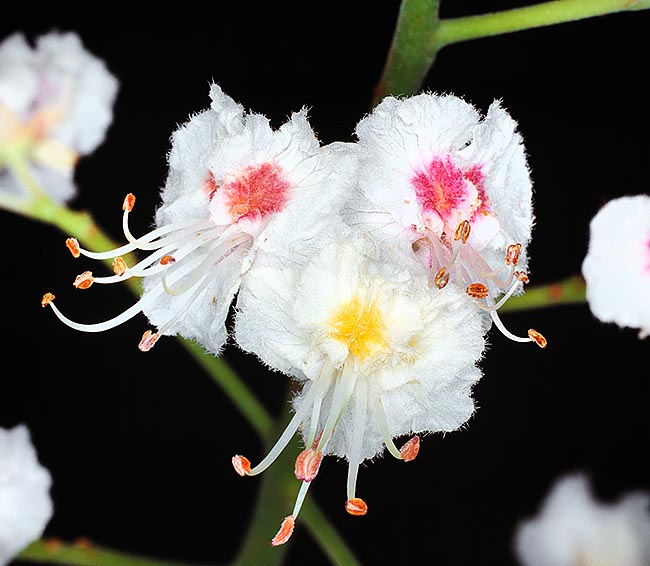 To help the bees, they have a yellow spot if rich of nectar and red if it’s over © Giuseppe Mazza

Probably this was due to the remarkable percentage of tannins present which did act slowing down the dysentery caused by the vibrio. On one side the age of the trees and the irreversible damages caused by the caries generated by the drastic pruning, the pollution of the cities and the summer drought, on the other, the attacks of leaf blotch (Guignardia aesculi) a fungus causing foliar dryness and by the recent introduction of the horse-chestnut leaf miner, the Cameraria ohridella, a tiny leaf miner lepidopteran of the family Gracillariidae, native to the of the foliar tissue under the cuticula rendering the tree to appear dry as in autumn already in summer.

The wood of the horse-chestnut, white-yellowish, is little prized because tender and fibrous, and, moreover, short-lasting. Cut when fresh has a typical spell of wrinkled potatoes; it is used, being absorbent like that of the poplars, in the fabrication of the fruit crates, for making plywood and in pyrography.

Are cultivated, but more rarely, some horticultural varieties such as the ‘Memmingeri‘ of great development and with the leaves often carved, the ‘Asplenifolia‘, with laciniate leaves, the ‘Aureo-variegata’ with golden-yellow spotted leaves, the superb, with double flowers and the ‘Laevis’ with capsules without spines, besides the congeneric specie with smaller development Aesculus pavia (= Pavia rubra Poir.), the Aesculus parviflora Walt., the Aesculus indica Colebr., the Aesculus octandra Marsh., the Aesculus carnea Haine, (= Aesculus rubiconda), crossing between Aesculus hippocastanum and Aesculus pavia. 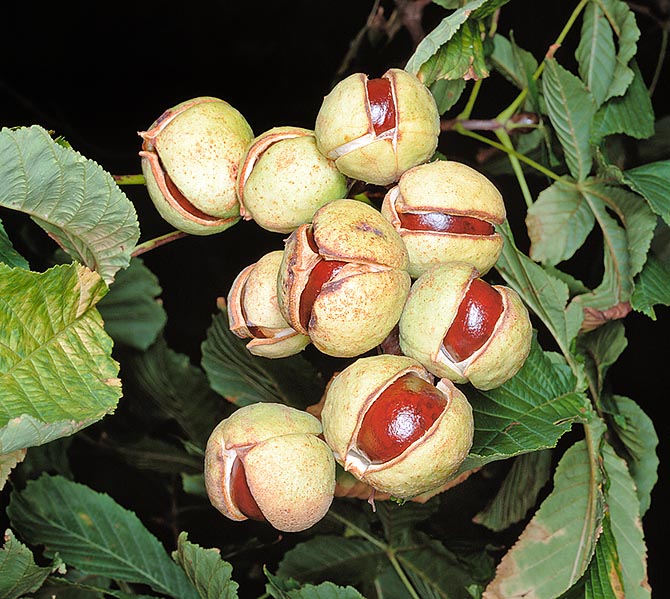 The capsules are usually spiny, but the form ‘Laevis’ is spineless © Giuseppe Mazza

With phytotherapeutical purpose, the buds are collected in February-March, the leaves in June-July, the bark of the 3-5 years old branches in spring and the seeds in September-October.

The husk of the seed, the buds and the bark of the young branches contain coumarin glycosides (aesculin, fraxin, quercitrin and scopolin), aesculetannic acid, allantoin, resins and pectins. In particular, the aesculetin is used in the preparation of sunscreens due to its capacity of filtering the UV rays.

The pharmacological activity is mainly linked to the presence of the aescin, seen its characteristic antioedema properties. The main action of the aescin is given by the fact that it decreases in the blood some particular enzymes, higher in presence of vascular diseases, and this reduces the pathologic permeability of the small blood vessels, thus contrasting the excess and the water retention in the tissues. 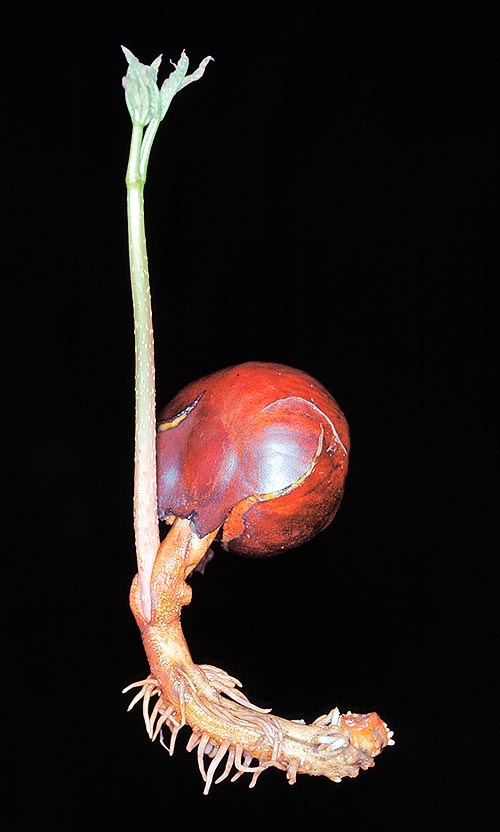 The preparations based on horse-chestnut are used mostly in the capillary fragility, in the couperose, in all the oedematous conditions and also for local applications when treating varicose veins, phlebitis, piles, contusions and hematomas.

They soothe the pain, act on the varicose walls favouring the constriction and, therefore, the disappearing of the tumescence; moreover the saponin should decrease the level of viscosity of the venous blood easing its flowing. The family employment is to be limited to the external preparations.

In the veterinary medicine, the seeds are given to the horses and to the cervids for treating the emphysema and the forms of arthritis.

A domestic employment suggests to boil the seeds, previously peeled and crushed in little water up to obtain a thick and viscous paste utilizable as excellent glue resistant to the years and imputrescible.

Another use of the seeds, justified by the presence of saponins which render the seed toxic for the man if ingested raw, was that of crushing the pulp of the peeled fruits, to add some soda, and use them for washing the dark clothes getting also a slight starching.

The fresh fruits, holed and strung with twine to make necklaces, were hung in the closets in order to keep away the clothes moths and other insects from the food supplies.

Lotion for reddened skin, with acne or couperose

80 g of seeds shredded and crushed in half a litre of water: to boil fifteen minutes and filter warm. To be used lukewarm applying locally with cotton wool.

120 g of pulp of seeds shredded and crushed in half a litre of water. To boil gently until all is reduced to a puree. To apply warm on the cellulite zones without rubbing, covering with a towel and then stay at rest for fifteen minutes. Rinse with lukewarm water. The application is to be repeated every day for at least one week. 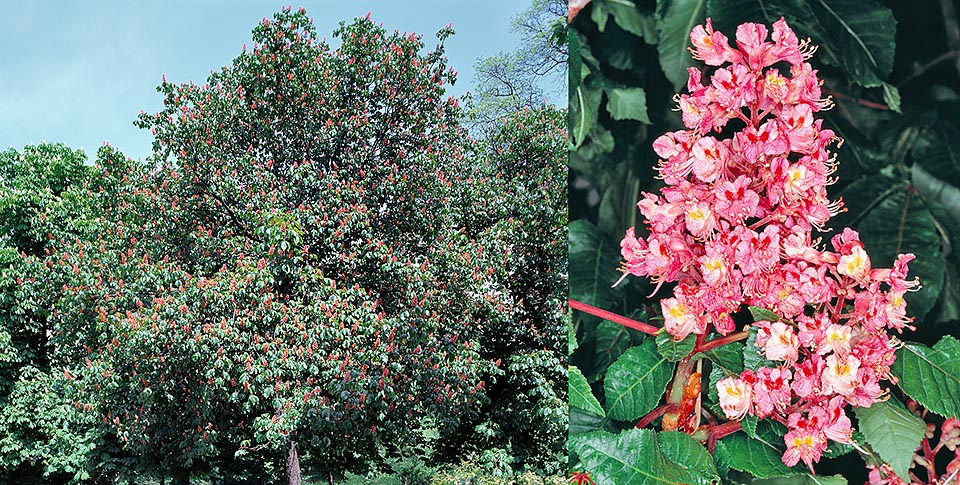 There are 20-25 species of Aesculus and many horticultural forms. The showy red flowers of Aesculus hippocastanum and Aesculus pavia is known as Aesculus x carnea © Giuseppe Mazza

→ To appreciate the biodiversity within the SAPINDACEAE family please click here.