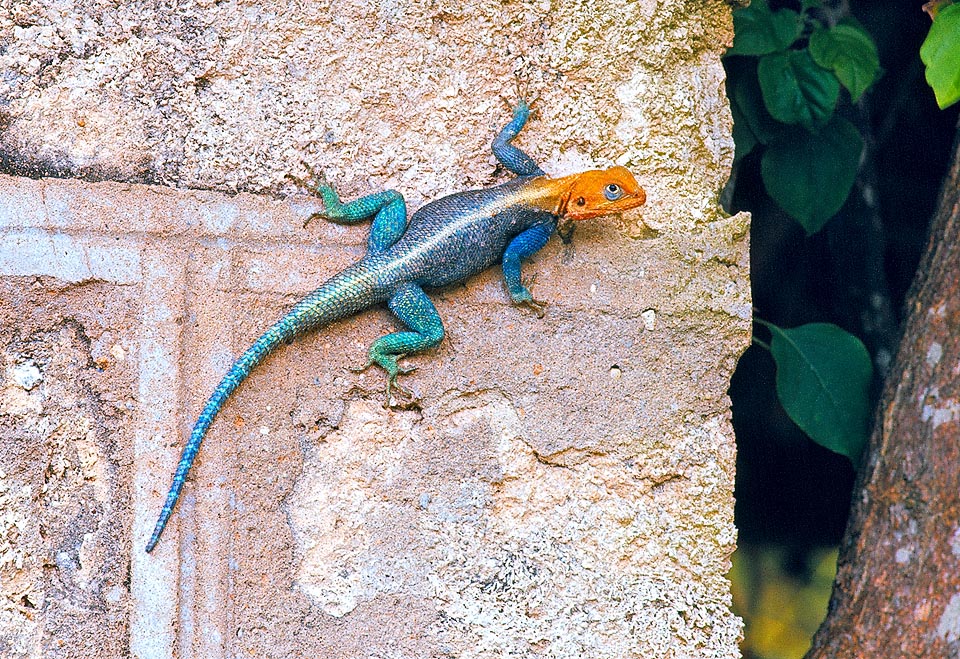 At most 40 cm long, the Agama agama lives in most of the sub-Saharan Africa. In the reproductive period the males get showy nuptial liveries © Giuseppe Mazza

The Common agama (Agama agama Linneus, 1750) is a saurian belonging to the family of the Agamidae, that counts about 480 species present in the warm zones of Africa, of South-East Asia and of Australia.

Taking it literally, the scientific name of the species should come from the Greek “αγαμος” (agamos), composed by the prefix “α” privative = without and “γαμος” (gamos) = marriage, and in fact the males of the Agama agama are bachelors with many wives, but actually Linnaeus, being convinced that it came from America, in his Systema Naturae talks of a Lacerta Agama with the species written in capital letters taking as substantive the Creole name of lizard, with which the slaves coming from West Africa called the chameleons. 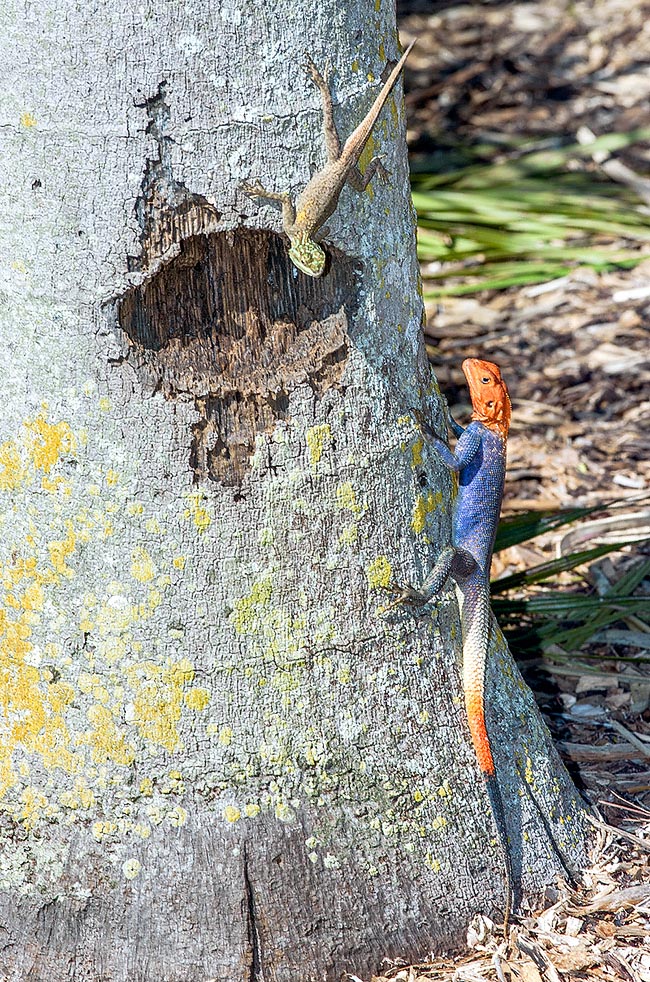 Young female and male. The mating take place usually just before the season of the rains © Giuseppe Mazza

Common in most of sub-Saharan Africa, it has been introduced in the Cape Verde Islands, in Madagascar, Comoros, Reunion and other sites, even in Florida where is now at home on the enclosure wall and the palms of the Fairchild Tropical Botanic Garden.

It is a terrestrial diurnal reptilian, born for the bushy savannah with big emerging boulders, the famous kopjes, and other rocky formations where the dominating males begin the day warming up in the sun in places close to their small kingdom that counts at most about twenty subjects between young and females.

Now, however, the species has greatly entropized and is so much common on the walls of the houses to deserve in various languages also the name of Agama of the settlers.

It can reach the 40 cm of length, including the tail, longer than the body, and displays a remarkable sexual dimorphism, especially in the reproductive period when the dominant males enhance the colours and is immediately evident the difference with the olive brown livery of the females and of the subordinate adolescents. Not only the head but all the fore part shines then of yellow-orange, red or magenta in elegant contrast to the blue of the body more pronounced than usual. The abdomen is whitish.

Spiny scales on the nape, the throat and close to the eardrums protected by three pointed tufts. Hearing is very fine. The eyes, like those of the geckos and of the snakes, are protected by a transparent scale and can emit popping sounds to report presence or irritation.

The main dish of the Agama agama is formed by ants and termites, it easily catches with the tip of the tongue rich of mucous glands, but nourishes also of spiders, grasshoppers, coleopterans and in general of all it finds on the soil, including small vertebrates, fruits and buds.

The dominant males share the hunting territories putting themselves well in sight from the morning, when, abandoned the night grey livery the colours revive with the sun. Each member of the group has, hierarchically, its own small hunting zone and before attacking with blows of tail in face the adult males approaching the boundary, the dominant sends clear warning signals, raising and lowering the head with the scales of the throat spread while it raises repeatedly on the fore legs following a precise ritual that usually avoids the fights. 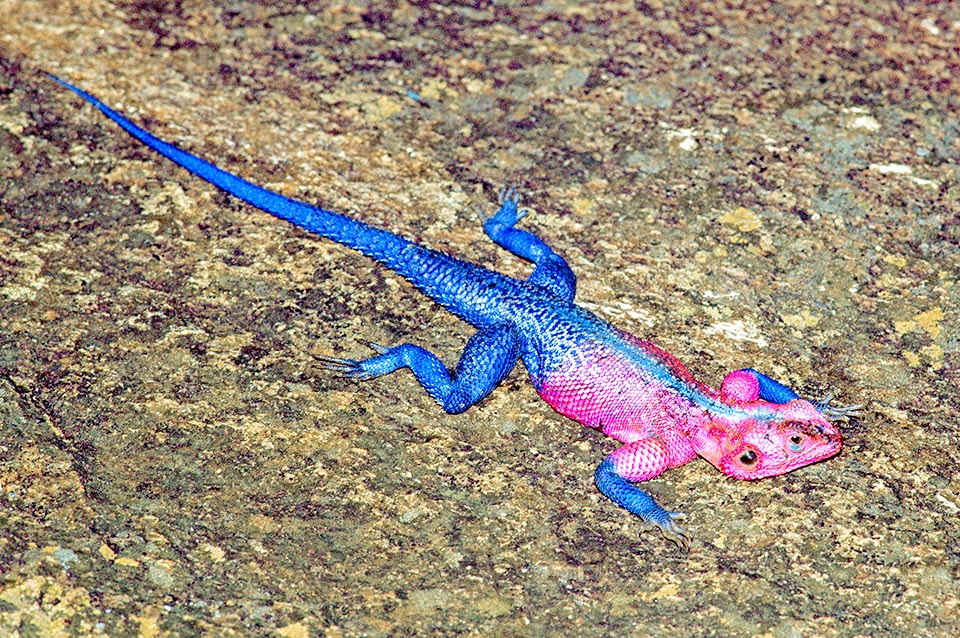 The Agama agama nourishes mainly of ants and termites it catches rapidly with the tip of the tongue rich of mucous glands, but also of spiders, grasshoppers, coleopterans and generally of all it finds including young vertebrates, fruits and buds. For limiting their territory, the dominant males attract the attention on the big rock close to their kingdom with ritualized movements of the head and of the fore legs. By night, in the dens, it is useless to show up and then all colours fade into a uniform grey © G. Mazza

The females reach the sexual maturity when 8 months old, the males when two years and the mating occur usually at the beginning of the rain season. Once the fecundation has taken place the females have on the sides some characteristic yellow-orange dots. After 10 weeks they bury 3-8 eggs in a small pit about 5 cm deep and well covered, usually dug in the humid sand. With the rains the eggs increase in volume and open in 2-3 months’ time.