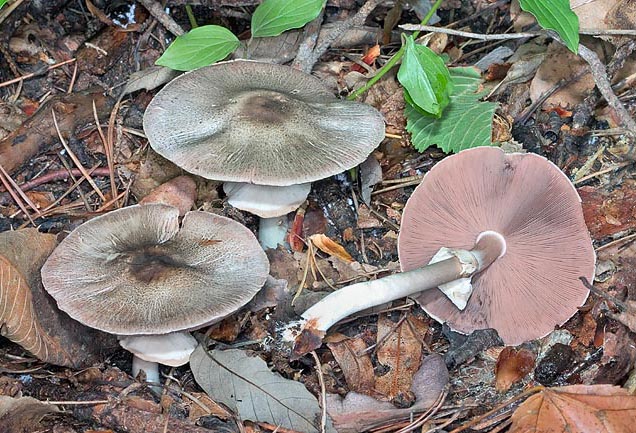 To the genus belong heterogeneous fungi, fleshy and with removable hymenium; the general veil is not always present unless a few species, evident at the base of the stem in the form of plates or flakes; the partial veil is always present, and forms a simple or double ring, pendant or sheathing.

The hymenophore is formed by gills free to the stem, with immutable thread or turning to the red or the yellow.

Description of the subgenus and of the section

To the subgenus Flavoagaricus are ascribed species yellowing when rubbed or cut and smelling anise, bitter almonds, amaretto, marzipan, but also ink, phenol or iodine.

To the section Xanthodermatei are ascribed medium sized species, with flesh strongly yellowing at the base of the stem and emanating an unpleasant smell like ink, phenol or iodine. The pendant ring (which means, detaching from the top downwards), is double, ample and consistent, decorated in the lower face. None of them is edible. 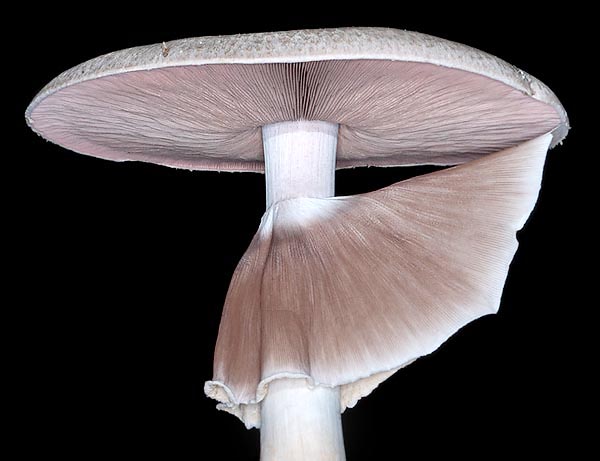 An Agaricus praeclaresquamosus ready for the wedding dance © Giuseppe Mazza

Cap: from hemispheric to convex, trapezoidal, finally flattened and even a little depressed, little fleshy, inrolled and slightly appendiculate margin; dry cuticle of a colour varying from the soot grey to the black grey, then dissociates in small scales starting from the centre, gradually more and more rare towards the margin, whilst it remains practically intact at the disc.

Hymenium: gills free at the stem, narrow and thick with numerous lamellulas, the colour is initially dark white, then pale pink and finally purple brown; the thread is sterile.

Stem: slender, lithe, cylindrical with at the base a rounded-margined bulb even much evident, becoming yellow when touched.

Ring: wide and membranous, double, pendant, white with the margin often stained of yellow, smooth in the upper side, underside toothed-wheel shaped.

Habitat: it is a species considered saprobic, it grows preferably in broadleaf woods, organic debris of various type. It is an autumnal growing fungus, more frequent in the plain and in low hills.

Edibility: it is a poisonous fungus which causes even serious gastric upsets.

Remarks: Agaricus praeclaresquamosus, like all species belonging to this section, is characterized by the yellowing at the base of the stem and the unpleasant smell of ink. It can be mistaken with A. praeclaresquamosus var. terricolor (Möller) Bon & Cappelli, which, however, has blackish disc and blackish-brown on grey background scales; with Agaricus phaeolepidotus Möller which is much similar, but differs for a slighter yellowing or, at the most, a reddening at the base of the stem.