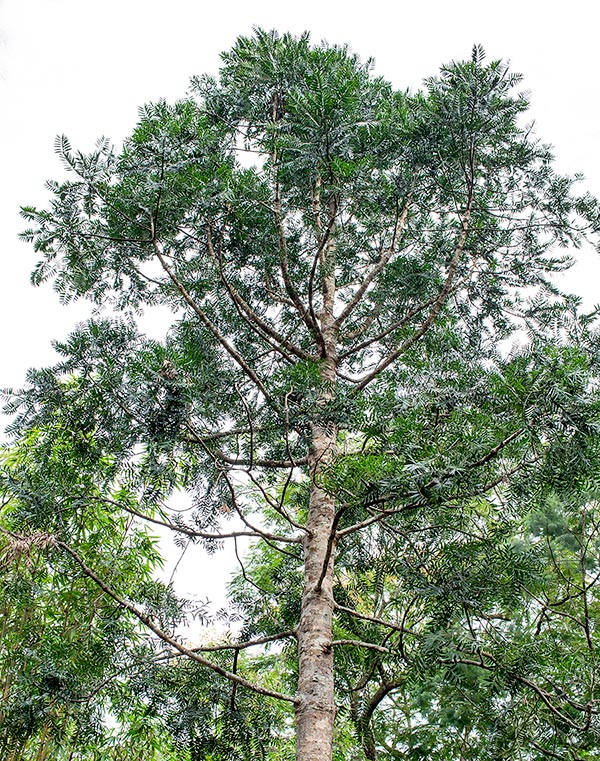 Even 50 m tall, Agathis borneensis grows in the humid forests of Borneo, Peninsular Malaysia and Sumatra. Straight trunk, cylindrical, that may exceed at the base the metre of diameter © Giuseppe Mazza

The species is native to Borneo, Peninsular Malaysia and Sumatra, where it grows in the humid tropical forests, in plain as well as in mountain, up to about 2000 m of altitude, often on sandy soils.

The name of the genus comes from the Greek “ἀγαθίς” (agathis) = clew, with reference to the shape of the inflorescences; the Latin specific name “borneensis” = of Borneo, refers to one of its origin places.

The Agathis borneensis Warb. (1900) is an evergreen monoecious tree, up to about 50 m tall, with straight trunk, cylindrical, that may exceed at the base the metre of diameter, with fissured bark or with scales of grey to blackish colour and branches concentrated in the hugh part of the trunk in the old specimens.

Axillar male cones, solitary, initially globose, almost cylindrical with rounded apex when ripe, 2-6 cm long and of 2-3 cm of diameter, with imbricate scales and 4-10 oblong polleniferous sacs. Female cones, solitary, ellipsoid to globose, of 6-10 cm of length and 6-8 cm of diameter, initially green, then brown when ripe, with triangular imbricate scales with rounded apex; the cones take about 2 years for ripening. Oblong seeds, 1,2 cm long, and 0,8 cm broad, with two unequal opposite wings, one about 2 cm broad, the other about 0,5 cm. It is reproduced by seed, that must be interred in the shortest possible time, as losing the germinability after some weeks, in draining loam, sandy, acidic, maintained constantly humid at a temperature of 25-28 °C, with the wing exposed and facing upwards. One of the most appreciated species due to the wood of uniform colour cream white to pale yellow, light, easy to work and to refine, utilized for inner parts, not being too resistant to the atmospheric agents, in the dwellings and in the boats, for high quality furniture, handicrafts, musical instruments and tools. The wood has the characteristic to be totally odourless, and for this reason in the past has been amply utilized to realize food boxes, in particular tea. 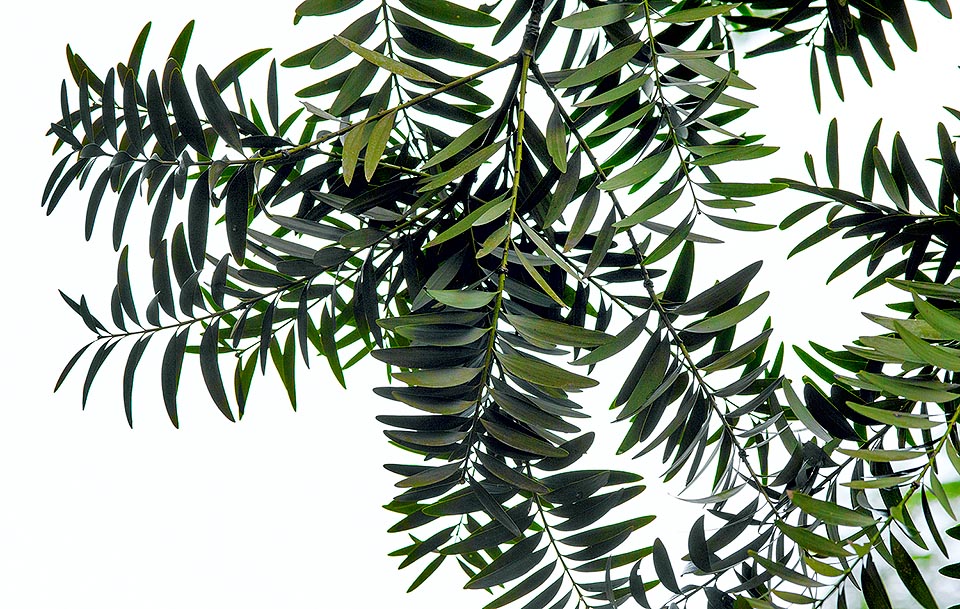 Coriaceous leaves, opposite or sub-opposite, simple with entire margin. The wood, much required, has led the plant into the red list of the endangered species © G. Mazza

Until recent times the tree has been object of an excessive and uncontrolled exploitation, with consequent drastic reduction of its presence in the wild, so much to be inserted in the red list of the IUCN (International Union for Conservation of Nature) among the species at extremely high risk of extinction in the next future (Endangered), it is therefore now encouraged the creation of plantations for commercial purpose.

It requires draining soils, acidic or neutral, maintained almost constantly humid, and an exposition in full sun, but in the initial phase of growth, when it is necessary a slight shade. From the inner part of the bark exudes a transparent to white resin, called “copal”, utilized as component of paints and in the production of the linoleum. The tree is at times cultivated as ornamental in the gardens of the tropical and humid subtropical climate zones.