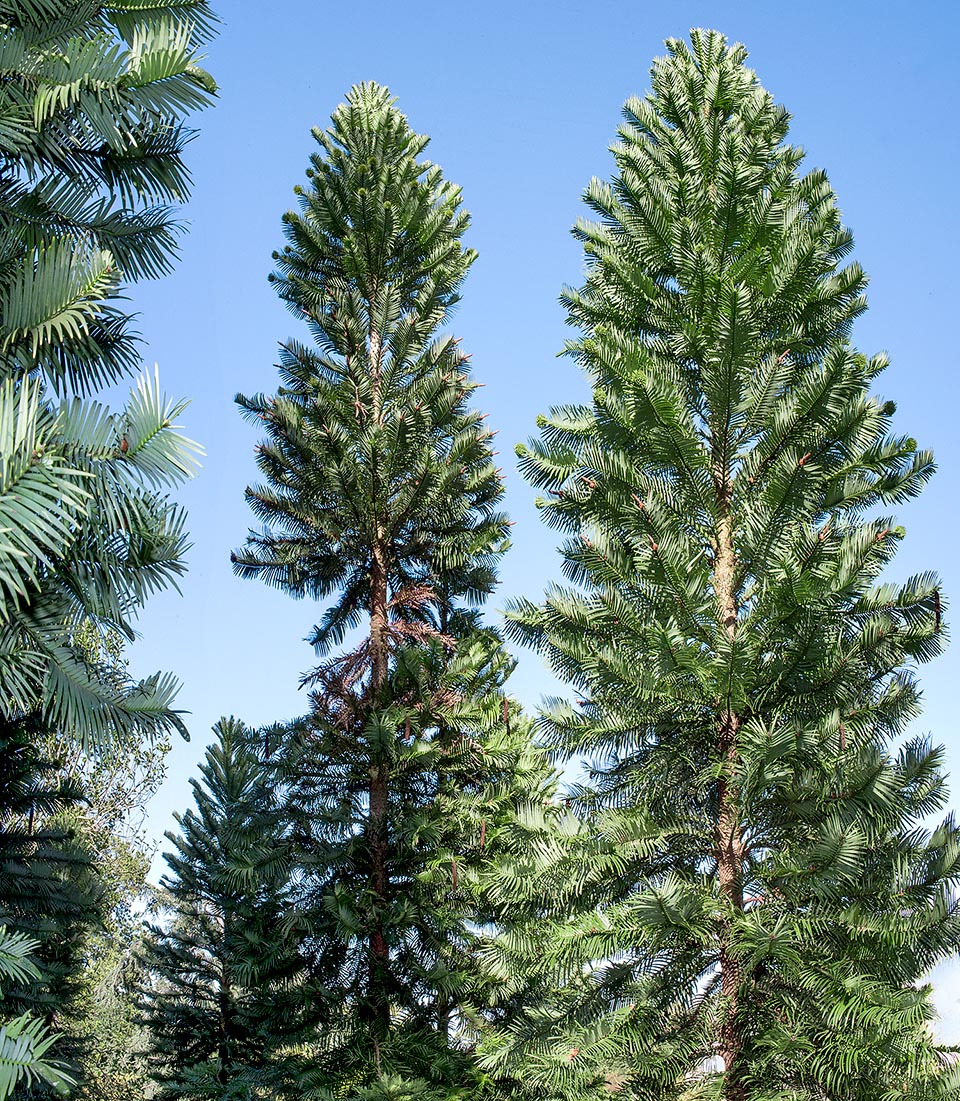 The family of Araucariaceae is very old, with fossil Triassic remains. It had a great expansion in the Jurassic and in the Cretaceous, Wollema nobilis is a real “living fossil” discovered only in 1994 in a deep gorge of Wollemi National Park, north to Sydney. Till then were known only fossil remains dating 90 million years ago © Giuseppe Mazza

The fossil remains of the family  Araucariaceae  are very old and date from the Triassic. This family had a huge expansion in the Jurassic and in the Cretaceous to then reduce in more recent times. Yore, it was present also in Europe, but nowadays it is confined in the Austral hemisphere: South America, Oceania and SouthEast Asia with only 40 species distributed in 4 genera:  Agathis, Araucaria, Columbea and  Wollemia. 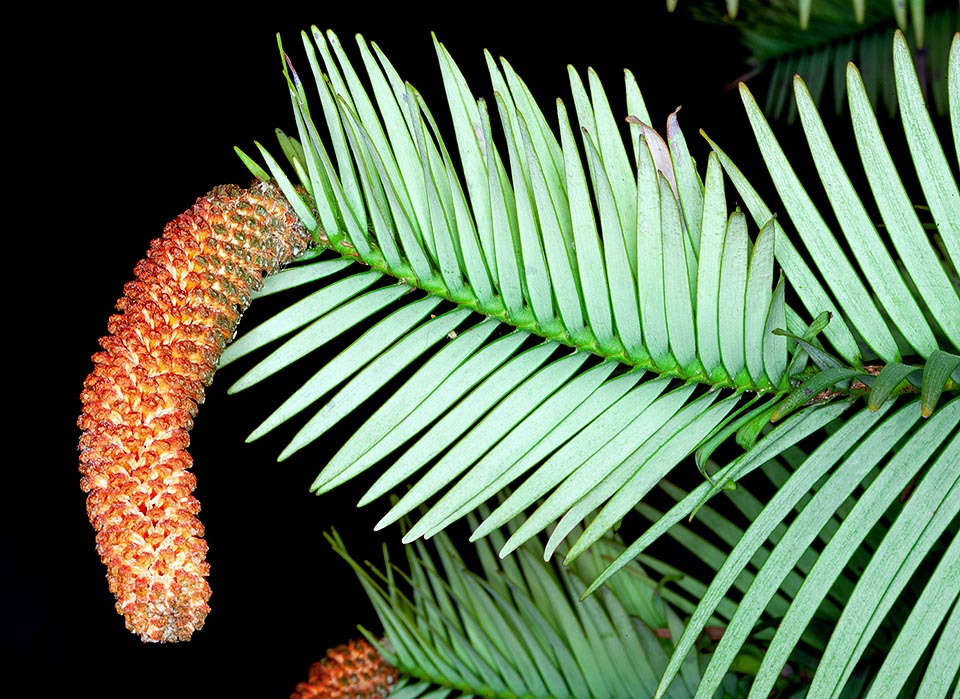 Close-up of the male cone of Wollemia nobilis. Araucariaceae can be dioecious plants, that is with separate sexes on male and female plants, or monoecious with male and female cones on the same individual. They are evergreen trees with spirally arranged leaves, rarely large, usually narrow, normally with parallel veins © Giuseppe Mazza

They are evergreen trees, with spirally arranged leaves, usually narrow, rarely large, with usually parallel veins. The individuals can have separate sexes, therefore we have male plants and female ones (dioecious plants), or both on the same individual (monoecious plants). 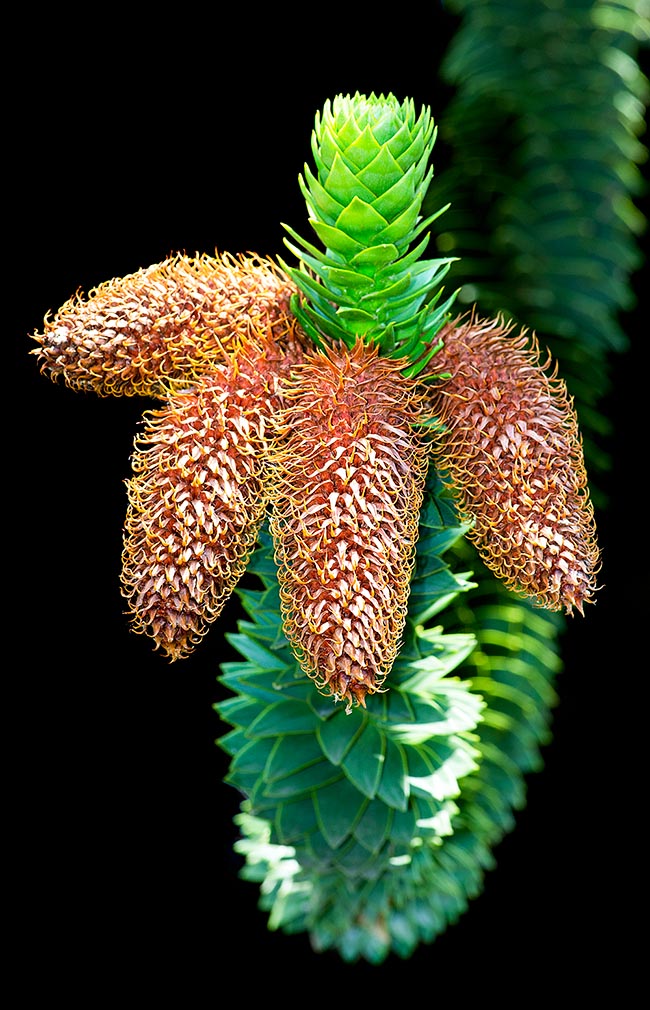 Araucaria araucana male cones. The Araucariaceae male cones are usually cylindrical, facing down whilst the female’s cones are mostly erect with a roundish appearance but take two years to ripen © Giuseppe Mazza

The male cones are big, cylindrical with numerous sporophylls having 5-19 pollen sacs forming pollen granules without  wings but Agathis that has them winged. The female cone ripens in two years and is generally erect, subglobose or ovoid, great and milky and has fertile scales with only one ovule.

The wood is of homoxil type with a very positive structure of araucarioid type for the fibrotracheids have several areolate dottings without central thickening (toro) and are regularly distributed. This confirms the ancestral character of the family.

Many species of this family live in symbiosis with fungi with mutual benefit. The fungus increases the capacity of the plant to absorb water and the plant gives nutrients to the fungus. In fact, on the terminal roots of the plant gets form a mycelial coating called the mantle of mycoclena where the fungal hyphae penetrate between the epidermal and cortical cells without any way to cross the walls of the cells. This type of mycorrhiza is called ectomycorrhiza.

The genus Araucaria is surely the most known as some species ascribed to it are very appreciated as ornamental trees in parks and gardens due to the impressiveness and the singularity of their forms.  Among these we cite A. excelsa, native to Norfolk Island in Oceania, A. bidwillii  in Queensland (Australia) and A.araucana in Chile.

To the genus Agathis belong Indo-Malay and New Zealander species characterized by big trees with robust trunks, without branches in the lower part, and with smooth bark having small scales of grey or grey-reddish colour. The leaves are opposite, linear or elliptic and the cones flake off when ripe, freeing oval seeds with wings, normally asymmetric, that are dispersed by the wind. Some plants of this genus furnish excellent resins.

In 1994 three explorers, (David Noble, Michael Casteleyn  and Tony Zimmerman) discovered, in a deep gorge of the Wollemi National Park, north of Sydney (New South Wales, Australia), a group of adult plants of a new genus Wollemia with one unique species W. nobilis real “living fossil” as till then where known only fossil findings dating 90 million of years ago. 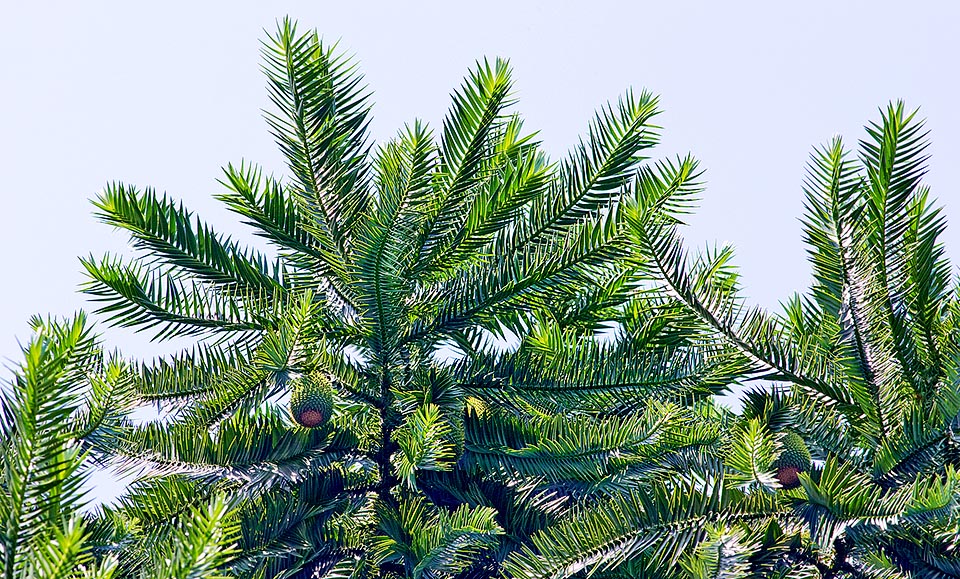 Araucaria hunsteinii with female cones. The wood of Araucariaceae is of homoxil type, confirming the ancestral character of the family. It’s only formed by fibrotracheids serving as water conductors and in meantime have a mechanical function of support. Plants sometimes rich of resin, living often symbiont with fungi © Giuseppe Mazza