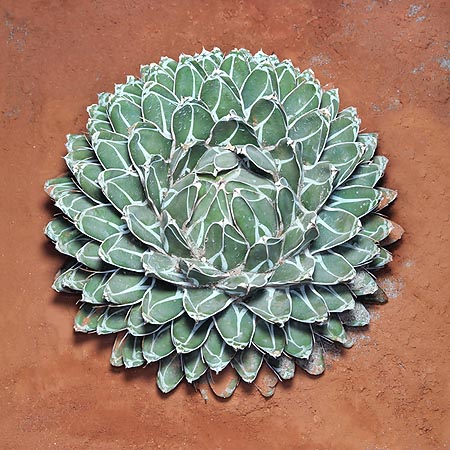 The Agave victoriae-reginae T. Moore (1875) is native to the semi-desert zones of north-eastern Mexico (Coahuila, Chihuahua, Durango and Nuevo Leon), where it grows mostly in calcareous soils.

The name of the genus comes from the Greek “agaué”, feminine of “agauos” = noble, splendid; the species was honoured to Victoria (1819-1901), queen of the United Kingdom.

Monocarpic (it blooms only once, then dies), acaulescent succulent, formed by an extremely compact rosette of rigid leaves, long up to about 20 cm and 4-5 cm broad, with an almost triangular section, of a dark green colour, on which some longitudinal white lines are conspicuous. A robust thorn, 1-3 cm long, with two small lateral thorns, is present on the apex of the leaf, whilst the edges of the leaf are completely not provided of same.

Slow growing, it can form rosettes of 40-45 cm of diameter, usually solitary, but there are also specimen able to emit stolons.

The terminal inflorescence, which appears, roughly, around the thirtieth year of age, is a spike which can be more than 4 m long, with several flowers of a pale green colour, at times with purple red tones. The species is rather variable, and this has given origin, in cultivation, to different varieties.

Plant of enormous ornamental value, due to its regular and compact shape and to the presence of the white streaks on the leaves; furthermore, its reduced dimensions render it suitable for small spaces and for the cultivation in pot.

It is cultivable either in full sun, which increases the intensity of the colour of the leaves, or in slight shade, on well draining soils, being sensitive to water stagnations; it can bear long periods of drought and for what temperatures are concerned, although it seems that it can resist up to -10 °C, it is advisable not to expose it to temperatures already around the 0 °C, in order to avoid anti-aesthetic damages to the leaves.