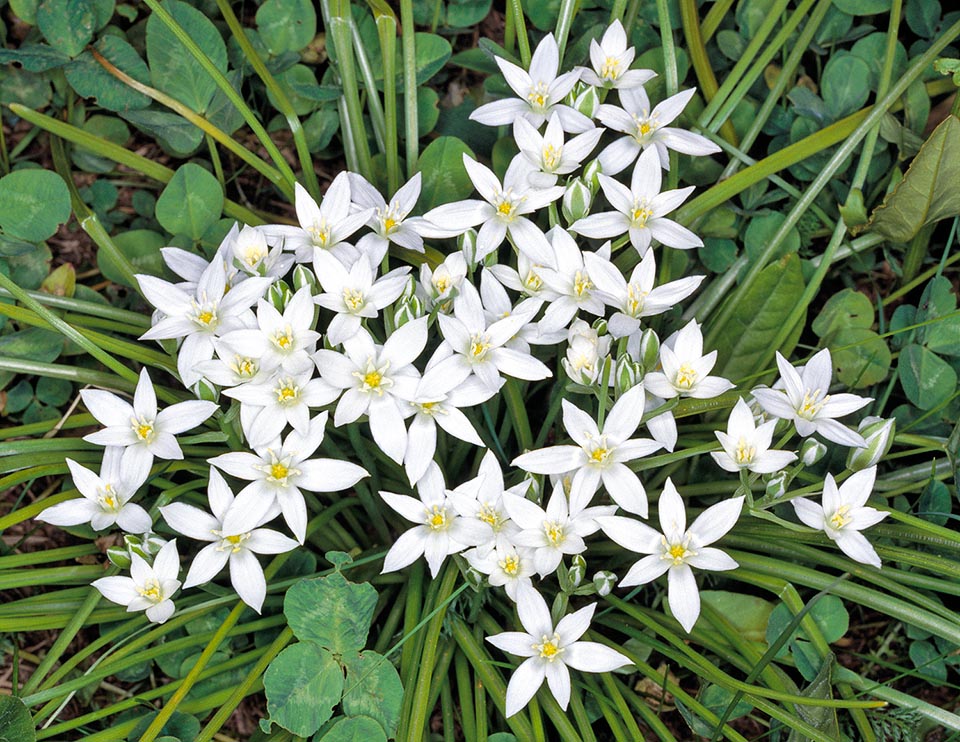 The plant classification, yore based only on the morphological resemblances, now avails of molecular analysis to highlight affinities between species. So, changes in the taxonomical locations of many groups that move from one family to another, from a genus to another, or even divided in different genera, creating changes also of nomenclatural type. Consequently some genera, previously given to the family of Lilliaceae, have been inserted in the Asparagaceae subfamily © Giuseppe Mazza

The family Asparagaceae groups species that in the past were included in the family Liliaceae that united many genera in more than a twenty subfamilies. The recent APG III (Angiosperm Phylogeny Group III, 2006) classification, based mainly on the molecular phylogenetics, has moved many genera belonging to the Liliaceae in various other families, among which the family Asparagaceae that is extremely diversified. The single species are deemed similar mainly because of the genetic and evolutionary relations and not because of the morphological resemblances.

The family Asparagaceae has species distributed in almost all the world and include about 150 genera in more than 3000 species deemed valid and divided in their turn in 7 subfamilies. Agavoideae, Aphyllanthoideae, Asparagoideae, Brodiaeoideae, Lomandroideae, Nolinoideae, Scilloideae. It is possible, however, that future studies will be able to modify the collocation of the genera in the subfamily (here below described), as well as their phylogenetic relations. 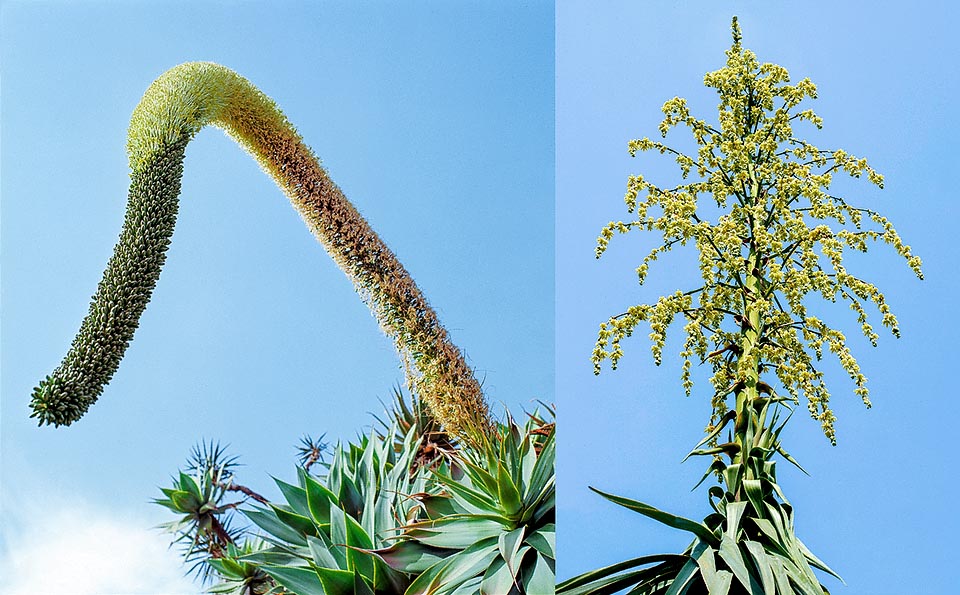 The subfamily Agavoideae is formed by about 640 species diffused in the temperate and tropical regions of central-northern America.

They can be either succulent or not. The leaves are evergreen, alternate, spiralled, small or very big with parallel veins, often fleshy with a hardened dorsal spine at the extremity and, at times, with long spines along the margins, sessile, arranged in rosettas at the extremity of a woody stem that may be short or very long like in Yucca brevifolia. 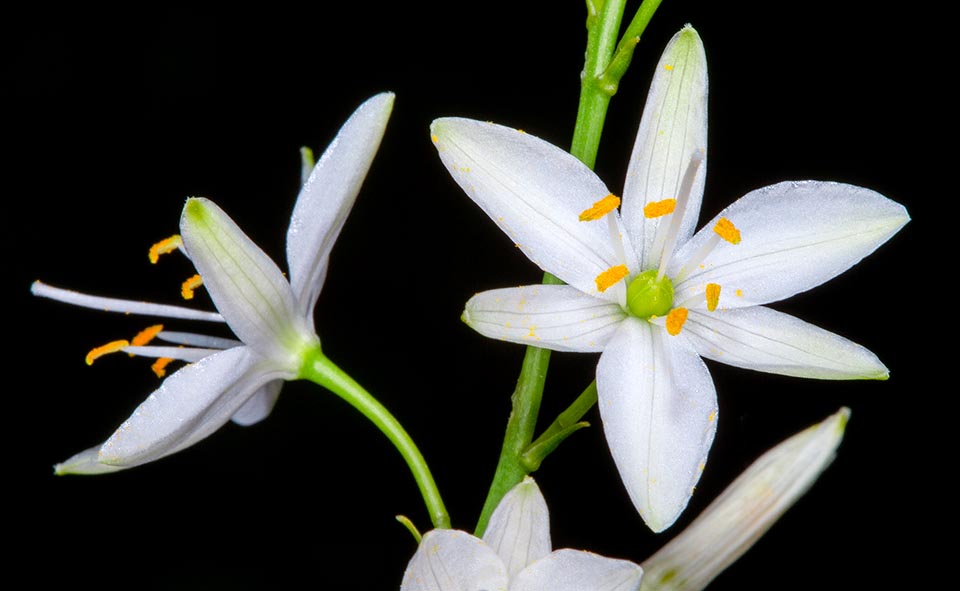 Anthericum ramosum. Agavoideae are herbaceous, succulent or woody plants. The flowers, with one style, 6 tepals and 3 or 6 stamens are merged in apical inflorescences © Giuseppe Mazza

The flowers are small or medium, regular or irregular, always in apical inflorescences of panicles or spikes, accompanied by a spathe. The tepals are 6, stamens 3 or 6, the style, one. The pollination takes place by means of diurnal and nocturnal insects, birds, bats. Can be found species with separate sexes on different individuals (dioecious plants), with separate sexes on the same individual (monoecious plants), or hermaphrodite species (plants having flowers with stamens and pistils). The fruit is fleshy (berry) or dry, opening when more or less ripe (capsule).

Many species of Agave are utilized to produce syrups, drinks (aguamiel) and distillates (tequila, pulque and mezcal), others for the production of textile fibres. Moreover, they are very diffused in the parks and gardens because of the beauty of their showy flowers and their resistance to drought. The most important genera for this purpose are: Agave, Furcraea, Hesperaloe, Manfreda, Yucca. 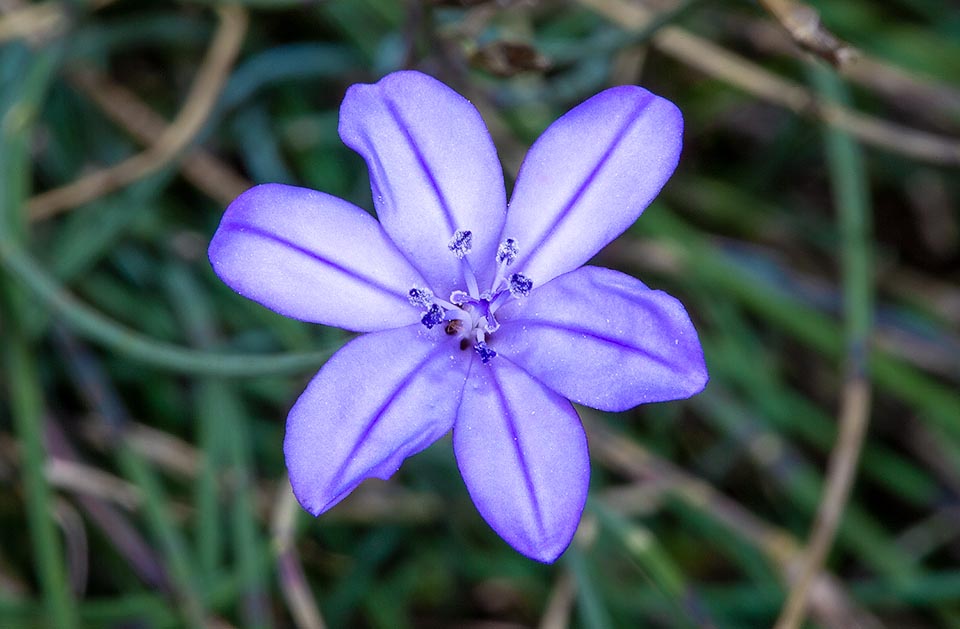 Aphyllanthoideae subfamily has only one genus and only one species endemic to West Mediterranean: Aphyllanthis monspeliensis © Giuseppe Mazza

The subfamily Aphyllanthoideae (= Aphyllanthaceae) with the only genus Aphyllanthes and the only species A. monspeliensis, endemic to western Mediterranean, characterized by long floriferous scapes having no leaves, reduced to sheaths thin at the base and by flowers with 6 tepals truncated at the vertex, of pale blue colour, rarely white, with a darker median vein.

When ripe, they form capsule-shaped fruits with three dark seeds.

Specimens of Aphyllanthes are cultivated in the rocky gardens due to their rusticity and the large and luminous flowers present from April to July. 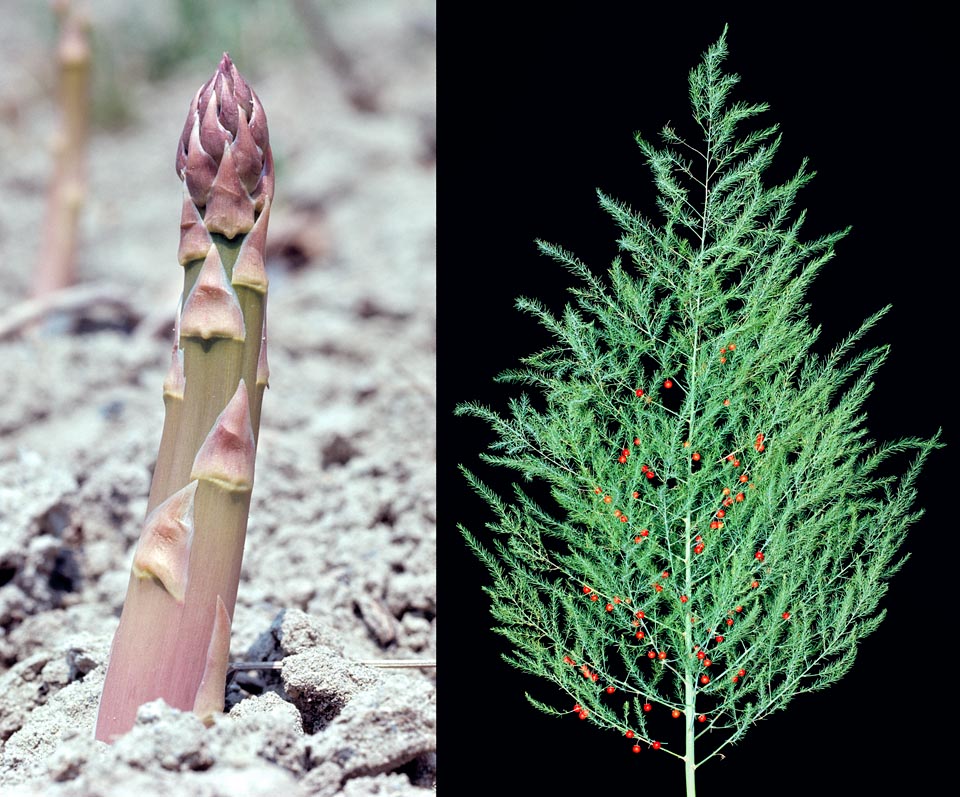 Asparagoideae subfamily, or Asparagaceae stricto sensu, has about 300 species, among them Asparagus officinalis, known for its medicinal virtues and tasty buds © Giuseppe Mazza

The subfamily includes only two genera, Asparagus with about 300 species of perennial plants native to Europe, Asia and Africa, and Hemiphylacus with five species endemic to Mexico.

To the genus Asparagus belong perennial herbaceous plants with more or less woody, at times sarmentose, robust stems. The leaves are reduced to little visible membranaceus squamae, whilst the branches flatten to the shape of leaves (phylloclades) to carry out the photosynthesis process. They have perennial rhizomes from which develop fasciculate roots and also the young buds, called turions.

The flowers are campanulate of white-greenish, at times yellowish, colour, 4,5-6,5 mm long, with six tepals partially merged at the base, isolated or in groups of two or three units. 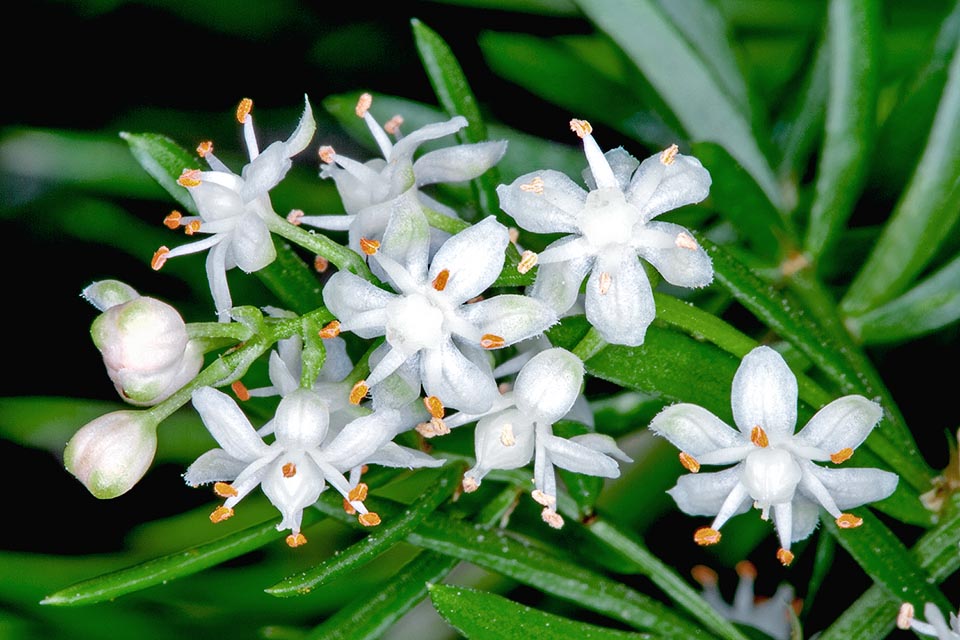 Usually the plants are dioecious, that is they do have male and female flowers on different individuals but at times hermaphrodite flowers are found.

The fruit, when ripe, is a small red berry of 6-10 mm of diametre, toxic for man.

Many species of Asparagus are also cultivated as ornamental plants, besides their medicinal properties.

The economically most important species of the genus is A. officinalis, cultivated in the temperate and subtropical areas of the world because of the young edible epigeal buds, particularly rich in glutathione, an effective antioxidant for cancer prevention. The rhizome and the roots are used also in pharmacy as diuretic. 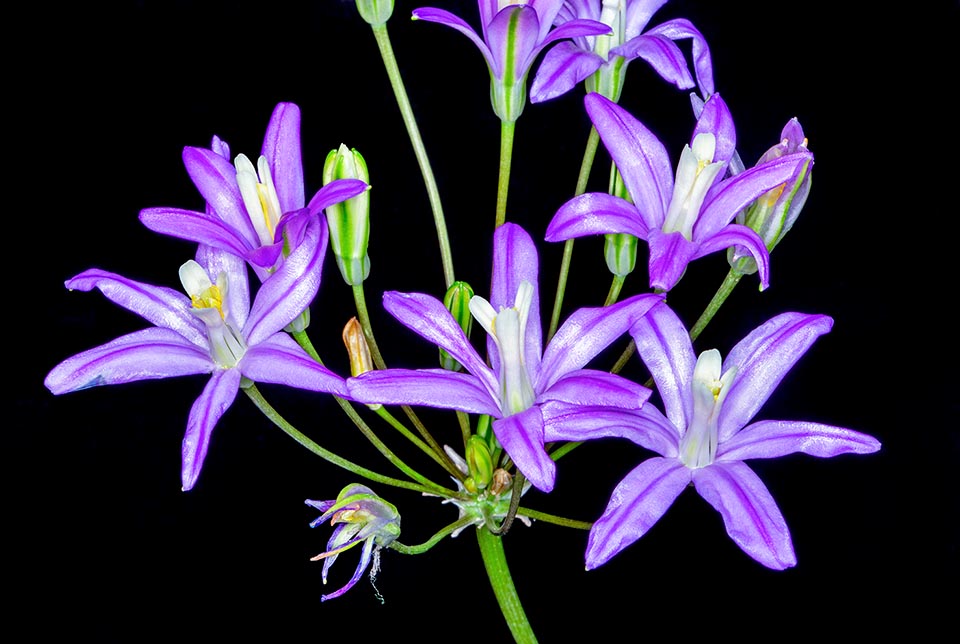 Le Brodiaeoideae are plants native to Central America and western North America, from British Columbia to Guatemala. They are bulbous plants, with linear leaves, often fleshy and with parallel veins. At the apex on a solitary floriferous scape get form umbel inflorescences, or, rarely, one single flower. The fruits are bisexual, actinomorphic with 6 tepals all alike, 6 or 3 fertile stamens and anternated with 3 staminodes. Stamens and staminodes are inserted on the tepals. The ovary is superior and trilocular and forms a loculicidal capsule with black seeds due to the presence of phytomelon, a substance rich in carbon and very resistant to the action of the oxidant agents.

Recent studies have subdivided the Brodiaeoideae in 12 genera. The genera richest in species are Triteleia, with 15 species, and Brodiaea, with 14. Some species like Triteleia laxa and Brodiaea californica are commonly cultivated as ornamental plants quite suitable for borders or even for foming spots of colour. The bulbs of some species, like B. coronaria,  are edible and consumed in ancient times by some Californian tribes. 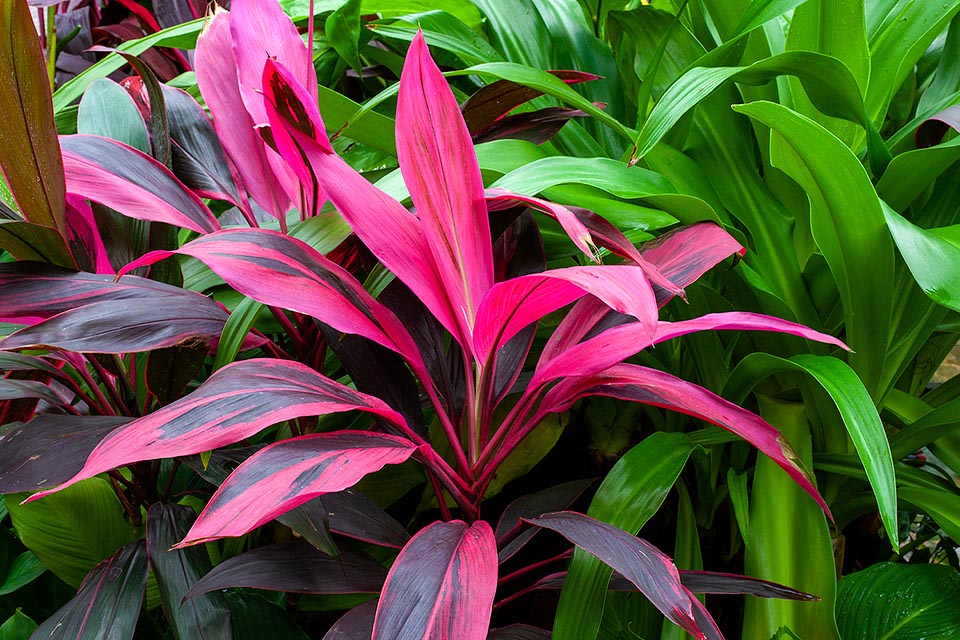 Cordyline fruticosa. To the subfamily Lomandroideae belong about 180 species, united by some authors in the Laxmanndroidae femily. They are plants coming from Australia, New Zealand, South-East Asia, Americas and Pacific islands. The most known genus is Cordyline, with about 12 species and several hybrids with splendid leaves © Giuseppe Mazza

The subfamily is formed by about 15 genera and about 180 species coming from Australia, New Zealand, South-East Asia, Americas and Pacific Islands.

The most known genus is Cordyline with about 12 species that, in the origin locations, may become real trees, similar, and for this reason at times mistaken, with those of the genus Dracaena. They are very appreciated aesthetically especially because of their elegance. In fact, they can be found in an ample variety of forms, dimensions and colours of the leaves and can grow indoors as well as outside in the regions with temperate climate. 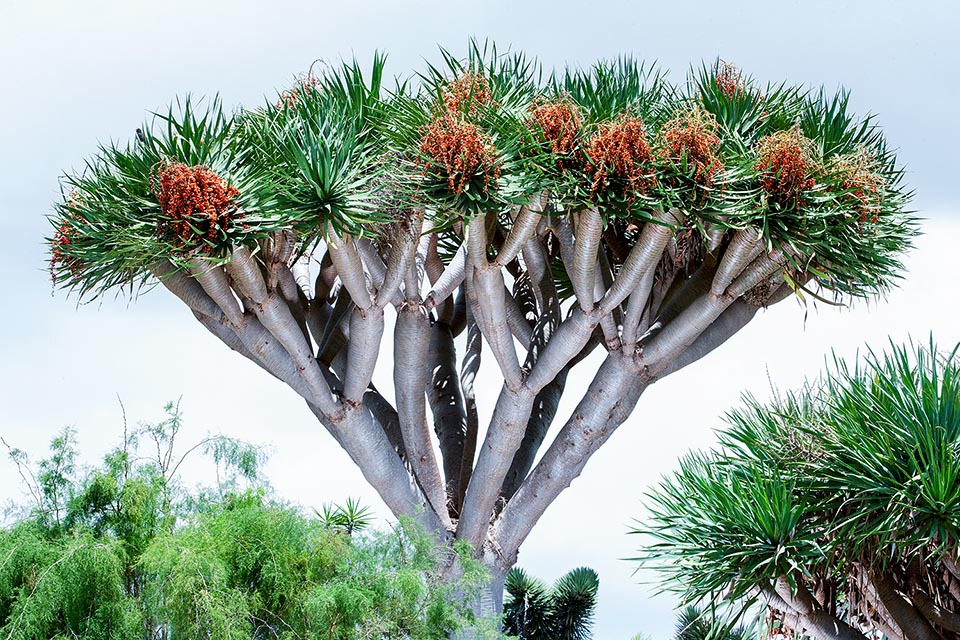 These are monocotyledonous plants vastly distributed in the temperate and tropical regions. To them belong herbaceous, shrubby plants and sometimes arborescent due to a particular growth. The stems can be at times flattened and photosynthetic (phylloclades). The leaves are usually alternate and spiralled along the stem, or arranged in basal rosette, simple, with entire margin and parallel veins, sometimes petiolated, sheathed at the base, without stipules.

The inflorescences are big and loose, at times reduced to one unique terminal or axillary flower, carried by phylloclades. The flowers are pedunculate and usually small, bisexual, refular, with 6 campanulate tepals. The stamens are 6 and the ovary is superior. 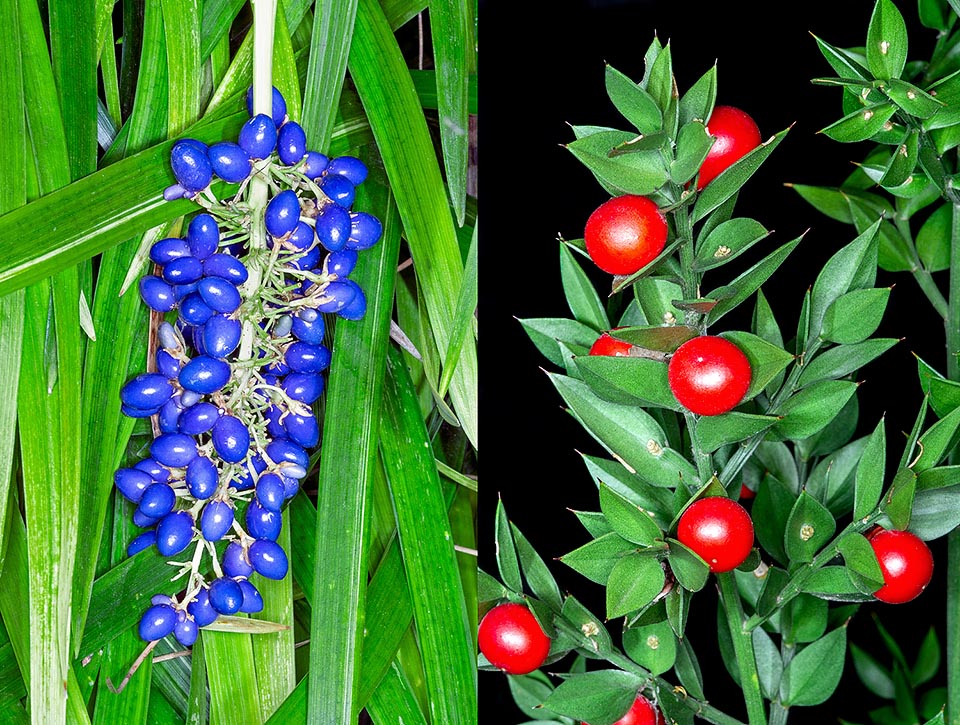 Some Nolinoideae, like Ophiopogon japonicus and Ruscus aculeatus give their seeds to the birds with gaudy berries that surely don’t go unnoticed © Giuseppe Mazza 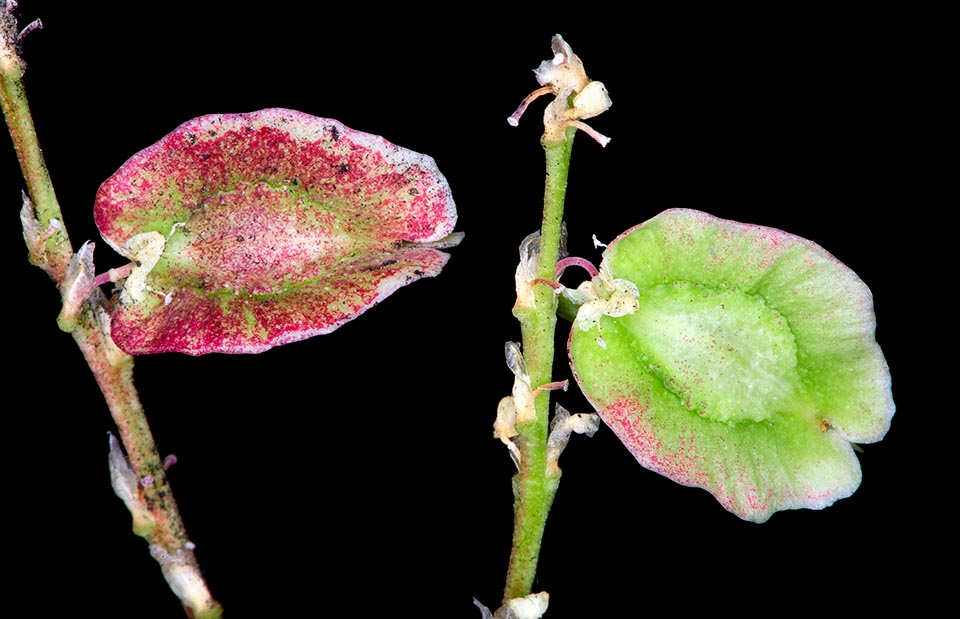 Other Nolinoideae, like Beaucarnea and Nolina, have small winged fruits for an anemophilous dispersion © Giuseppe Mazza

Some species are dioecious, with male and female flowers on different plants (i.e. Ruscus). The small flowers are pollinated by the insects, particularly by bees and wasps, in Aspidistra the fleshy flowers, of purple colour, often hidden by the leaves, are pollinated by invertebrates crawling along the ground. The fruit usually is a coloured berry dispersed by the birds with few seeds or less globose, having no phytomelanin. In Nolina and Beaucarnea the fruits are dispersed by the wind. They can hold a significant ornamental value and for this reason are cultivated, in dark blue colour in Ophiopogon, and red in Ruscus. Various species of the genera Beaucarnea, Dasylirion and Nolina are utilized as ornamental plants 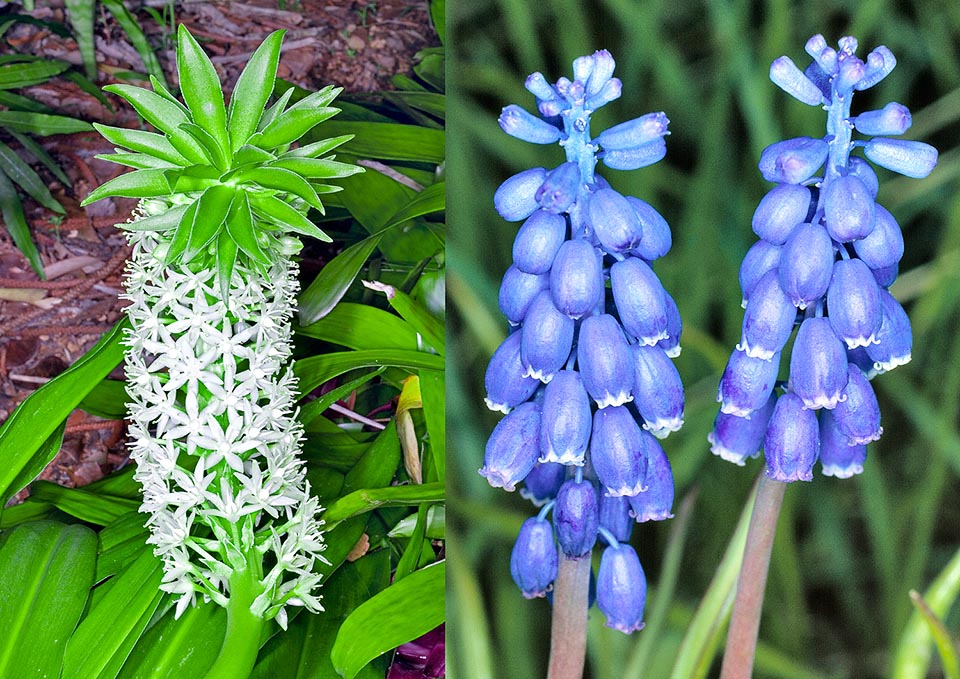 Eucomis comosa and Muscari armeniacum belong to Scilloideae subfamily or, after some authors, to Hyacinthaceae family © Giuseppe Mazza

It is a vast subfamily of perennial bulbous plants by some authors considered as a separate family inside the order Asparagales with the name of Hyacinthaceae. The Scilloideae are mostly present in all parts of the world having a Mediterranean climate.

They have fleshy, mucilaginous leaves, simple, alternate, with entire margin and parallel veins arranged in basal rosette. The flowers, arranged in inflorescences (racemes, spikes and capitula), are hermaphrodite, actinomorphic, with 6 tepals, often eye-catching, of white, yellow, violet, blue, brown and even black colour, with 6 stamens (3 in Albuca) and with superior tricarpellate ovary.

The fruits are capsules with loculicidal dehiscence whose opening occurs in correspondence to the median vein of the carpels. The seeds have various shapes, black due to the presence of phytomelan. These plants produce poisonous compounds (bufadienolides and cardenolides) that, if ingested, may cause death for cardiac arrest. In this subfamily there are present many garden plants with spring blooming such as Hyacinthus, Hyacinthoides, Muscari and Scilla. Summer and autumn bloomings can be found in Galtonia and Eucomis.