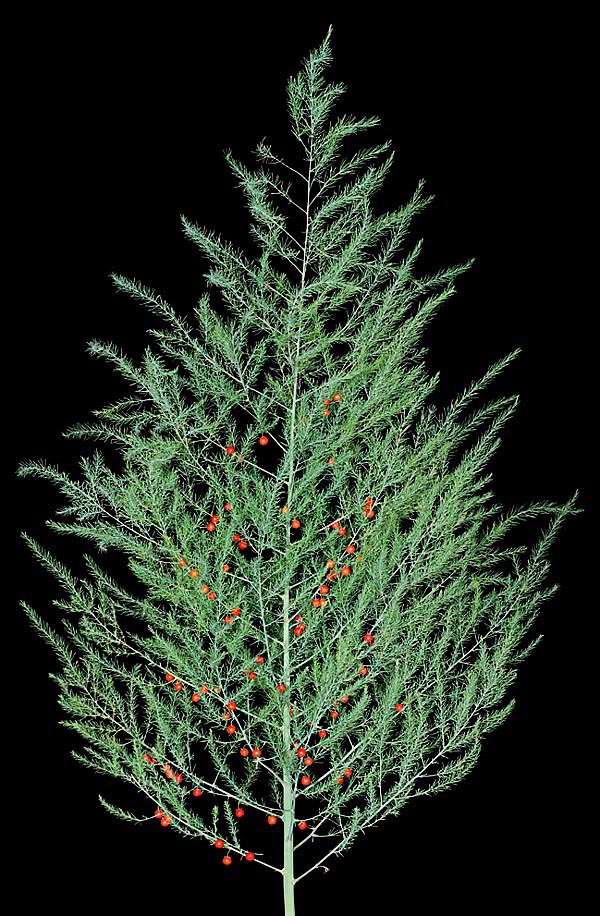 An odd Christmas with pom-pom? No, it's an Asparagus officinalis full of fruits © Giuseppe Mazza

The asparagus (Asparagus officinalis L. 1753) is a species with Euro-Mediterranean distribution, particularly along the coasts, with north-eastern expansions (area of the vine), naturalized in Australia, New Zealand, NE Europe, Canada, USA, Bolivia, Ecuador, Argentina and Uruguay and cultivated in many other countries.

The genus includes about 300 species of the temperate and warm regions of Europe, Asia and Africa.

The name comes from “asparagos”, Greek term derived from the Persian “asparag” = tip, sprout, used for indicating this plant having edible shoots.

But its origin is controversial: after some should come from “asper” = harsh, rough, with reference to some Mediterranean species of this genus having thorny cladodes; after others, from “spargao” = to be turgid, with hint to the edible shoots (turions).

For others, the term should come from “I do not spread, I do not sow”, due to the fact that this vegetable normally is not sown but is multiplied by vegetative propagation, burying the “crowns”, that is the short rhizomes with the roots.

The name of the species offcinalis comes from the Latin substantive “officina”, term used for most of the plants having medicinal properties, employed in the “officinae”, as the pharmacies of yore were called.

The leaves are little visible because extremely reduced and are replaced by cladodes (very transformed and capable of photosynthesis) which develop at their axil.

The flowers, at the base of the hermaphrodite or unisexual (male and female on different plants) branches, are small, solitary or paired (rarely 3-4), at the end of a thin articulated peduncle of yellowish white colour. Almost translucent, bell-shaped and drooping, they show ovate-oblong petaloid divisions and measure about 5 mm with 1,5 mm anthers, almost as long as the filament. The flowering usually occurs between May and June.

The fruits are small (10-14 mm) berries, initially green, then scarlet red up to brick red when ripe, containing 1-4 black seeds. 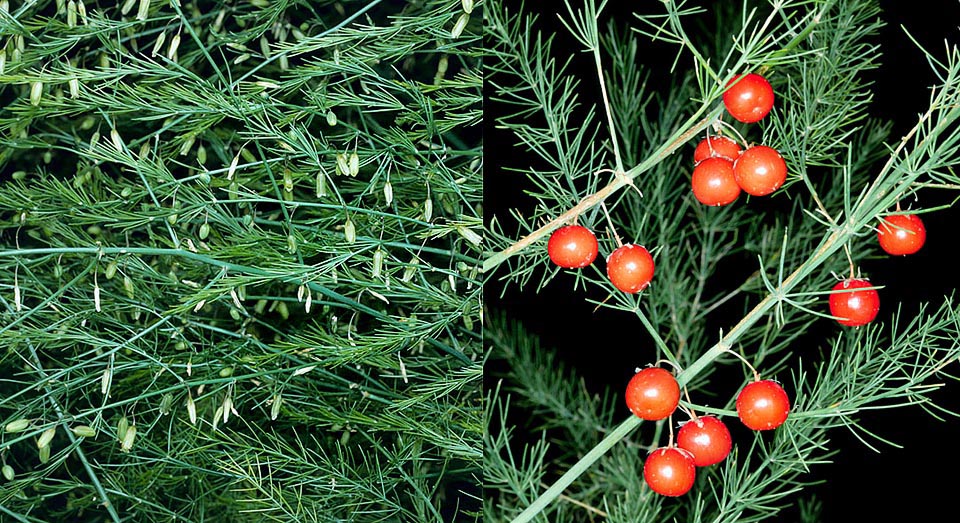 Its habitats are the sub-Mediterranean woods with downy oaks and chestnuts, the thermophilic beech woods, the clearings in the deciduous riparian woods, the grassy or wet sandy locations, cultivated in the orchards and often sub-spontaneous (0-600 m).

Represented in the Egyptian bas-reliefs, known in the old Greece and inevitable appetizer in the lavish Roman banquets together with other species of the genus (Asparagus tenuifolius, Asparagus acutifolius). 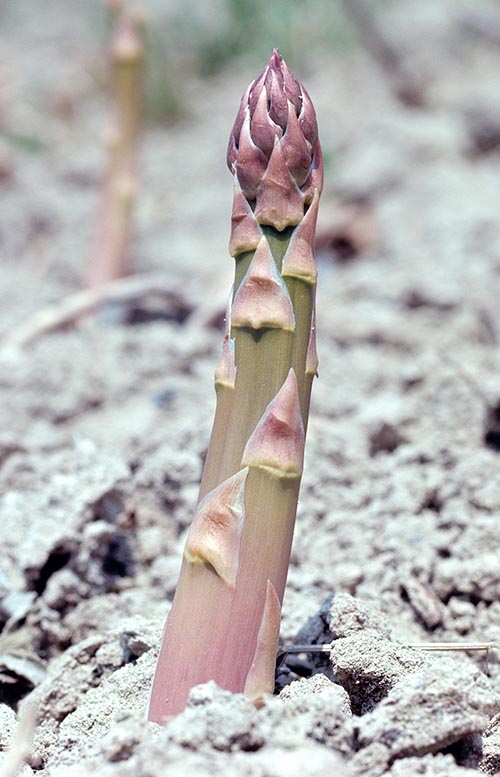 The shoot is a vegetable for gourmets, but must not exaggerate © Giuseppe Mazza

Probably through mass selection came the best strains and from here the numerous appreciated varieties nowadays cultivated and widely present on the market in several cultivars, green, white (grown keeping the buds in the shade), violet, thin or giant for all taste.

Still now, the asparagus is considered a vegetable for gourmets.

At the time of Martial the most appreciated variety was that coming from the surroundings of Ravenna, even if he wrote in this respect: “Asparagi mollis in aequorea quae crevit spina Ravenna, non erit incultis gratior asparagis” (The asparaguses with the soft spines growing in the swamps of Ravenna will not be more flavourful than the wild asparaguses).

The rhizome and the roots harvested in March are utilized in phytotherapy due to their diuretic hydruric (elimination of water and chlorides) properties due to the contents of the amino acid asparagine, which is the cause of the unpleasant smell given by the asparaguses to the urines due to one of its derivates: the methyl-mercaptan; arginine, choline, rutin, one ethereal oil, fats, resins, mucilages, sugars and potassium salts, gallic, cholic and glyceric acids, bromine, magnesium, manganese, vitamins B1, B2, B9, C and PP.

The cultivation is done in the asparagus fields, preparing well drained and loose grounds with a deep ploughing and planting the so-called “crowns”.

The asparagus requires neutral or slightly alkaline soil, in any case with a Ph not less than 6; it well bears the cold and begins producing gradually starting from the 2nd-3rd year.

The harvesting is done by hand with special tools which cut the turions under the soil just over the rhizomes. The demand is remarkable.

We wish to remind that it is strongly discouraged the excessive consumption of asparaguses and the herbal employment to the persons suffering from albuminuria, anuria, kidney stones, cystitis, gout, nephritis, prostatitis and in the kidney and bladder diseases.

Decoction to increase diuresis and facilitate the elimination of the chlorides

A spoonful of crushed roots in a pot of water. To boil for 15 minutes, allow to cold down, drink thrice a day sweetening with honey.

Steamed shoots, as depuratives of the blood and as diuretics

Put the shots (the known “asparaguses”) on a net or a metal colander suspended over a pan full for one third of water and leave cooking with the steam covering the whole. Then season to taste with olive oil, salt and lemon. 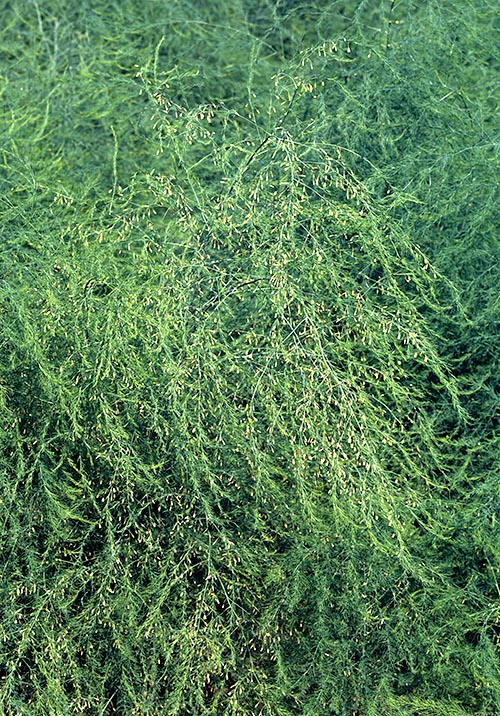 Nothing hazier than a field cultivated with blooming asparaguses © Giuseppe Mazza

In cooking the asparaguses are suitable for numerous preparations; the important thing is that they must be fresh and turgid.

The thin ones (young ones), which usually are less expensive, are tasty and are suitable for preparing risottos, pasta, cold rice, omelettes, meatballs, etc.

The most prized varieties, with great and tender shoots, are on the contrary, the best for the classical steam cooking or in water.

Being the tips softer and more delicate than the basal part of the turion, it is suggested not to bind tightly but in bundles the asparaguses and place them vertically in a cylindrical pan with the water up to little more than half in such a way that the boiling water, in about 15-20 minutes depending on the size of the asparaguses, can boil the base, whilst the tips will be cooked by the steam.

They go together with eggs boiled little more than the hard boiled ones, or seasoned with oil, melted butter and Parmesan, with the Dutch, Maltese sauce, vinaigrette, etc.

They are very tasty also if cooked al dente, breaded and fried in the butter like cutlets.