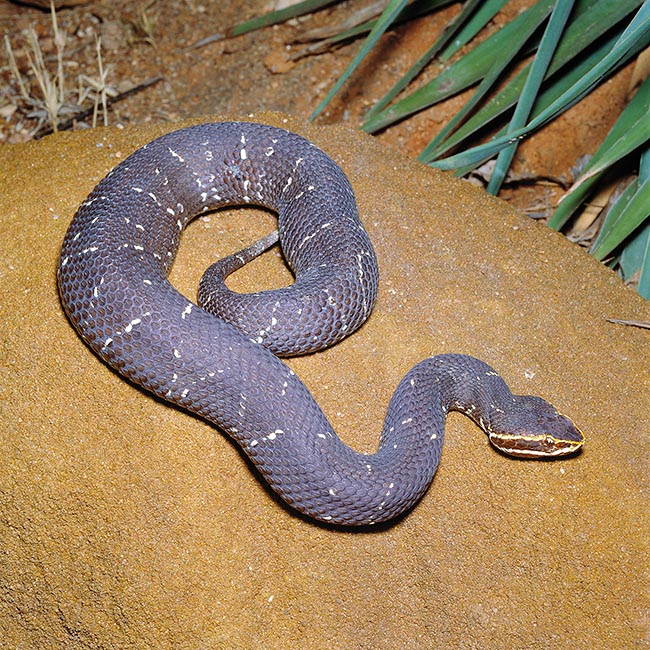 The Cantil, or Mexican moccasin (Agkistrodon bilineatus Günther, 1863), belongs to the family of the viperids (Viperidae), subfamily of the crotalines (Crotalinae), and genus Agkistrodon, like the North American copperheads and the water moccasins.

Indeed, it has in common with these ones some characteristics, such as the triangular head with a more pointed apex in comparison with the rattlesnakes, absence of rattle and slightly keeled scales, and, like all the Crotalinae it has eyes with vertical pupil, thermo-receptive dimples, solenoglyphous fangs and is ovoviviparous.

It is a serpent with a relatively sturdy appearance, with stocky body but modest length (as an average, 60 cm with maxima of 105 cm for the subspecies russeolus).

Agkistrodon bilineatus bilineatus has a more sober livery and much less elaborate than that of the Agkistrodon bilineatus taylori. Usually, it has a brown, brownish, anthracite grey and even uniform black, with paler transversal stripes, which do not appear continuous but interrupted in several points, so much to rather look like a speckling. The youngest specimens do have, as is the case of the water moccasin, a more distinguishable and evident pattern than the adults and the tail has the extremity of a bright green or light yellow colour: this characteristic is related to the diet of insectivorous type in the immature individuals, and the tail, as is the case of other species, serves as bait for attracting the insects close to the … fangs. Laterally, the head has two pale, or well white, lines, horizontal and almost parallel, one over and the other one under the eye, converging towards the apex of the snout: the eye is in such way included in a dark area corresponding to the cheek. 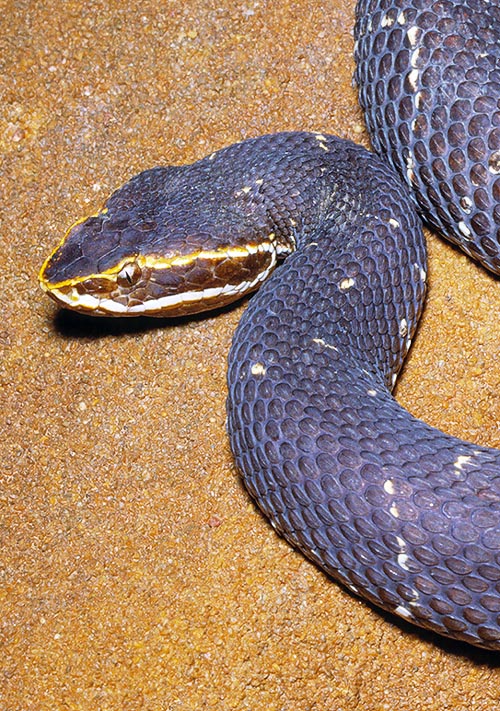 Typical are the two pale, yellow at times, bands over and under the eye © G. Mazza

If this reptilian is seen from above, the two supraocular white stripes (yellow in the subspecies taylori) seem to frame the profile of the head, accentuating even more its triangular shape, if, on the contrary, it is observed from the front, the snout appear ornamented by a white star, formed by the convergence of the aforementioned facial lines.

The word Cantil comes from a central-American language (of Aztec origin, perhaps?) meaning “yellow lip”, but the yellow or golden colour is more frequently present in the subspecies “ornate or Taylor’s”.

The most common subspecies, the common cantil, is present in Mexico, El Salvador and Guatemala, loves areas with rather thick vegetation, forest included, and nourishes of small and medium-sized rodents, amphibians and, occasionally, of other reptilians and has not a particularly aggressive temper, preferring to flee instead to face a possible danger.

However, if obliged, it may bite with amazing speed and with such an enthusiasm to jump ahead for the whole length of its body.

The fangs, which may be folded on themselves on the palate, are relatively long seen its size, but rarely do exceed the 4-6 mm, which are more than sufficient, in any case, for injecting the venom fairly deep.

The venom is cytotoxic and haemo-toxic, slightly more powerful than that of the water moccasin, but is excreted and injected in lesser quantity, dangerous for the man and potentially fatal, even if the cases of serious poisoning are not many. Amongst the effects prevail the oedema and the necrosis, often with haemorrhages and possible thrombotic phenomena. These general characteristics are common, with some possible minor variations, with the various subspecies listed hereunder.

The “ornate” subspecies (Agkistrodon bilineatus taylori) has lively transversal bands of gold or bright yellow colour and the facial stripes are also of the same colour. It is, without any doubt, the most beautiful and striking subspecies.

The subspecies Agkistrodon bilineatus russeolus is typical of Yucatan and of Belize and is the largest one (100 cm), with a reddish or brick coloured livery and thin white transversal bars delimiting alternate bands of a slightly paler and darker colour.