The Aglaonema crispum (Pitcher & Manda) Nicolson (1968) is native to the island of Luzon (Philippines).

The name of the genus is the combination of the Greek wordings “aglaos” = bright and “néma” = thread, with possible reference to the glossy stamens of the flowers; the Latin name of the species “crispum” = corrugated is probably referred to the corrugated edges of the foliar sheath.

Perennial herbaceous, evergreen, it forms an erect stem tall up to 1-1,2 m, and with a diameter from 1 to 3 cm, with internodes of about 1 cm; coriaceous leaf with a 6-18 cm long basal sheath, 10-25 cm long petiole ending with an elliptic leaf holding a sharp apex, 15-30 cm long and 6-15 cm broad, with the borders of a dark green colour with an ample silvery green variegation in the centre.

Inflorescences on 5-12 cm long peduncles, formed by a spathe initially green, which changes later on to the yellow and finally to the black, long about 6 cm and 2-3 cm broad, and a 2-3 cm long spadix with the female flowers occupying the inferior part for about a tenth of its length, and the male ones the remainder. The fruits, when ripe, are red berries, long about 2 cm.

It reproduces by seed, division, apical cutting or portions of stem having at least three nodes, vertically placed or horizontally interred for a half, or little more, of its thickness. 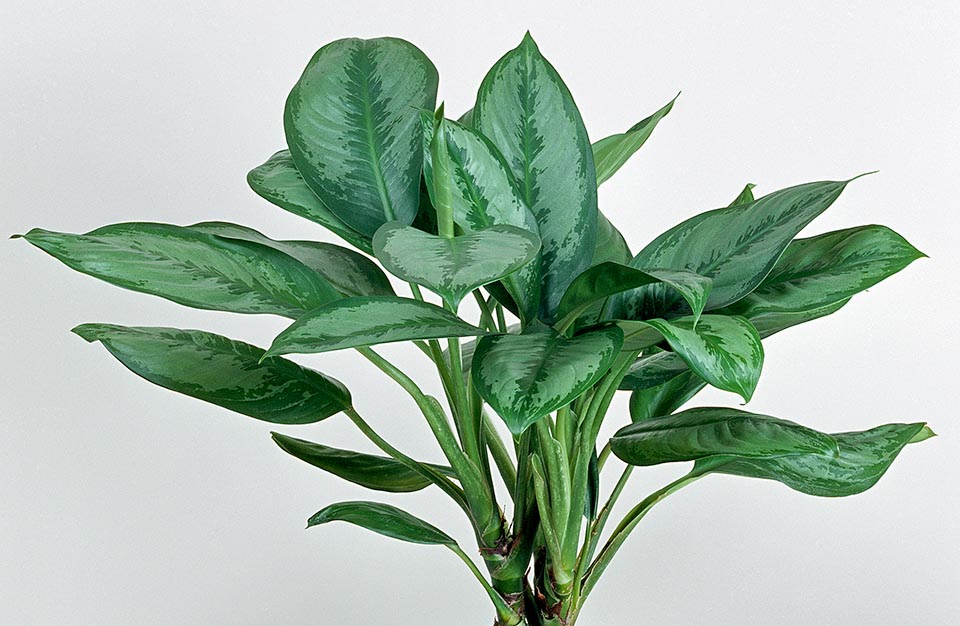 The plant is cultivable in open air in humid tropical zones in a shaded location, on draining organic substrata, elsewhere, it is cultivated in pot and as such it’s much appreciated for indoor decoration thanks to its highly ornamental foliage.

Although it tolerates a shady position, a luminous, but distant from the direct sun, one will exalt its variegation. The substratum must be organic, with addition of sand or agriperlite, porous and well drained in order to avoid roots rottenness.

The temperature is to be kept more than 14-16°C, best around 20-22°C, avoiding sudden variations.